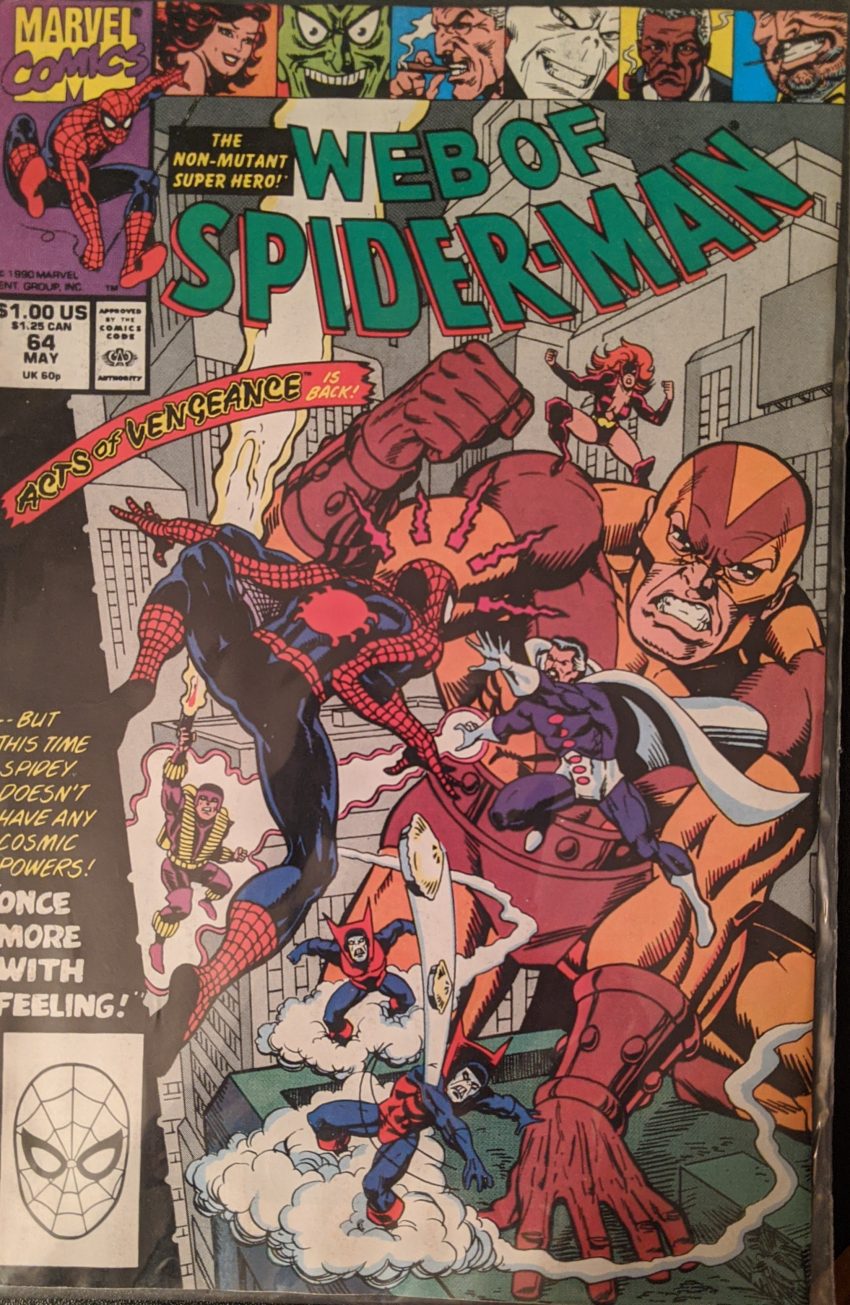 Well, that seems bad. Graviton alone was able to humble our hero before. And look, character boxes. This one begins following a van carrying Titania, Trapster & The Brothers Grimm to The Vault. Titanis rightly tells the others they’re all losers, and insists unlike them, she could’ve beat Spider-Man if he hadn’t been all juiced up (Seems unlikely). Then Graviton shows up and busts them out. The Vault’s staff has been made to look like complete buffoons lately. The Carrion thing, Venom’s break out, and this all right on top of each other. Graviton wants them all to team up to get some payback.

Here we go with the photos, finally.

When we joined that scene in Web 63, Peter was hanging upside down from a web as Spider-Man, and Nick was already there. We don’t know how long he was watching, but the fact that Nick didn’t figure out Peter is Spider-Man really tells you all you need to know about that guy.

Really, Peter? You don’t think there’s anything weird about your way of making money?

Is no one going to consider that Katzenberg was sneaking around on private property taking peeping tom photos? Surely that’s not legal. Ah, well, soon Spider-Man is swinging across the city recapping the last few months of all his titles, and in his little tantrum doesn’t even see The Green Goblin fly by. Hm. That can’t be good. Meanwhile, all the D-listers are on a seemingly abandoned oil tanker, which turns out to be the elaborate hideout of The Chameleon, who offers them $100,000 each to kill Spider-Man.

Goliath is downstairs, trapped at 60 feet tall since Spider-Man zapped him in Web 60 and ready for revenge. Elsewhere, Peter & MJ are enjoying some takeout, and MJ suggests Robbie is lashing out at Peter’s breach of ethics out of guilt over his own (The whole Tombstone thing) which… seems like a reach… but then the news tells them The Daily Bugle is flying… again… so dinner is cancelled. Spidey arrives on the scene, and Trapster is waiting for him.

Titania shows up outta nowhere to sock our man in the jaw, and Graviton just watches for awhile. All he’s gotta do is stick Spider-Man to the ground, why isn’t he? Spidey recovers, and then Graviton finally does make him heavy, dropping him into wet cement. We do Spider-Man Must Lift A Heavy Thing, only the heavy thing is himself. But even as he does so, Goliath’s giant foot comes crashing down on him.

Spidey thinks about how he’s close to passing out from the beating he took, and hopes to get them to fight each other as they catch up to him in an alley, Graviton once again just forgetting he could stop this any time he wanted to.

After almost 3 decades of cliffhangers with Spider-Man falling to his death, we get one where he’s going the other way! Who says you can’t teach an old dog new tricks?