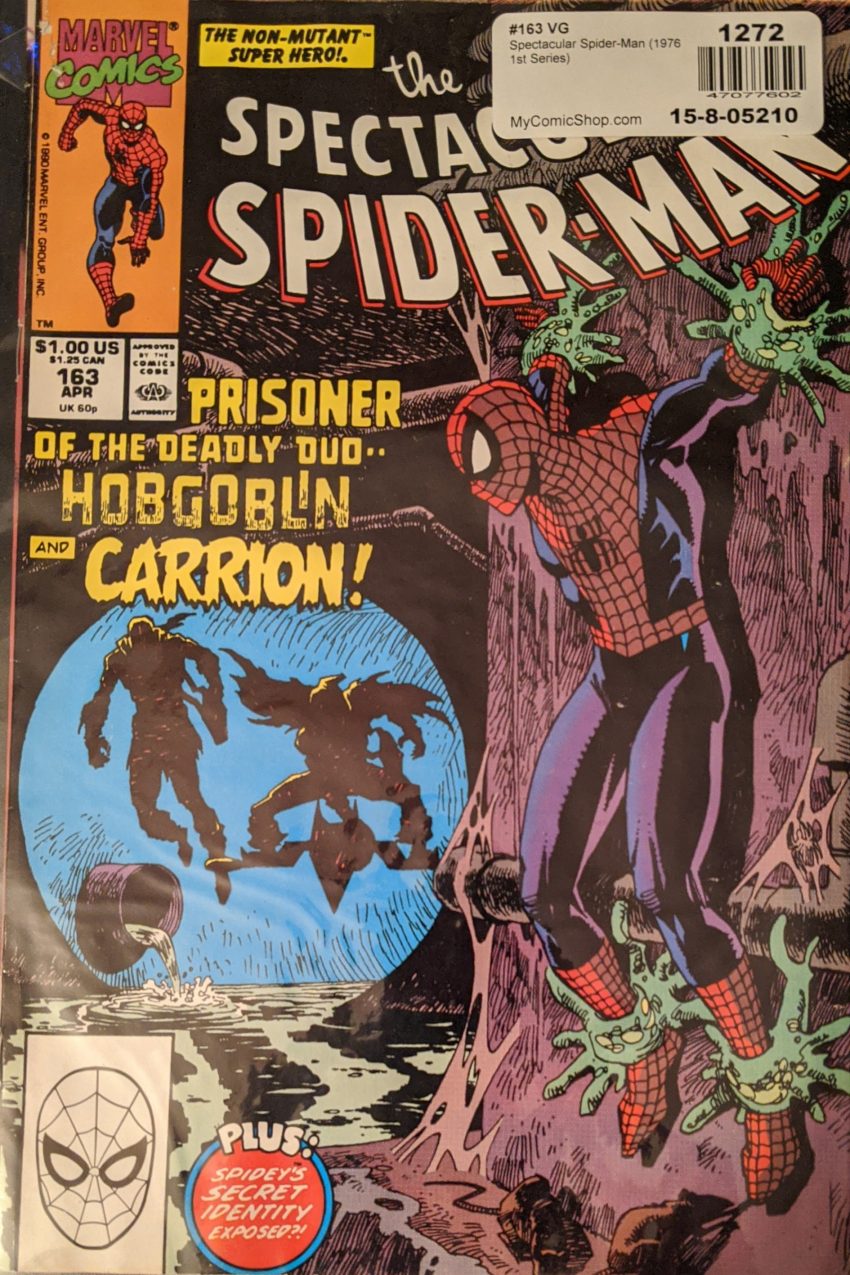 The Deadly Duo! Not sure that’s gonna catch on. As this one begins, someone somehow took a picture of Spidey being dragged into the sewer last issue, and it’s on the news, and MJ is freaking out a little. Understandably. But, as she tells herself, “Mary Jane Watson-Parker isn’t the sort of woman who can sit around sniffling while her man fights for his life,” so she springs into action.

Nick Katzenberg: Class act. What’s MJ gonna do? Well, as it turns out…

Sal Buscema can’t draw, like, garden variety action. He’s got superheroes in his blood, and if someone throws a punch, it looks like they could crack the moon in half. Even when it’s MJ punching a sleazebag. Anyway, down the sewer, Spidey’s stuck in “ectoplasmic shackles,” like on the cover. Hobgoblin says he’s gonna find someone to pay them a lot of money to kill Spider-Man, and then they’ll kill Spider-Man. This is perhaps the very best excuse for the villain not just murdering the unconscious hero I’ve ever seen. Hobby’s a mercenary, after all, why kill Spider-Man for free? With Hobgoblin gone, Spidey gets Carrion talking about his past life. He says he thought seeing his mother would help him remember, but it didn’t, and now what memories he has are starting to fade. Meanwhile, MJ busts into a fancy pants restaurant, not taking “no” for an answer.

Fireheart recaps his debt to Spider-Man, and says he’s repaying it with his gambit at The Bugle, and it has nothing to do with saving his life. MJ says he wants Spider-Man dead, calls him a hypocrite, and leaves. Pretty cool of her to try that angle, tho. Smart. Elsewhere, Hobgoblin is trying to sell Hammerhead Spider-Man’s death, but he’s mad that Hobby failed to kill Joe Robertson, not knowing Tombstone is the one who stopped him. He says bring him Spidey’s head and they’ll talk, so Hobby leaves. Now’s the part of the show where Spider-Man appeals to the Macolm McBride trapped inside Carrion and such. Except he doesn’t do that at all. Instead, he starts goading him, calling him a monster, telling him his mother would never recognize him, telling him he’s too scared to learn the truth about himself.

Weirdly, now that he’s free, Spidey totally tries the “appeal to his better nature” route as they fight, and it’s not working because he made Carrion so mad. Maybe shoulda tried that in reverse order. Spider-Man collapses part of the tunnel on top of Carrion to try to stop him and feels bad about upsetting him earlier, but that’s when Hobgoblin comes back, and the fighting begins again. Up top, authorities are already trying to figure out what caused this giant hole in the road Spider-Man made outside the McBride residence, and MJ sneaks into the house to appeal to the mom.

Hobby starts taunting a now dazed and slowed Spider-Man prior to the kill as MJ & Mrs. McBride run out. Carrion floats up to the street behind them, and Spidey shouts a warning.

Hey, whaddayaknow, the deaths of Carrion and Hobgoblin. Both gone forever. Mm hm. They sure do gloss over Mrs. McBride having an easily identified TV star come into her house saying she loves Spider-Man, but I guess they were out of pages. This issue features a letter from Ben Acker. Probably the same Ben Acker who grew up to co-create The Thrilling Adventure Hour Podcast and eventually write some comics. Been a while since a famous name appeared in the letters. He liked Cosmic Spidey and does not like Sal Buscema. Poor Sal.