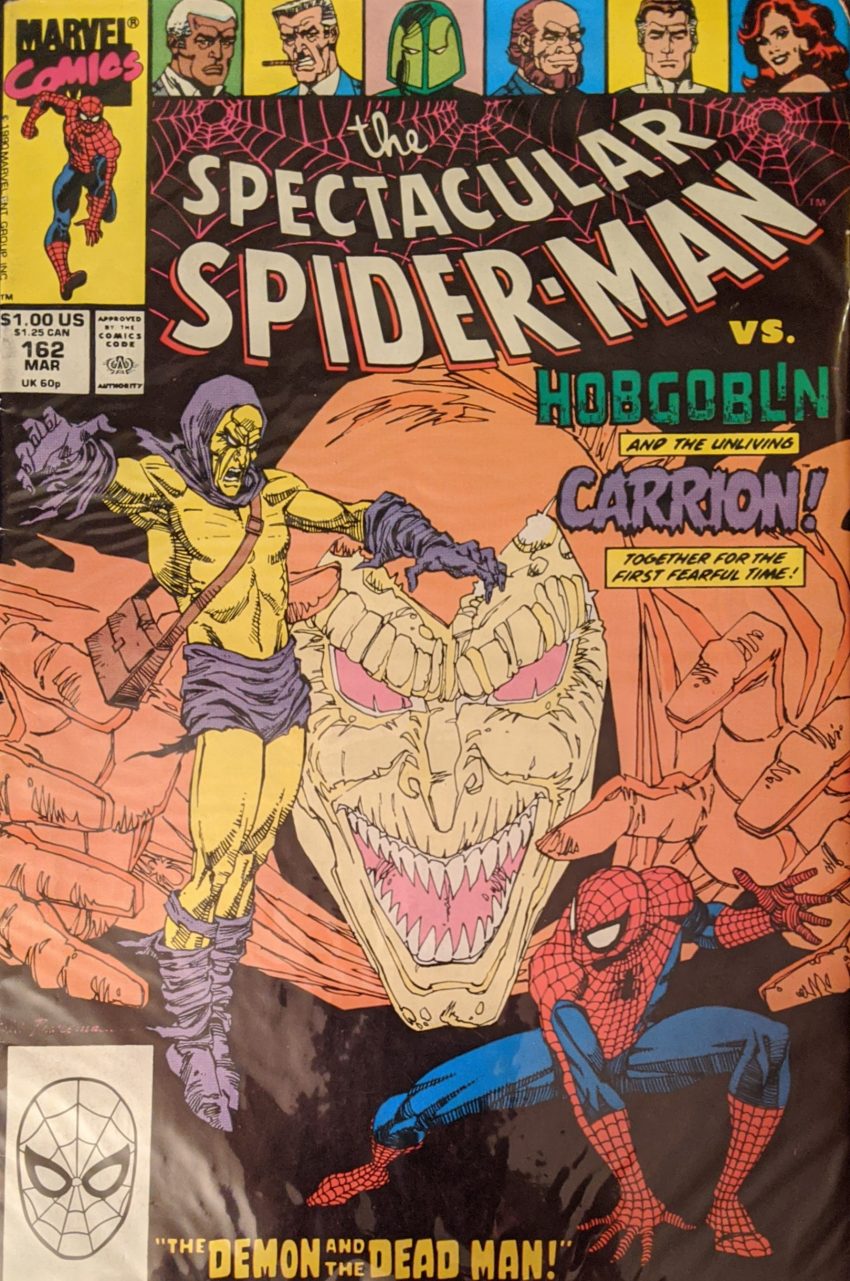 Back for more with Hobgoblin, and soon Carrion. We open on Hobgoblin attacking an armored car delivering a prisoner to The Vault, the supermax security prison for supervillains that nevertheless seems to get broken into or out of all the time. Hobby starts chucking bombs at the van, and then at the guardsmen who come out, and eventually tears the back open, marveling at how anything could survive the freezing cold temperatures of the prisoner compartment. A guardsman who survived gets him in a surprise headlock, but unfortunately for him…

I talked about this is some other post once, but look at these 2 together. I was 100% certain Carrion must be related to The Goblins somehow when I first saw him as a kid. No question! He even has the purse! But no. Hobby produces a little doll of Spider-Man? So Carrion can wither it, too? And that convinces him to team up with Hobgoblin and kill Spider-Man. Uh, ok. They fly off into the night.

Reed says whoever broke in seems to have only taken his notes on Carrion, and then Spidey finds part of a pumpkin bomb, so he knows what’s up. He swings to ESU, furiously recapping the history of Carrion as he goes.

Peter using the comic nerd move of calling him “Carrion II” like he’s writing for The Official Handbook of the Marvel Universe amuses me. Then it’s time for Gerry Conway to yet again remind us he has no idea how Peter’s Spider Sense works.

Where was the danger?? It doesn’t do that! Anyway, we move down to a sewer, where Hobgoblin has made a home for himself (Sal Buscema sure ends up drawing a lot of dudes living in the sewer in his long and illustrious career). He’s been showing Carrion the files on himself. Until now, he believed he was a clone of Miles Warren, but now he dimly remembers his real life. He wants to see his mother, so Hobgoblin says he’ll take him home. Meanwhile, at JJJ’s apartment, Joe Robertson is visiting, and JJJ is talking about how Fireheart offering him the publisher job at The Bugle is something he can’t match at his magazine startup, and he’d never stand in Joe’s way if that’s what he wants. But he offers him a job, anyway.

MJ tells Peter if he feels bad about keeping what happened to Malcolm a secret, he’s got to tell his family, and he agrees. He heads off to do that as Spider-Man. Soon, Carrion comes up out of the sewer outside his mother’s house and floats up to a window.

Yikes. As the fight continues, Spidey says they can work together to cure Carrion, but he says with his inherited knowledge of genetics from Warren, he knows he can’t be cured. Spider-Man keeps trying to convince him there’s hope, but it turns out this conversation, which lured Spider-Man near the manhole Carrion came out of, is a distraction.

Why would his demonic nature dampen his Spider Sense? Good grief. Next issue, we’ll see what happens to Malcolm, but as we’ve seen in 90s posts, no matter what happens, there’s plenty more Carrion in his future. It is with great sadness that I report this issue features a letter from Brian Corvello. I can only assume he gave up on being “Bananas.” Aw, Brian. You had a good thing going.