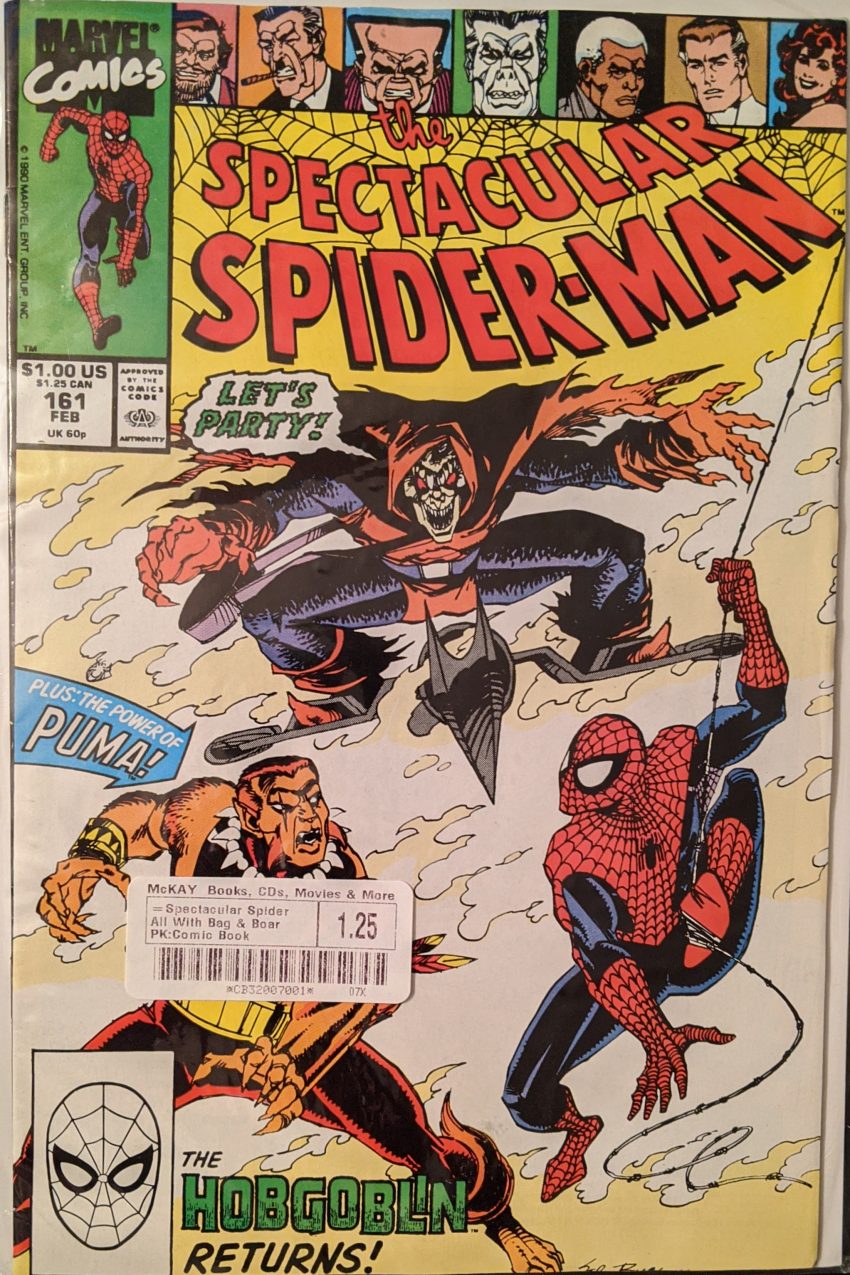 Is this the first appearance of this very brief experiment with the head boxes? This only lasted a couple months, but  little boxes with characters appearing in this issue started popping up on the covers of the Spider-Titles. And I think only the Spider-Titles, I don’t think it was a Marvel thing. And it disappeared pretty quick.

Hurray! Joe’s long, totally unfair nightmare is finally over. And Sal is back to inking himself to mark the occasion.

It’s kind of funny to me that the whole Daily Bugle cast is there. It’s everyone we know who knows Joe, but surely he knows people outside of work besides his wife and son. Anyway, it’s Tombstone & Hammerhead setting off Peter’s Spider Sense as they drive by the prison. They somehow know Robbie has been pardoned. Hammerhead thinks it’s not fair that Joe is a free man while Hammerhead is a fugitive (How? Show your work), and thinks he’ll have to do something about it as they drive away. Isn’t this prison in DC? How is everyone here?

Spidey further catches Reed up on how Malcolm McBride is the latest host to Carrion, and how he would like Reed to try to find a cure him. Then he leaves, and so do we, to a fancy restaurant at night, where a mysterious weirdo who is obviously the newly demonic Hobgoblin is trying to go see “Mr. Hammer,” but security is not into how creepy he looks.

That’s hilarious. Hobby handily defeats that guy and 3 more equally gigantic thugs before continuing on to meet Hammerhead & Tombstone. Hammerhead wants Hobby to kill Joe Robertson. Tombstone objects, but Hammerhead says he’s too involved. For $25,000, Hobgoblin is off to kill Joe. Seems pretty cheap. Meanwhile, the whole gang is at Randy Robertson’s house in Queens (Except a late Peter Parker) to celebrate Joe’s freedom. He’s telling them all he owes his life and his newfound will to live to Bruiser, and asks that they never forget him, which is nice. They present Robbie with a gold plated pen that JJJ bought for him.

Fireheart makes the very reasonable point that he doesn’t have time to handle the day-to-day operations of a newspaper. Joe is pretty shocked, and goes outside with Martha to discuss it, while JJJ fumes. The newly reunited couple share a tender moment, but it’s not gonna last…

Robbie tries to get Martha to run for it, but there’s no way she’s leaving him just after getting him back. Everyone runs outside, and in a fun turn of events, since Peter’s not there, MJ quietly demands Fireheart turn into Puma, since she knows his secret, and he agrees. Hobby is about to kill a defiant Joe, who refuses to run, when a mystery man who’s obviously Tombstone shoots the razor bat out of his hand.

That’s a neat trick. Say, isn’t this a Spider-Man comic?

There we go. I really like how Sal handles the denser web pattern on Spidey’s suit in this period. What a pain to draw, but he really does it right. Spidey grabs onto Hobby’s glider as Puma gets a 2nd wind. Hobgoblin tries to fly Spider-Man into a nearby billboard, but he hops loose and latches onto it. Improbably, the notes he took from Reed’s lab come out of his… pocket? He doesn’t have pockets… and flutters into Hobby’s hand. He stashes the paper or later as Puma charges him again.

Complicated! This story is just getting started, running for a couple more issues of Spectacular, so come back for more.