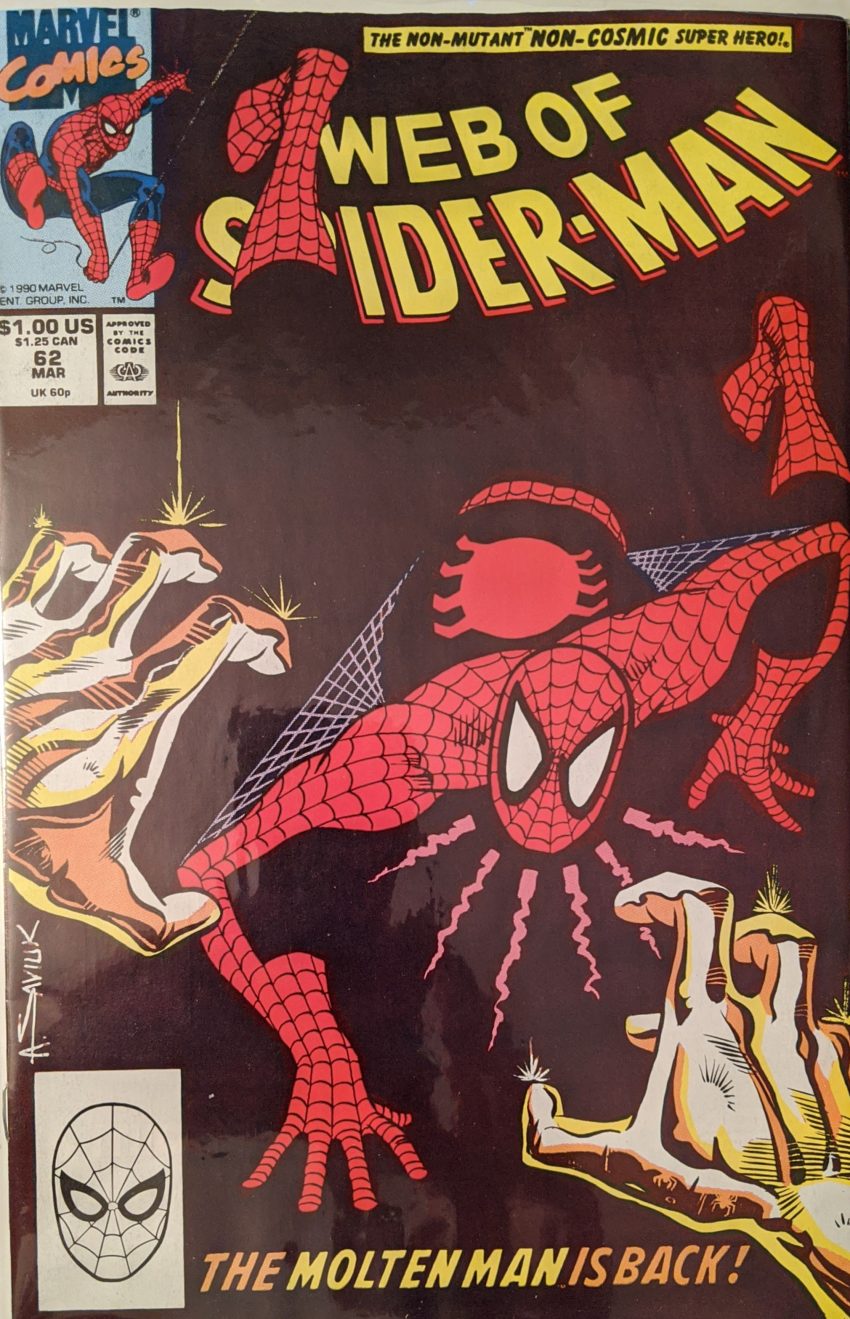 As this issue, by the usual suspects, begins, Spider-Man is back in a sewer, searching for someone. No one should be in sewers this often. The bit is it seems like he’s hunting a villain, but it is also obviously a bit, and then…

I genuinely love New Yorkers who believed everything JJJ said about Spider-Man in The Bugle switching to just believing everything Thomas Fireheart says about Spider-Man in The Bugle. He thinks about this as he swings by a Bugle billboard (that shows him posing with some nuns!?!?!). Something sets off his Spider Sense, but the only people around are a guy buying a hot dog from a vendor, so he chalks it up to nerves.

The Spider Sense. Warns him. Of. Danger. Where is the danger? Can a man not enjoy a hot dog, legally purchased? Spider-Man’s brain is persecuting Mark Raxton! The Molten Man is heading to meet his sister, and doesn’t want to be late. I’m sure Peter won’t see him, jump to conclusions, and start a fight. Back at the building The Parkers and The Osborns live in, MJ is showing Kristy some of her modeling photos, which Kristy finds very funny due to the outfits.

Peter changes clothes in the elevator and heads in to be told Raxton is coming. Kristy asks why Liz can’t just call the cops if somebody’s bothering her, and then Gerry Conway gives Molten Man I believe his first real backstory pre-supervillainy, even though it’s only 2 panels.

Peter suggests the girls go intercept Harry & Little Normie, due to arrive any minute, while Peter waits for Raxton in their place. Liza is very grateful. He makes sure the girls are taking Harry away somewhere and then…

Wut. But wait, it gets weirder.

WUT! He’s gonna get them all evicted! As expected, Spider-Man starts a fight with Molten Man without talking first. In fact, Mark seems concerned that Spider-Man has done something to his sister, and becomes pretty upset. This is peak 1970s Spider-Man. So it’s time for them to smash their way around Harry & Liz’s home for awhile.

Spider-Man can’t really web or hit Molten Man, so he solves his problem by throwing him into the electrical equipment in the elevator, shocking him unconscious. And then… and then this? What?

What happened? Did Spider-Man, having subdued the guy he thought was trying to threaten his friends, just leave? Not call the cops or anything? What… What? That doesn’t make any sense, and that ending is absurd! Oh man, this really did read like a 70s comic. Much more than any 80s material I’ve seen from Conway to date. Wow. But hey, good for Mark. And as we’ve seen in future issues, he really has turned over a new leaf. It’s nice when bad guys get a chance at redemption. You can’t redeem any ol’ villain, of course, but a guy like Molten Man, who’s story is more tragic than villainous, works well.