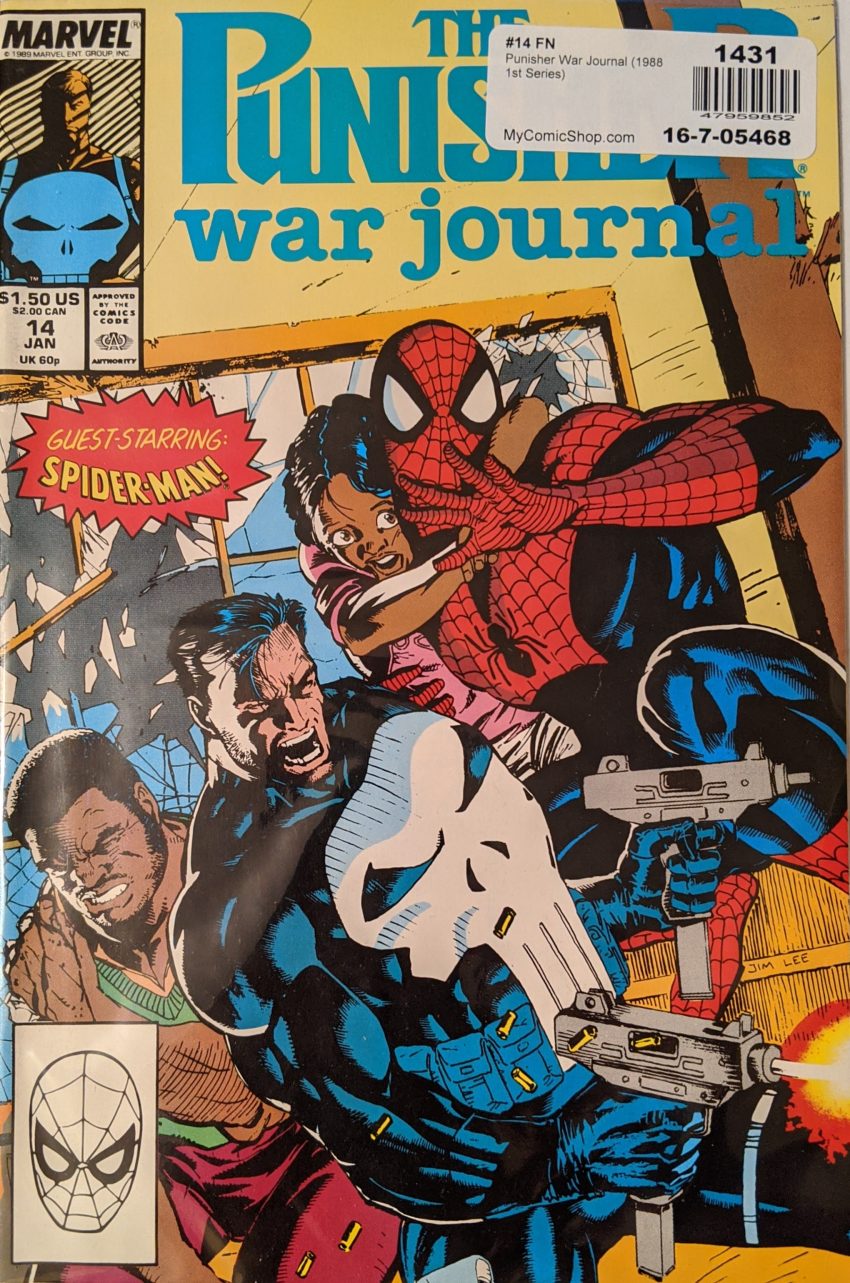 Sadly, X-Men superstar and future DC Comics bossman Jim Lee only provides covers for this 2-part Punisher story featuring Spider-Man. He had been the regular penciler on Punisher, but he’s out the door by now. A shame. He almost never got to draw Spider-Man officially, and I would’ve liked to see perhaps the most influential comics artist of the last 30 years do more with him. Lee’s art style, dramatic and slick but solid and “realistic,” became more or less the standard in comics in the wake of his meteoric rise to fame. His stuff was as different and instantly beloved as McFarlane, Liefeld, Larsen, Whilce Portacio and the other artists shaking up the look of comics in the late 80s, but it was somewhat easier to copy. By the mid-90s, almost everyone was copying him, at every company. Jim Lee’s art (Or, quite often, a terrible imitation of it) was just what comics looked like. Tons of guys who got their first comics jobs shamelessly ripping him off at that time matured and went on to be great, unique artists in their own right (None moreso than the godlike Travis Charest, who got his big break doing a straight Lee impression in the DC Comic Darkstars and is now one of comics’ true fine artists), Plenty of people still walk in his footsteps today, and he himself still finds time to draw some comics when not running DC. His impact is insane. All I’m saying is, I wish he’d drawn the interiors here.

It’s much weirder than that. Written by Carl Potts, colored by Gregory Wright, penciled by Dave Ross, this thing is inked by legendary illustrator Russ Heath! Whaaaat? Famous for groundbreaking 50s comics, Playboy illustrations and commercial artwork, now inking… Punisher War Journal. Is this really him? Holy crap. This opens with a 2-page prologue in the final days of WWII… can I infer that’s because Russ Heath drew a ton of war comics? Did they know he would be inking this? I dunno. A Nazi plan to raise babies into Aryan supermen resulted in a Nazi nurse and 3 potential Aryan children escaping justice after the fall of Germany, and then we jump to the present, where The Punisher is testing some new hardware. In this period, Punisher has a sidekick named Microchip who can build him gadgets and gives him someone to talk to. They drive around in a van killing people. His new gadget is a targeting system in a helmet.

Any personality Frank had in the 70s is long gone by now. He’s a shark, totally dedicated to nothing but killing mobsters. Hey, about that rally down there…

Kate’s not a model, the camera just went off by itself.

Peter Parker circa 1966, checking in. The next day in upstate New York, we watch a young man with a crossbow and an old man in a wheelchair team up to hunt a turkey, which they bring to the Nazi cult for dinner. The leader from the rally is furious at JJJ for “misquoting him” (Boy, that feels familiar) and says the time is coming for their righteous crusade or whatever. He goes out to ask “The angels” for a sign, and a figure we can’t really see appears in the sunset, so the word is given.

I know everyone is taking every chance to draw MJ as a pinup these days, but again, knowing Russ Heath was involved would be a good motivator to jam that panel in. Anyway, JJJ wants photos of the family Micro was warning, because the cops know he’s been harassed. But when Peter arrives at the address, he finds The Punisher locking and loading. Instead of engaging him, he switches to Spider-Man and… checks the back of the house for some reason. Good thing, too, the backyard is full of goons.

Some of the goons get by Spidey and into the house. The family runs to the front door, which explodes as Punisher makes his entrance. That’s pretty rude. You gonna pay them for that? He starts mowing down scumbags in traditional Punisher fashion. As he’s clearing the frankly ridiculous amount of goons who somehow got in and got upstairs in the 2 seconds before he arrived himself, Spidey’s still working out back.

The shooting team of old guy and young guy from earlier draw a bead on Spidey from inside their own van, but when his Spider Sense prompts him to investigate, he finds an old guy in a wheelchair and his caretaker and believes he made a mistake. As Frank returns to his van, Microchip tells him to check the news.

A moral dilemma! A bunch of mainstay Marvel characters in peril! It’s funny to me that Spider-Man and his cast have to provide all the emotional weight because Punisher has no friends, family, or personality. Will the whole supporting cast of the Spider-Man titles be killed in next month’s Punisher? Probably not, but we’ll find out! I saw Dave Ross’s Spider-Man on a few comic covers (Which we will see) and advertisements in this era, and thought his rendition was cool, but his name was never on the work. I was a full grown adult before I found out who he was. His approach to the eyes is pretty unusual, but I like it. And I guess Russ Heath inked several Punisher comics here in the late 80s/early 90s. How crazy. I had no idea.