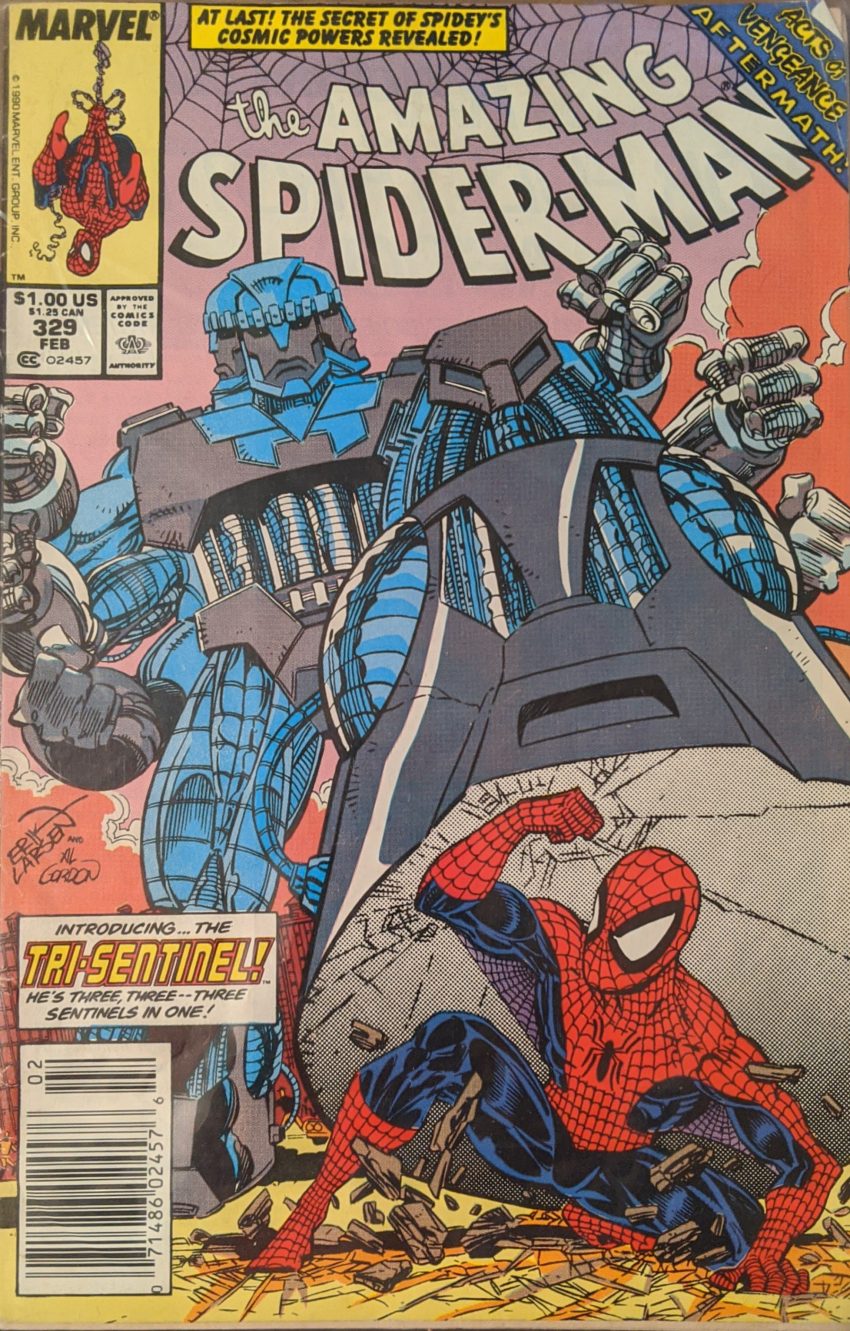 The Tri-Sentinel! Acts of Vengeance is over. Presumably, the bad guys all realized Loki was manipulating them, took their ball and went home. Like I said, I don’t really know. It’s Larsen’s 3rd issue, but first as regular penciler. Andy Mushynsky inks him this issue, David Michelinie and Bob sharen hang in there. We begin “three days ago,” as Sebastian Shaw inspects 3 mutant hunting sentinels which he’s come into possession of.

Seems like trouble! We jump to today, where Peter is helping MJ practice her lines for the soap opera, but he keeps screwing up because he’s distracted by his current deal. She suggests he go indulge his time honored tradition of webswinging to clear his head.

Larsen crams detail into a page like McFarlane and all the other future Image founders, but his stuff feels more grounded. McFarlane’s art has a weird, liquid-y quality to it, and his approach to things like anatomy and perspective is, ahem, loose. Larsen’s stuff is over the top in a more Jack Kirby way. The weird, liquid-y feel and billions of hatchmarks made Todd McFarlane #1 to me as a child, but as an adult, I can easily see Larsen is the better draftsman. Anyway, Shaw is blackmailing Lubisch into trying to use his machine to negate Spider-Man’s new powers. Spider-Man is busy stopping a mugging, something that has never been easier for him, but…

You can really see the Kirby influence there. The Tri-Sentinel!  Spider-Man’s overpowered Spider Sense alerts him to the giant robot flying toward the Amity Point Nuclear Plant, but as he starts flying toward it, Graviton attacks him again. Spidey just blasts him, thinking he doesn’t have time for this, and Graviton goes flying through a water tower before smashing into a parked car, fight over. Now that’s some payback. And then, the game is revealed.

Ta-daa! Captain Universe works pretty much like Spidey thinks to us. The concept was created by Bill Mantlo & Michael Golden in Micronauts in the 70s (and, notably, later drawn by Steve Ditko). It’s had many hosts in the Marvel U, and will have many more after this issue, but since WEB 58, it has been bonded to an unwitting Spider-Man. All bearers of the power find themselves in that outfit. Now that Spidey knows what’s going, he’s also in better control of his power as he reaches The Tri-Sentinel and gets to blasting. But it puts up an shield and deflects his attacks. He tries coating it in his new Can Do Anything Webbing and turning it to steel, but the robot just snaps free, and then damages the nuclear plant in the process.

The Tri-Sentinel hits our man with his true archenemy, gas, but with the full power of Captain Universe, he’s able to resist it for once. He tries to short circuit it with a giant tidal wave, and when that doesn’t work, just hops on its back and starts smashing, but that doesn’t work, either. Shaw finally deactivates the robot. Spider-Man has no idea what happened, he just knows it stopped.

He did it! Pretty cool final shots there.

Dun dun duuuuun! One look at Felicia tells you this is not a coincidence. This was my very first look at Felicia as a kid, and even I could tell this was bad news. And that’s it for The Cosmic Spider-Man. All in all, it’s a pretty fun stunt. Doing it during Acts of Vengeance so he’d have an excuse to wipe the floor with powerhouses way out of his league was very clever, and revealing it to be a gimmick rooted in Marvel tradition was cool. I mean, Captain Universe doesn’t “make sense,” but it’s also not out of the blue, either. Nicely done. But what happens next? What’s up with Flash and Felicia? What if, I don’t know, what if some of the people Spidey embarrassed come back for payback now that he’s back to normal? That would be a real bummer…