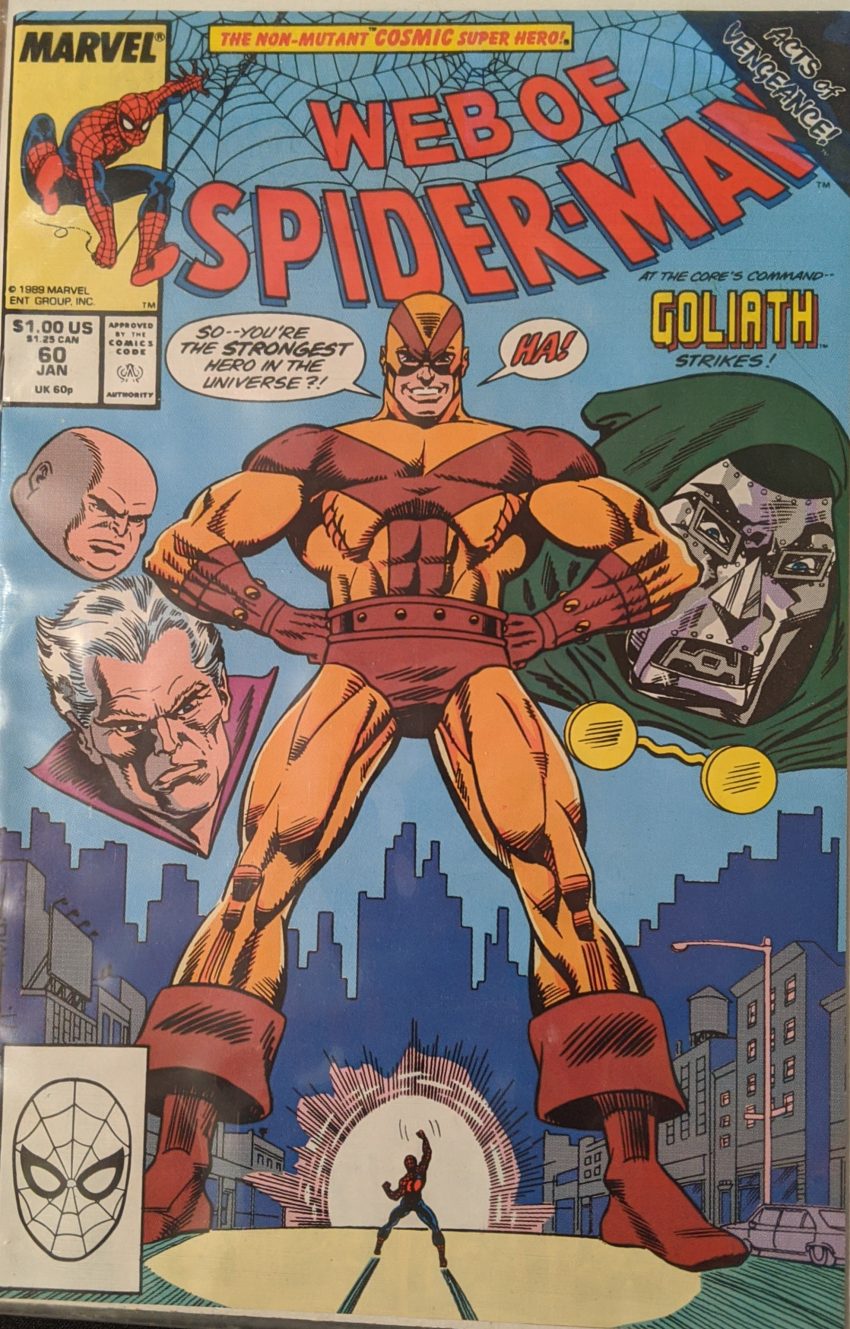 I guess the main villains were called The Core? I should look at more of Acts of Vengeance some day. I’ve basically only read the Spider-Man, Daredevil and Captain America issues with some random others sprinkled in. I also know nothing of this version of Goliath. Terrible costume. Hank Pym was called goliath for 10 seconds, and for a weird time Hawkeye took Pym Particles and became Goliath, and then there’s Bill Foster, first Black Goliath because racism and eventually just Goliath, and then his nephew Tom, the current Goliath. This guy, I don’t know. He’s already fighting Spider-Man on the first page!

Nick Katzenberg clearly not understanding The Bugle’s new Spider-Man mandate. Sometimes I remember the first  mention of Nick on this blog was him dying of cancer. I imagine someone who didn’t know the character thinking that was sad, and then getting to see him in subsequents and thinking… maybe less sad. Makes me chuckle, Anyway. Oh, hey, hang on! There’s a reason that boring color scheme is familiar!

He was The Smuggler! Goliath is certainly a better name. Spidey says if this guy isn’t the same Smuggler he used to be, well, he’s not facing the same Spider-Man as he easily lays him out and leaves. As he goes, Nick Katzenberg keys a guy’s car for being mad that Nick was parked in the middle of traffic. Swell guy. Goliath shrinks to normal size once unconscious, and a fake FBI agent who actually works for Kingpin shows up to take him off the cops’ hands. Spidey continues on to Aunt May’s house, his original destination, to ask her advice on dealing with his new powers (In a roundabout way, of course). He finds her & Nathan doing yard work.

That last panel is… kind of hilarious. I get it, but… really cranked the emotion to 11, there. Elsewhere, Goliath is brought before Kingpin, Magneto & Doom to answer for his failure. Doom thinks he might have an angle to beat Spider-Man, while still secretly hoping to take advantage of The Webslinger’s new moves. Then, back to Forest Hills.

Sweet, but what does May think just happened? Peter traipsed all the way out to her place to be like “yo, what if you were God? Yeah? Ok, thanks, bye!” At The Daily Bugle, Thomas Fireheart rejects Nick’s photos of Spider-Man, saying he’s a hero and will be portrayed as such. Kate Cushing, now Managing editor (Did Fireheart can Robbie???), says nothing. Fireheart is the head of a multinational company, and a hired assassin, and I guess sort of a superhero? How does he have time to sit in this newspaper office all day? Is the debt he feels he owes Spider-Man such that he’s put his entire life on hold for this? It doesn’t make a lot of sense. It makes less as he finds Spider-Man in his office, saying he’s read Fireheart’s editorials about how great he is, and wanting to know why he won’t sell The Bugle back to JJJ. So Fireheart is actually writing for the paper? Whatever! As they argue, Glory Grant bursts in, not having seen Spider-Man since she mistakenly shot her werewolf boyfriend trying to shoot our hero back in Spectacular 155, and she freaks out and flees. What would she think if she knew her boss was a werepuma? She has a weird life.

Spidey goes to the meeting later, where Kingpin reminds him and us that Spidey is sort of responsible for Hammerhead & The Chameleon taking over a lot of his turf in the last block from this era, and reveals, rather unsurprisingly, that this is a trap.

“Bigger than anyone’s ever been before!” he hilariously claims next page.  That doesn’t stop our guy from manifesting eye beams now (With that same particular energy signature) to zap him. But in response, he just grows, and is soon 200 feet tall. That’s a lot! Doom watches it all, proclaiming these events satisfactory. He apparently implanted a device in Goliath’s pituitary gland that is rerouting Spidey’s new power into Goliath, and also allowing Doom to study it, so he can eventually claim it for himself. Classic Doom. The Silver Surfer, The Beyonder. He sees someone with a lot of power and just goes “I’ll have that, thank you.” Back at the fight, Spidey realizes every blast is making Goliath bigger.

Hey now, what was that? I’ll tell you what it was, it was a surprisingly direct revelation of what’s going on with Spidey considering it won’t be fully explained ‘til next month. If you’re a big enough nerd, that was all you needed. Spidey zaps Goliath and saves the ferry, but Goliath passes out and causes a tidal wave, which our hero stops with his new magic webs.

Can Doom steal Spider-Man’s new powers? Just what are they, anyway? The answer is still surprisingly far away! This issue has another letter from my new favorite letter writer, “Bananas” Corvello! I wonder how often he got published.