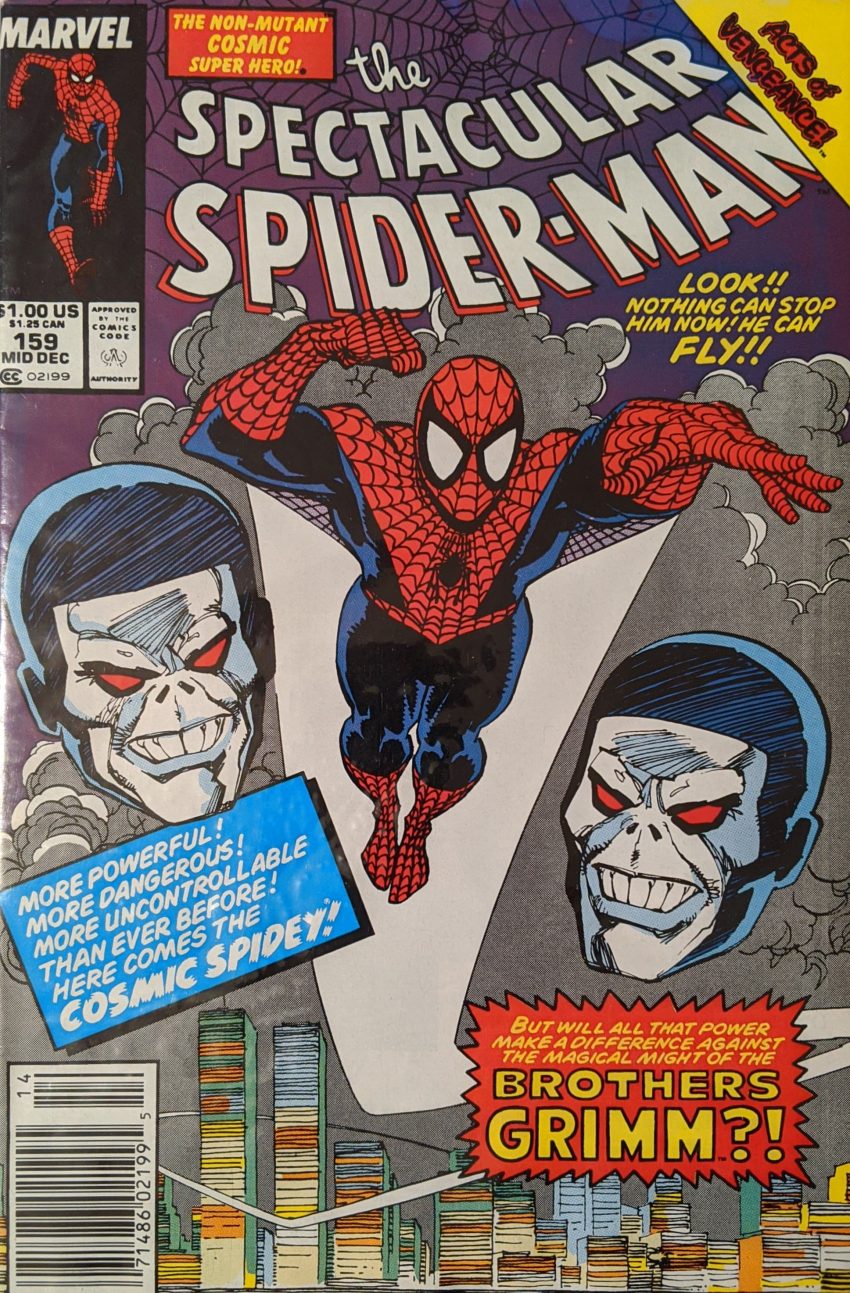 Not only did I not buy this one at the time, I’ve never even read it before. My reading of Web and Spectacular was spotty at first, but I tended to get Web more because I preferred its art. I wouldn’t find myself routinely buying all the Spider-Titles until the clone crap demanded it. Before and after that, I’d just get the ones that looked interesting. Once in a great while, I’d even pass on ASM, tho the first instance of that is several years in the future from this issue. Anyway, The Brothers Grimm! Dopey villains, but I don’t know much about them. Seem like more jobbers Spider-Man will mercilessly crush with his new powers, but let’s see. Mike Esposito hangs on to do finishes, still fully ignoring that Spidey’s costume is mostly black now. We start on Percy and Barton Grimes (The Brothers Grimm booooo) in prison Los Angeles when The Wizard shows up and rips the roof off the whole building.

I guess if these lames can give Iron Man a hard time, they should be a problem for Spider-Man. Well, normally. Speaking of, he’s hanging upside down, as is his way, thinking about/recapping his cosmic adventures, when he realizes he’s floating upside down way up in the sky. This, in turn, freaks him out so bad he goes falling to Earth and barely latches a web onto the side of a bridge.

Doom’s, of course. He reiterates to himself and us his interest in learning the extend og Spider-Man’s new powers and how to take advantage of them as The Wizard checks in to say The Brothers Grimm are go as Spidey’s next challengers. Turns out they were Doom’s idea, wanting to pit magic against The Webslinger’s new moves. Meanwhile, in Washington DC, Joe Robertson’s lawyer and Bruiser’s brother the White House advisor are on their way to ask the president himself to pardon Joe! Straight to the top! He talks about how he abandoned his brother when he found out he was a criminal.

Boy, this is a subplot. I do not recall the love affair of Cynthia Bernhammer and Nick Katzenberg from my youth at all, but it seems to be a Spectacular subplot, so I guess I could’ve easily missed it. Our man’s danger sense is inexplicably being set off by J. Jonah Jameson, on campus looking for Peter. JJJ’s decided that reviving Now Magazine is now a war with Thomas Fireheart, and he wants Peter to quit The Bugle and join the magazine. But Peter’s Spider Sense starts going crazy, and these days that means a splitting headache, so he wanders off, promising to call JJJ later. Soon, Spider-Man is swinging around, worrying that he can’t help reacting to a danger sense that now seems to warn him even when a moth flies by, when Madison Square Garden flies by. Spidey assumes it’s Graviton, but then spots The Wizard’s antigravity discs. Knowing The Trapster usually works with The Wizard, he suspects something is up, but there’s no time to worry about that right now as people are falling out of the famous venue.

I bet Iron Man is deeply embarrassed everytime he has to deal with these guys. Guess what, those eggs contain Spider-Man’s true archenemy, gas, and he barely gets those people to the ground. Then Los Bros detonate all The Wizard’s discs, dropping The Garden on Spider-Man. A unique problem.

Whatever’s meant to be happening, I don’t get it. The next page doesn’t help.

Did he catch it… telekinetically? Why all the webbing? What did he think he was doing? None of that made sense. Esposite keeps doing the webs on the top of his head upside down and it’s really bugging me. As The Brothers come after him again, Spidey finally clears his head, talking about how his powers have been controlling him, but now he’s controlling his powers as he webs the two z-listers and…

This comic seemed almost less interested in The Brothers Grimm than I was. Aside from providing Spidey someone to fight, they didn’t do much. Barely got a sense of their personality or their deal, how or why they have powers, anything. With them down for the count and Doom still plotting away, we close on Peter Parker, having come home to a message that MJ is working late, eating a TV dinner alone on the floor of his living room, worrying that his life is out of control. Well, buddy, it’s gonna stay that way for a while yet. This issue includes a letter from someone called “Bananas” Corvello. Nothing really noteworthy in it, I am just delighted by the name. Come back next time for still more cosmic craziness.