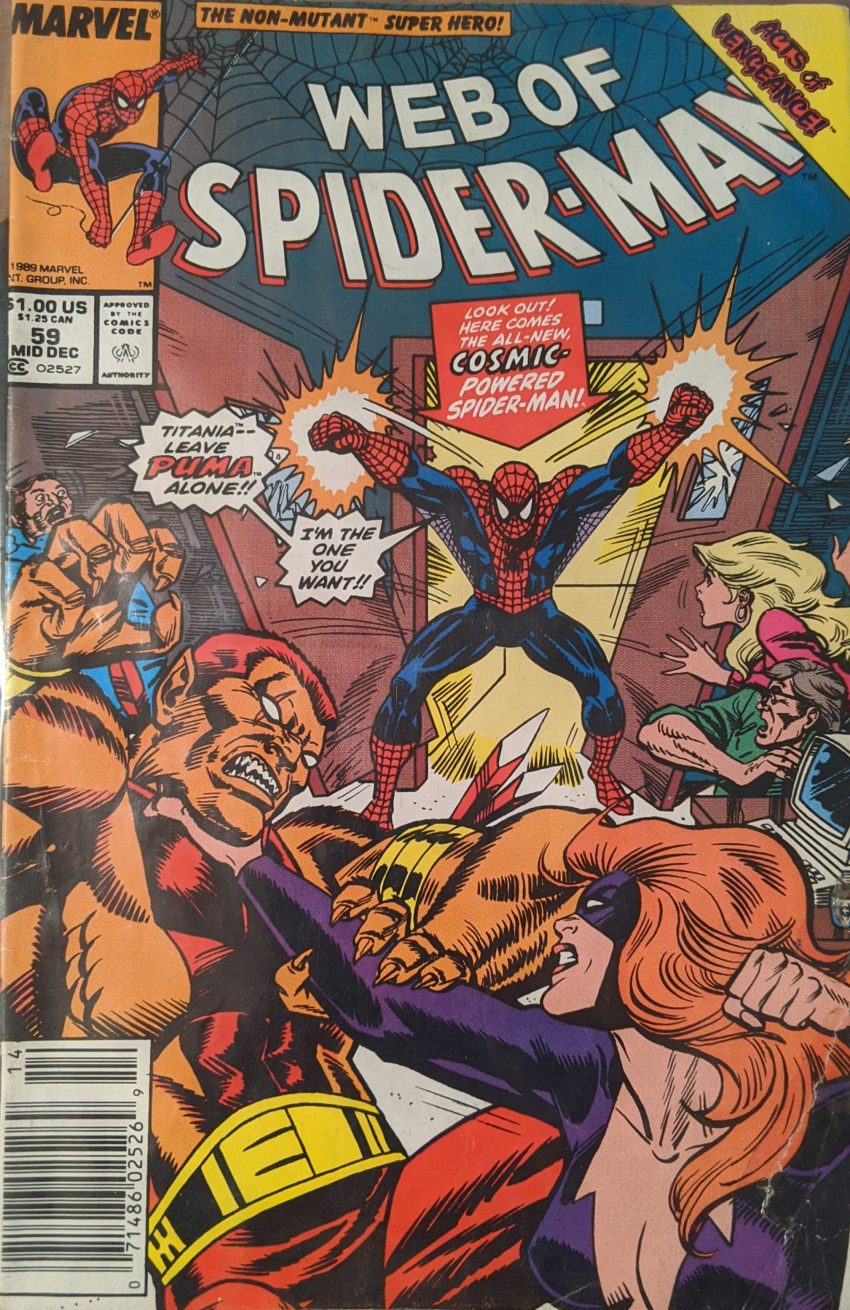 Yeah, this issue is cover dated “Mid Dec.” All the Spidey titles shipped twice this month. Did other Marvel titles? I’m not sure. Same team as last issue as we and Mary Jane find Peter sitting up on the roof of their building, saying he thinks he’s losing his mind. He recaps TAC 158 and then says he doesn’t dare use his new powers until he understands them. MJ suggests he come downstairs and talk, but he says he’s got a meeting with Thomas Fireheart in 10 minutes, and takes off as Spider-Man, even tho it looks like the middle of the night. Then we cut to Dr. Doom watching Titania work out. Doom created Titania by giving a regular woman tremendous strength in the original Secret Wars, and she’s been on several misadventures since, often in the company of longtime boyfriend and Hulk foe The Absorbing Man. She says if Doom will let her into his Acts of Vengeance thing, she can’t wait to go after She-Hulk, but Doom explains that’s the last person she’d be sent after since she’s lost to She-Hulk a few times.

Doom sends her raging on her way, a condition he created by planting a machine on her shoulder to alter her mood, knowing she won’t win her fight. After what happened to Trapster, Doom is as keen to find out what’s going on with Spider-Man as he is, so this is a test. Meanwhile, Thomas Fireheart presents his newspaper staff with their new mandate: positive Spider-Man coverage. He says JJJ’s bias has ruined this paper for too long, so we’re doing this. Kate Cushing points out that a pro-Spider-Man editorial bent is just as biased as an anti-Spider-Man editorial bent.

Titania smashes into the city room more or less exactly the way Spider-Man is on the cover, demanding to know where “he” is, so enraged people have to ask who she’s looking for. As a very confused Peter ducks out to give her what she wants, Thomas Fireheart makes the unusual choice to sneak attack Kate Cushing and knock her out so he can turn into The Puma. I guess that’s one way to do it.

Good job, Puma! Spider-Man catches an unconscious Puam in a web and drops him on a nearby roof. He worries that saving him will only make Fireheart more convinced he owes Spidey a debt, but he’s got bigger problems, as Titania reaches out the window and grabs him by the throat. Soon they’re both plunging toward the street.

Spidey once again thinks he should have died as he flies out of that hole, and again as Titania throws a big chunk of the street at him that hardly hurts. He’s really confused and freaked out as she presses the attack. But then Puma gets back in the game, and accidentally claws Doom’s control device off her shoulder, so…

He really botched that one. She leaps on him and begins pummeling his face, an attack that absolutely would’ve crushed his skull 2 days ago, but as Doom notes, it doesn’t seem like that’s how it’s going to go today. He also notes, however, that Spidey is refusing to use his newfound power, and wonders how long that can last.

Well now. That energy visual seems awfully specific, doesn’t it? But what does it mean? Spidey’s no closer to any answers. Maybe he’ll find some next post. So far, he’s only fought a couple of jobbers with his new powers, but that changes next time.