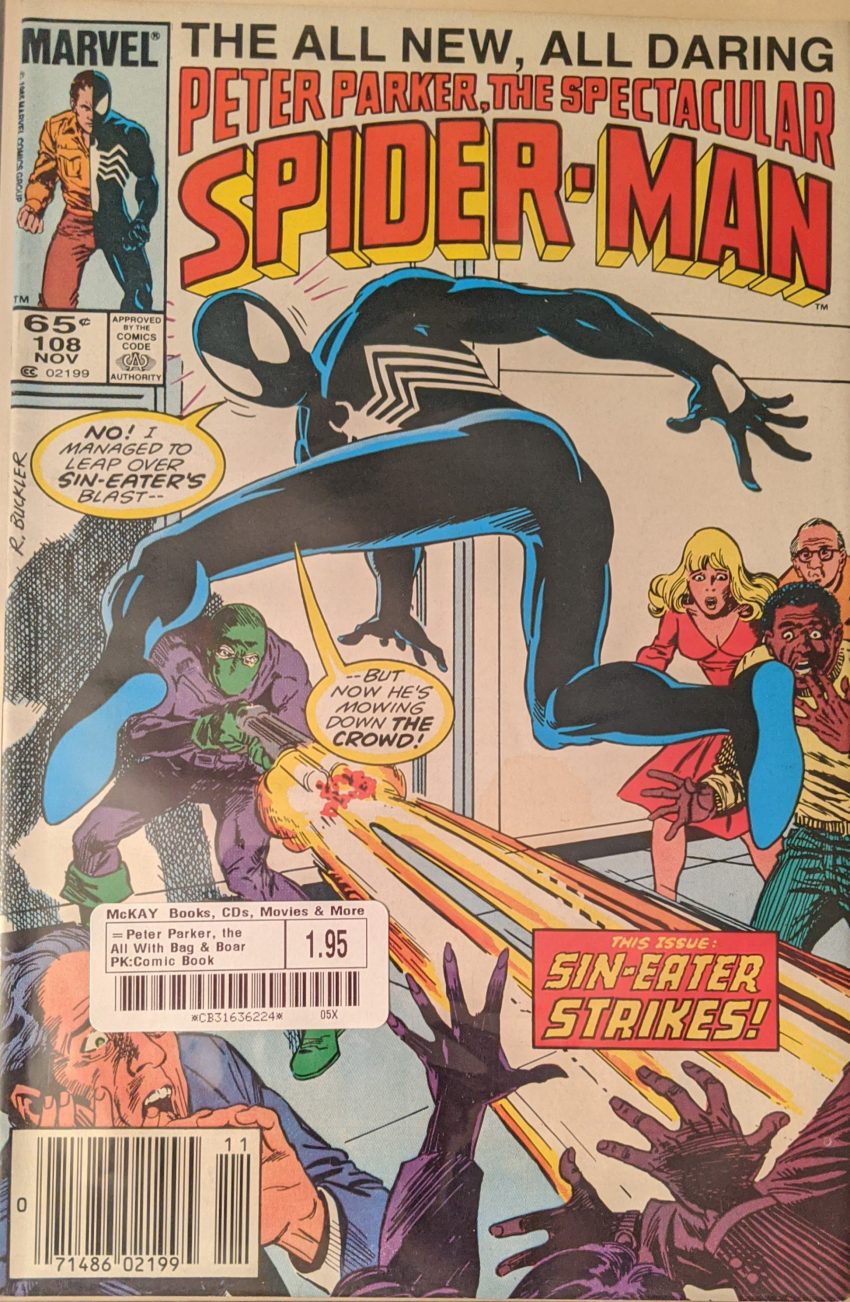 What… did you think would happen? This cover doesn’t bode well. Joe Rubenstein, Kyle Baker & Pat Redding all pitch in on inks alongside Brett Breeding this issue, and George Roussos swaps in on colors. This issue follows last issue’s basic format with a flashback and then a corpse. We see a law school interaction between Matt Murdock and Horace Rosenthal before jumping back to the present, with Rosenthal dead at the hands of The Sin-Eater.

Why are such unsympathetic people that close to the scene up there? Seems weird. Why is Charles Bronson in panel 5? Also weird.

Spider-Man is on the scene in seconds, but as the cover promised, he jumps over a shotgun blast only to let some poor guy on the street eat it. An enraged Spider-Man lays into Sin-Eater. The villain does unusually well in this exchange. Some text is spent trying to say Spidey’s “reflexes are dulled” by the shock of seeing those people shot, but come on. Guy can pick up a bus. I guess this would be over too quick if he didn’t struggle.

Spider-Man’s got the upper hand until he sees Aunt May laid out on the sidewalk. That gives S-E time to escape. Spider-Man can’t web him as he runs, thinking his webshooters must’ve been damaged in the fight. He tosses a tracer on Sin-Eater, but he sees it and throws it away. Sin-Eater is the luckiest villain in the world. Soon, Peter Parker races to Aunt May’s side. She’s fine, she just got knocked down. Ernie is pretty mad about Peter disappearing. Fair, given the circumstances.

The next day, Spider-Man swings into Stan Carter’s office just as he’s getting a ballistics report that matches the bullets that killed Jean DeWolffe and Judge Rosenthal. Spidey says he also saw her badge on the killer’s belt.

Carter can’t officially let Spider-Man in to look at Jean’s apartment, but unofficially sends him on his way. Meanwhile, the guy from last issue visits a church for confession again, saying he still here’s voices. Then it’s back to Spidey, thinking Stan Carter is a decent guy “for a cop” on his way to Jean’s apartment. When he gets there, he hopes his Spider Sense will uncover some clue, even though it’s never worked like that before. It does not.

We jump forward to Jean’s funeral. Her parents are there, as are Stan Carter and Peter Parker. In the same cemetery, Matt Murdock is present for Judge Rosenthal’s funeral when he notices Sin-Eater’s erratic heartbeat.

And we end on another murder. Sure points to the guy who went to that church twice as the killer. Of course, his identity was spoiled on this blog awhile ago when we covered Peter David’s sequel to this story first, because what a smart thing to do. But I’m not saying who it is ‘til later anyway.