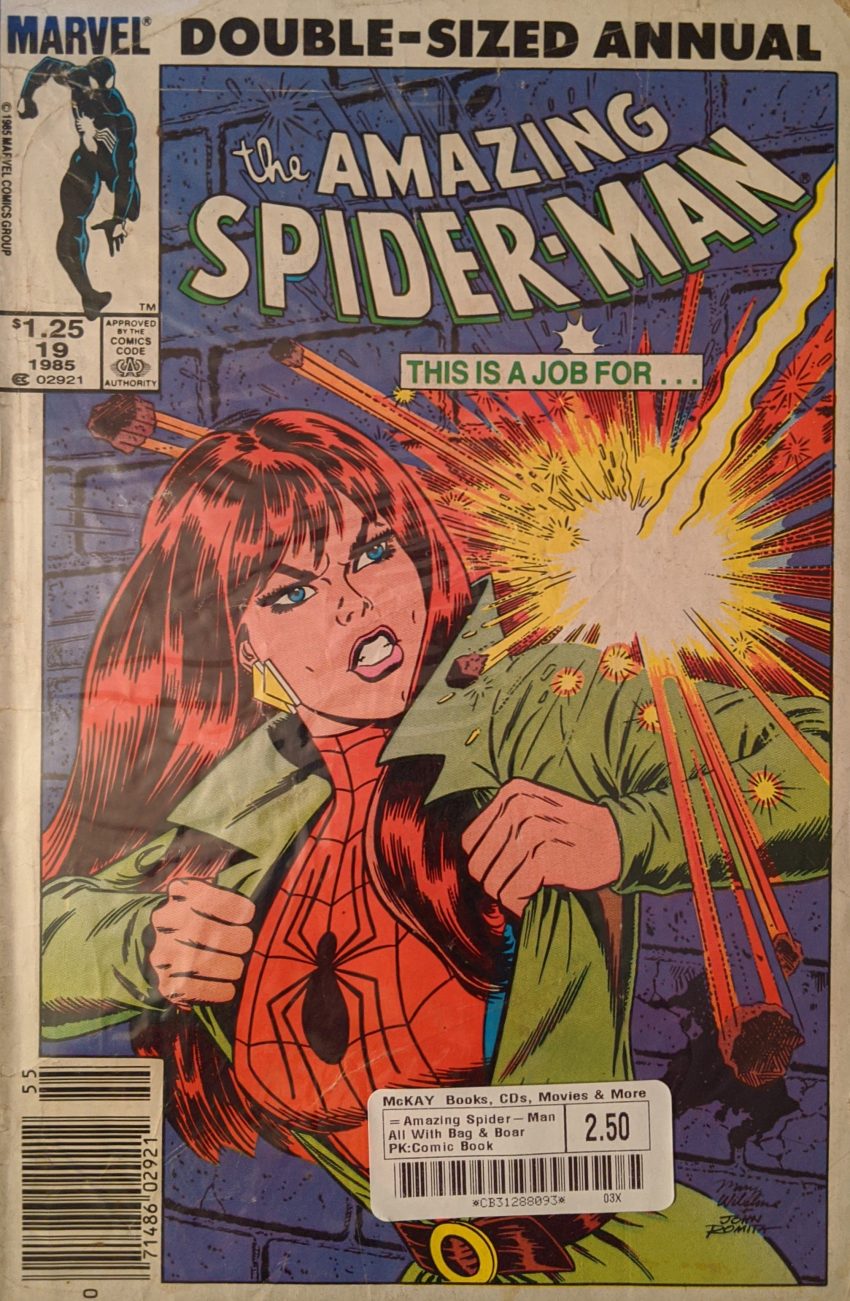 Now here’s an extra weird case. I got this one in elementary school. It was at some kind of… bookshow or something? It was like a book convention or something, in a coliseum. My Mom, the voracious reader, was into it, and it turned out they had comics vendors, too. And I saw this cover and it totally worked. I had to know why MJ was Supermanning into a Spider-Suit. Here’s the thing, tho: This is not that copy. At some point, I lost it. Got rid of it? I briefly had some friends who also read comics in elementary school, and we’d sometimes trade stuff. I think I traded this one away. So, in 2018, I had to get it back. Funny enough, my original copy was in much better shape, as I recall. But, what can ya do? Money talks, and I’d rather have a cheap copy than a pretty one. So, after all these years, reunited, and it’s feels so good! Louise Simonson may not have set down roots on Web as expected, but she’s not quite done with Spidey yet. She’s joined by a curiously female-heavy crew. Mary Wilshire does breakdowns, Pat Redding does finishes, but good ol’ Bob Sharen breaks the curve. Christie Scheele or Glynis Oliver couldn’t make it? Still, this many women on a book is unheard of for the period, and pretty neat. As things get rolling, Spider-Man foils a back alley drug deal, sending the participants scattering, some escaping in a car. He makes Monopoly jokes throughout.

Surprise! You only THOUGHT the hat plot was over! MJ is not actually too cool with Peter being late. In fact, she is working herself into a panic worrying that he’s been killed. She starts out telling herself she’s been too hard on him about the Spider-Man thing, but quickly becomes afraid for him by the time he arrives.

Tough times. You can understand her position, though. But, hey, let’s go meet the villain of this piece.

Alistaire Smythe, son of Spider Slayer creator Spencer Smythe, ladies & gentlemen. He berates Kingpin for the things Spider-Man has gotten away with in recent issues and the beginning of this one. Kingpin says the drug bust kept Spidey busy while something more important went down. Then he fires Smythe. Seems like the Kingpin I know woulda crushed his insolent head, but then the rest of this issue would be pretty boring. The next day, Peter Parker wakes from a nightmare about his villains and his dead loved ones… the usual. He tries to call MJ, but she doesn’t answer. He decides to go for a swing to clear his head. Meanwhile, Smythe is finishing his invention.

Here’s the thing about that:

Things could get pretty bad here. It IS a pretty sharp hat, tho!  Meanwhile, Spider-Man is swinging around on the verge of a meltdown, asking a random guy on the street if any girl would be lucky to have him when the Spider Slayer flying overhead sets of his danger sense. It’s way too far up and moving too fast for him to reach, tho, and soon Smythe is nearing the restaurant. Anna & May are joking-not-joking about Mary Jane & Peter getting married, and it’s Aunt Anna’s bad luck that she tries on Aunt May’s hat rrrrright as Smythe shows up.

Yikes! Spider-Man arrives at the restaurant, and as Aunt May recoils in horror at him, the hat sets off his Spider Sense. He quickly finds the tracker and pins all this on The Kingpin. Reasonable guess, but not gonna help.

So, Smythe thinks maybe MJ is Spider-Man! Meanwhile, the real Spider-Man assaults Kingpin’s tower assuming Mary Jane & Anna have been taken there. But there’s actually tied up in Smythe’s lab now. He’s deciding that Mary Jane could easily (?) be putting on an exoskeleton that makes her look like a man, and using suction cups to stick to stuff. Case closed, she’s Spider-Man. MJ say’s he’s crazy, but he’s made up his mind. And even though he’s sad that MJ is a beautiful woman, he still thinks “Spider-Man” has to die. But Spider-Man is still bulldozing his way through Kingpin’s tower. Kingpin gets briefed that Smythe kidnapped the famous model Mary Jane Watson and believes she’s Spider-Man. Kingpin actually loves this, thinking this will keep Spider-Man out of his business tonight. He says he’ll deal with Spider-Man.

Back in Soho, Smythe is showing MJ & Anna how all the gadgets on his Spider Slayer work.

Now we got ourselves a real fiasco. As Spider-Man races to Smythe’s place, he takes MJ out on a trip to see the exoskeleton. She’s keeping a really calm head under pressure, answering all Smythe’s questions about her crime fighting career with whatever she can thinking of (Aliens gave her the exosleketon!), and he buys it all. She asks him how he’s going to record his victory over her. Whether he’ll film it or just take pictures, and this shakes him. He says he doesn’t have a camera, and then MJ gaods him by saying she bets his daddy never got pictures of his victories over Spider-Man. Nerves of steel, that MJ. Back at the warehouse, Spidey arrives, triggering various heat seeking missiles.

MJ is really getting away with this.

Meanwhile, Smythe is still carrying MJ around when she spots Peter’s apartment. She uses a line about getting a photo of him in front of The Empire State Building to drop one of her boots through his skylight, hoping he’s home to be startled into action. Smythe is furious, and tells her his missiles have already killed her Aunt. MJ despairs internally, but keeps up her plan, saying the exoskeleton is at The Daily Bugle. Spider-Man is racing there, too, but can he make it?

He’s not credited, but there’s a few panels throughout this issue unmistakably inked by Romita, Sr., none more obvious than those last 2. It wasn’t uncommon for him to do corrections and edits during his time as art director, and he already inked the cover. Spidey tries and fails to stop Smythe repeatedly, learning the robot has a nonstick surface, tricking him into flying through a water tower. Smythe rants about how his dad left him & his mom because of his obsession with Spider-Man, adding another layer to this bloodfeud. Meanwhile, Spidey leasps down into a train station.

In spite of Smythe’s optimism, he gets stuck, electricity coursing through the ship. He’s still alive, tho. A sympathetic Amtrak security guard comes up and tells Spider-Man he’s a hero and they have this, allowing him to swing off to check on the ladies.

And that’s the ballgame! Smythe helping Peter see that he & MJ should never get back together is pretty funny considering Smythe is the villain in the story where they get engaged, as we’ve seen in ASM 290-292. So, you know, The Vulturions may not have been so hot, but this story really makes you wish Simonson’s tenure on Web hadn’t been cut short. Inventive, surprising, fun and suspenseful, all while adding layers to Pete & MJ’s relationship. Grade A stuff.