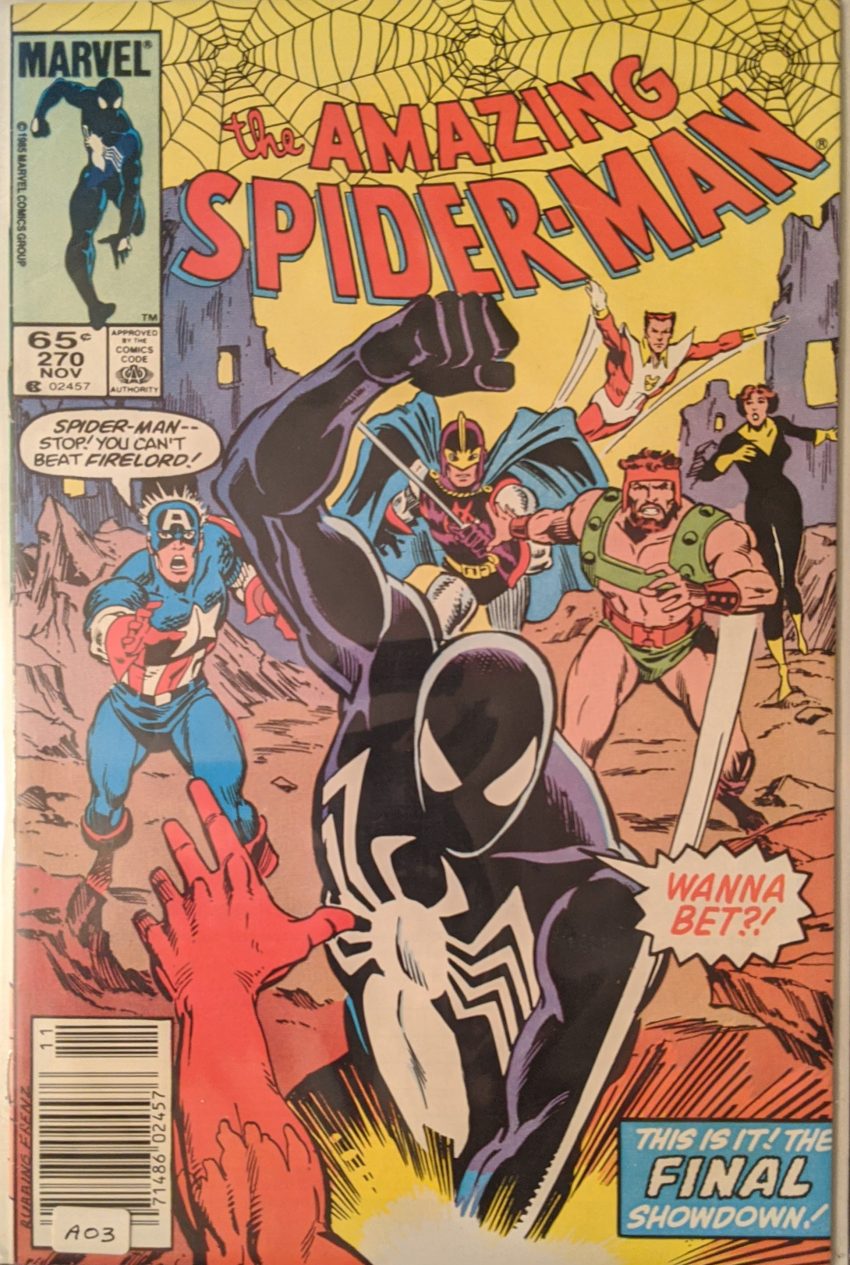 Back for more of this nonsense, with Bob McLeod tapping in to do finishes over Frenz’ breakdowns as Firelord bursts out of the water with his stick, ready for revenge. He recaps what he knows of last issue before locating his prey with remarkable ease.

“I don’t want to endanger people on the street, so I’ll lure him into a crowded office building!” Which he does, sending the flaming foe blasting over the heads of a big room full of people. So responsible. But they’re just getting started.

Awful. But we cut away to see JJJ rampaging through The Bugle, acting like Spider-Man having 2 costumes violates some kind of rule and thinking there’s more to it, which, even for JJJ, is quite a stretch, when Robbie introduces him to Kate Cushing for the first time.

Has JJJ met his match? I mean, sort of! Anyway, back at the dumb fight, Spider-Man smashes out of the office building with Firelord in hot pursuit (Eh? Eh??). Still trying to find an angle, he decides to… lead his foe into Grand Central Station, so they can endanger even more people.

“Accidentally hurt?” The phrase you’re looking for is “very much intentionally hurt,” dumb dumb. And I know New York was different in the 80s, but not so different as to have “deserted areas.” This is just absurd. Meanwhile, at Avengers Mansion, where the team is arguing politics with a dude from The National Security Council, they finally get word of Spider-Man & Firelord’s rampage. Speaking of, Firelord erupts out of the street and begins looking for Spider-Man. When the train he’s on emerges from a tunnel, Firelord sets the whole bridge around it on fire. Somehow, no one is hurt as Spider-Man swings away. He finds yet another building scheduled for demolition, this time with a crew on hand, and asks them to count to 1000 and then blow it before running inside.

“Spider-Man’s counting on us! Also, I don’t care if he dies!” Rather complex position. Or just terrible dialogue. You decide! They blow the building, Firelord survives, of course. Spidey throws a chuno of masonry at him and Firelord responds by demolishing the the building he’s stuck to yet again. Spidey thinks it’s lucky that building was deserted. Come ON, man. That’s nonsense! Spidey leads his foe to a gas station and tricks him into blowing it up. Will there be anything left of Manhattan by the end of the issue? It doesn’t work. Spider-Man realizes he’s trapped out in the open, and then we arrive at the biggest reason this story is derided…

“Some imagined sleight?” You kicked him in the face to start this!

The End! Spider-Man somehow beat a cosmic being unconscious. Insane. And in spite of all that devastation, guess what? No consequences! Spider-Man’s reputation doesn’t change, no one thinks anything of him basically trying to kill hundreds of New Yorkers today. You might compare this to “Nothing Can Stop The Juggernaut” to defend the carnage, but there’s no contest. Nowhere near as many people were endangered in that one. And that time, Spidey actually found a clever solution to his problem that didn’t involve almost killing hundreds or killing his enemy, whereas this issue, he seemed to be trying really hard to do both! Utterly Preposterous. Genuinely one of the worst Spider-Man stories of all time. Well, at least that’s over. Next post, things get a whole other flavor of weird.