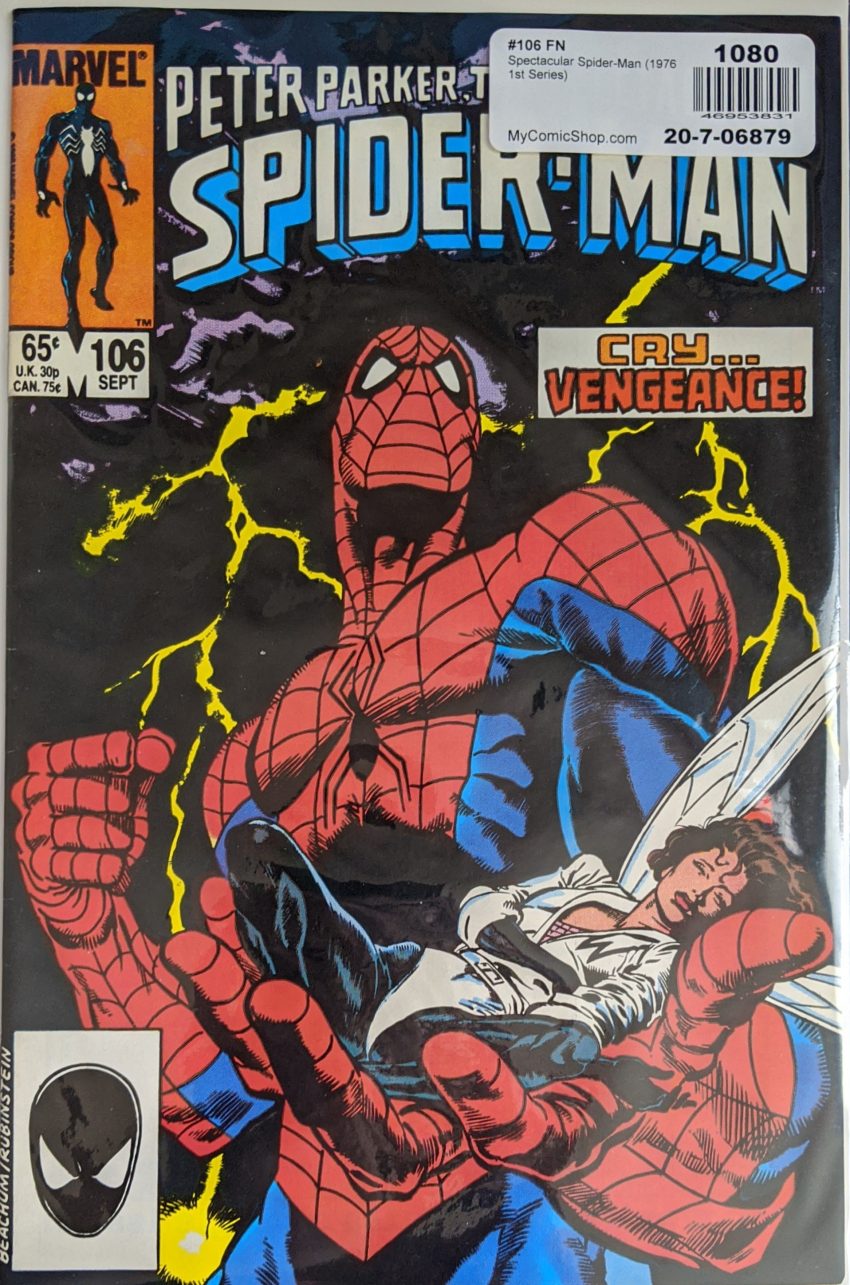 Weird face on Spidey there. Weird spider symbol, too. Same creative team as last issue for the first time in a while on this title. Spider-Man has gone to Avengers Mansion, where he is really bothering Jarivs and Starfox waiting for The Wasp to show up. He recaps last issue to Jarvis as Jan finally arrives, showing off her new hairdo and a new outfit she bought. Jan is a rich socialite in addition to a superhero and the leader of The Avengers at this time, she lives a different lifestyle.

Jan says the best thing they can do is catch Granetti importing drugs, and she has a lead. Meanwhile, we cut to Paladin quitting Granetti’s employ, still wearing that ridiculous cape. I don’t get why he was there in the first place. Then we jump ahead to the docks at night, as Grantetti’s drug shipment is being unloaded hidden in fruit crates when Spider-Man shows up.

Spidey dumps Paladin in the water and then takes out a goon who sneaks up on him. Meanwhile, some teens are watching the whole thing. Paladin smashes up through the dock and fights Spider-Man some more until they both hear a scream.

That plane contains more drugs boxes marked “Teddy Bears,” which doesn’t seem too convincing, but luckily, The Wasp is on hand to dole out some punishment, and also take some photos of the operation, Spidey-style. But when she runs off the goons, she finds the teddy bears just have sugar in them. So… it’s some kinda fake out? This seems like a weird plan. She says she hopes Spider-Man has better luck.

Things get weird here because the narration says the grapefruit was just grapefruit and not drugs. But the goons themselves made it pretty clear it wasn’t. Maybe even they didn’t know what they were transporting. I dunno. Anyway, Granetti himself is on a train carrying his real drugs, along with many of his goons. But when the train enters a tunnel, Jan is waiting at the other end in an Avengers Quinjet, and opens fire on the train.

“DEVIL take her lasers!” has to be one of the weirdest things ever said in this book. Wasp, of course, is not in there. She’s under the train, detaching the cargo cars from the engine, having flown down there tiny while everyone was distracted. Granetti has another engine on the back of the train tho, just in case, ready to go. And then Spider-Man and Paladin show up, Spidey furious that Wasp has seemingly been killed.

In his rage, Spider-Man grabs the last car thinking to try to stop it. Even he’s not that strong. But he’s strong enough that it pops right off the train thanks to Wasp’s cutting through the connection earlier. Then she appears to let everyone know she’s ok. So all that’s left is the villain of the piece.

Not the best characterization of Spider-Man, I must say. But I guess all’s well that ends well. Next issue, Rich Buckler plugs back into the art job for a famous Spider-Man story, one I’ve only previously read in trade. The name of the story is a big spoiler, and to my absolute shock, Priest gives it away in the letter column of this issue!  That one’s a 4-part story, though, and we’re a month ahead on Spectacular as of this issue, so it’ll be awhile before we see it. Next up: Secret Wars II.