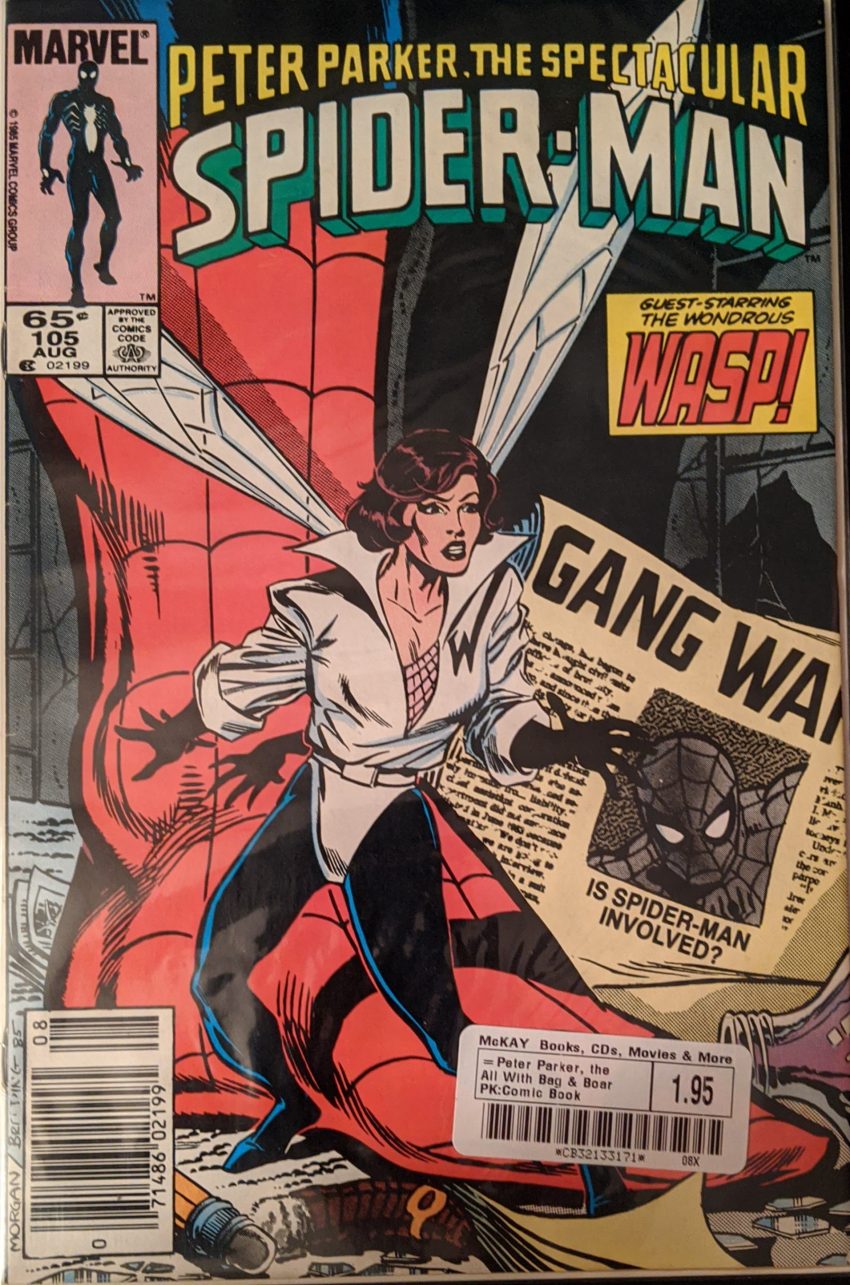 Never too long between gang wars around here. It’s a plot by Christopher Priest (Under the name Jim Owsley, like everything he did back then), script by Peter David, pencils by Luke McDonnell, inks by Brett Breeding, and colors by who else, Bob Sharen. It begins with an explosion in an apartment building. Spider-Man soon arrives on the scene to investigate, but finds its sole occupant didn’t survive. He takes some pictures, even though he feels awful, as well as certain Robbie won’t buy them. But Robbie says they took guts to take, and he wants all of them. He tells Peter a Robert Sanchez, Sr. lived there, a union boss with a lot of enemies.

That wasp/spider thing stretches back to their very first meeting. Jan says she knows Consolidated Importers is trying to buy Northeastern from her company, but it’s run by one Vince Granetti, a would-be kingpin. While she’s expositing for Spidey, Robert Sanchez, Jr. bursts into the meeting, saying they’ll all be sorry for the death of his father and vowing to keep the strike on.

There ya go, Jan. Spidey begins sneaking into the compound, but he’s talking to himself the whole time. No wonder he’s discovered immediately. He dodges some energy beams when he was expecting bullets, and webs his assailant, who turns out to be…

Did Paladin ever wear a cape before or after this? I only know him from appearances in Spider-Man comics. He was apparently created in Daredevil. They do 1 page of Two Heroes Fight before Granetti appears and calls Paladin off. Spider-Man does his best to intimidate the guy, but Granetti both threatens to have Paladin take out Jan and admits to killing Granetti, since Spider-Man is just a vigilante and can’t do anything with that info. Kingpin should try that bit more often. Soon, Janet is walking in Central Park when a zap clearly intended to miss her hits a tree.

Paladin’s awkward flip move fails him again as Jan shrinks, and even he calls out how it’s not working. In a baffling excuse to draw some cheesecake, Jan shrinks out of her clothes, but not what appears to be lingerie. Oooooh kay. At Wasp size, Jan can literally fly circles around Paladin, zapping him a few times along the way, all while flirting. That’s multitasking. She takes him down pretty easily, and then he announces business is concluded, so they can sit down for drinks. Jan mentions she’s not with Hank anymore.

The Wasp seems pretty unconcerned about the coming mayhem. Maybe she has a plan. Maybe those guys deserve trouble. They sure seemed like it. We’ll find out next time.