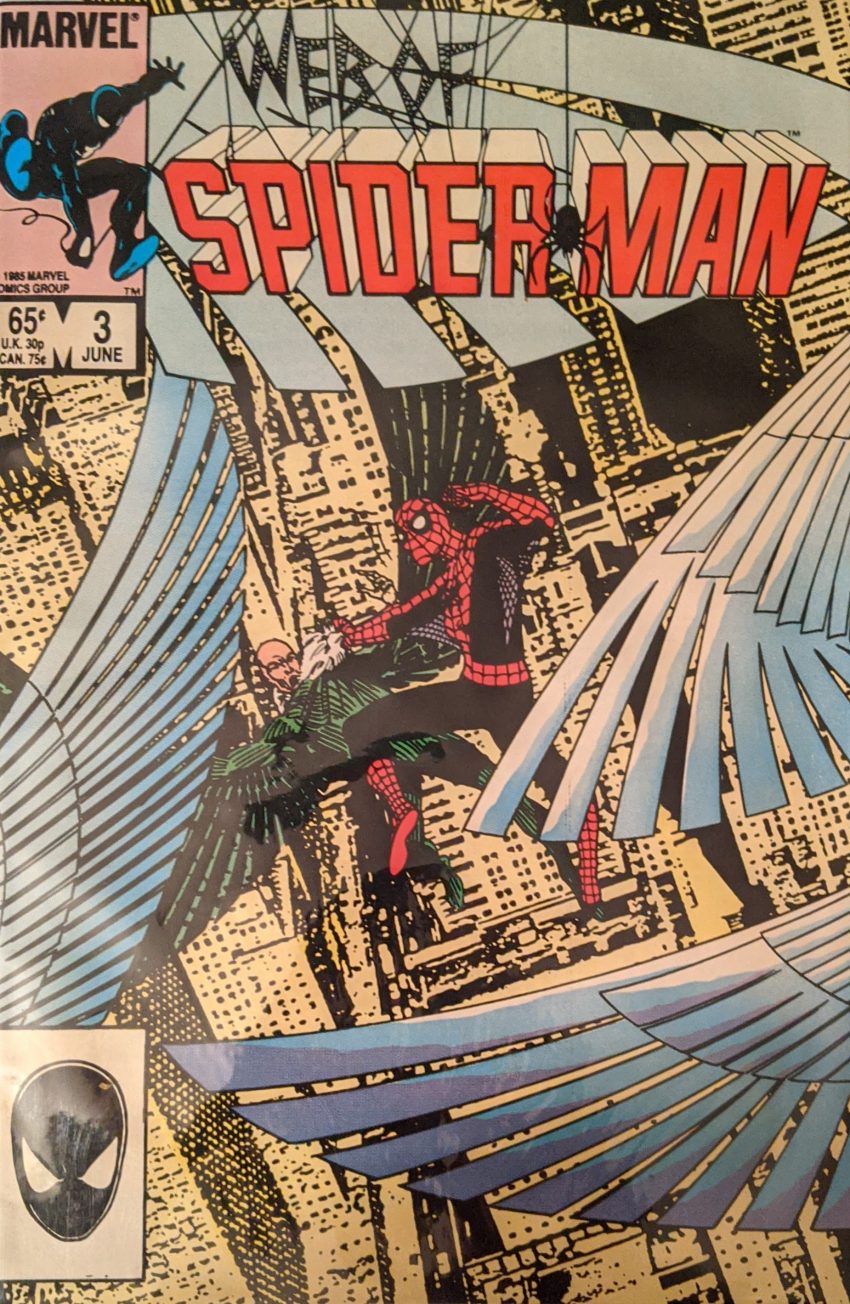 Figures the real Vulture was gonna get after these wannabes sooner or later. So now John Byrne is doing covers for 2 out of 3 monthly Spider-Man titles? Maybe they thought the “lesser” books needed a boost on the newsstands. It’s the usual gang at the helm (Tho not for long) as Adrian Toomes reads about The Vulturions in The Daily Bugle from prison. I guess he’s been in since ASM 241? He’s furious, of course. He rants to himself that the prison guards destroyed his wings, but they couldn’t destroy his knowledge, so he’s secretly rebuilt them using stolen parts, and now he’s bustin’ out. He plans to find out how The Vulturions learned his secrets and then kill them. Vulture has rebuilt his wingsuit from scraps before, but this time, it doesn’t look like it. He’s in full, normal costume and he zooms out of jail.

Vultch’s plan is to just fly over the train, using it to make sure no one follows him. Meanwhile, Spider-Man stops some purse snatchers as fast as possible on his way to The Bugle. He’s going to mail Aunt May the hat today, after he develops some pictures. Yes, the soul-shattering saga of the hat may be reaching its conclusion! Also meanwhile, The Vulturions rob a place while telling each other their backstories, but little do they know they’re observed by their inspiration, as he studies them in preparation to kill them.

MJ hears over her radio that The Vulture has broken out of jail, so the hat is in danger of going undelivered! The Vulturions return to their hideout, wondering if The Vulture has heard of them yet. Honcho bets he’s really mad, and then he dives at them to show how mad he is. Vulch chumps most of them out instantly, ramming them into a wall, before dragging the last one out to interrogate, saying he’ll tell Vulture how they stole his gimmick or he’ll drop the guy. Elsewhere, Peter & MJ are on their lunch date, discussing Peter’s rift with Aunt May. MJ thinks Aunt May would understand Peter dropping out of school if she knew he did it to help people as Spider-Man, but he says she’s be furious.

Poor MJ is trying, but seeing the harsh realities of this side of Peter’s world is always too much for her in this period. Not an unreasonable reaction. May & Nathan hear The Vulture is loose, and recall how they met him back in the Stern days as Nathan shoots cake frosting all over himself in a funny little domestic moment. Then it’s back to the battle. Vulture flies away,  convincing the wannabes to chase him, and starts weaving through Manhattan with more speed and skill than they have, causing Sugar Face to smash into a billboard. Now there’s only 2 of them left. Spidey better hurry or he’s gonna miss the fight.

Spidey webs Honcho out of Vulture’s grasp, then webs onto Vulture for the usual flying battle thing they tend to do, Vulture zipping around, Spider-Man just hanging on. Vulture switches things up a bit by flying our man right into a power line, which snaps, zapping him for a second. As Honcho and Gripes regroup, Spidey gets his feet on a wall and sticks, which should swing The Vulture into a roof and take him out, but his suit rips and Spidey’s web comes loose, so it’s not over yet. He manages to web Vulture’s wing to his side, so he can’t steer anymore, but then he gets hit with poison darts by the wannabe bros while he’s being dragged on a web and can’t dodge away.

The saga of the hat is over! And with that, this team is unceremoniously done with Web. Kinda bizarre that Marvel made it sound like this book was launched for them, and yet they only stuck around for 3 issues. I’ll admit, The Vulturions didn’t set the world on fire, but Lousie & Greg made a great time, and they did some great stuff at the end of MTU together.I bet they could’ve had a great run on this title. Ah, well. This time next year, Louise will be creating Apocalypse in X-Factor, making a huge mark on superhero comics, and Greg’s got a couple more issues with us before heading over to DC for long stints on some of their big titles. Just a shame they didn’t get to do this a while longer.