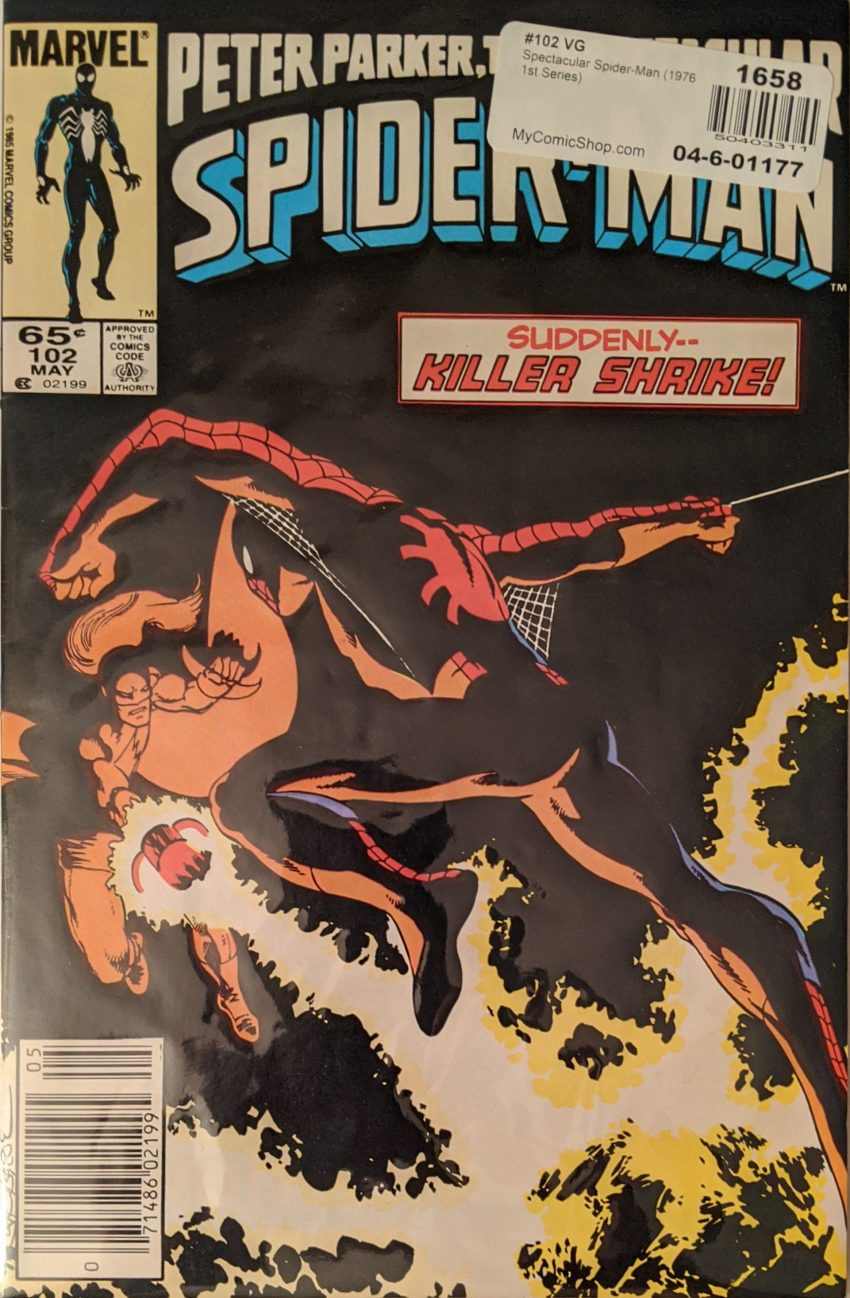 I’ve been getting Killer Shrike and Blacklash mixed up since I was a kid, and here they are, appearing in consecutive issues of Spectacular. How random. This is another one written by Cary Burkett, with art by Larry Lieber, Jim Mooney & J. Ferriter. Larry Lieber still kickin’ into the 80s. Killer Shrike kicks the issue off by robbing a bank. But not before brutally beating up the guards inside.

The super-criminal move of “maybe someone with money will notice me if I do crazy stuff” sure is common. At least KS isn’t specifically trying to impress Kingpin as we tend to see people do around here. And how are those 2 gonna fit into all this? No idea, the next page moves to New Jersey, where Peter Parker is saying goodbye to Harry, Liz & their new child after spending a weekend with them. On the bus, he strikes up a conversation with a young lady reading The Bugle, and casually slides in there that he took the picture on the cover.

This is a weird issue. It doesn’t take long for Spider-Man to catch up to the hit & run driver, who just starts swerving to try to throw him off the roof. So Spidey rips the roof off, and discovers the guy inside is almost blackout drunk. Disgusted, he just webs the guy up and calls the cops. Then he catches up to the ambulance with Donna in it, thinking all her family is way over in Jersey and he’s maybe the only person around who even knows her name. Life comes at ya fast.

As Peter dashes out, the doctor thinks he must not have wanted to get involved. Soon, Spider-Man is swinging toward Donna’s address. Meanwhile, that guy whose girlfriend left him earlier turns out to be, you guessed it, Donna’s brother, and Killer Shrike is his neighbor. So we’re getting there. We meet Donnie’s roommate, who lets us know Donnie lost his job recently and owes last month’s rent and this month’s utilities. He’s nice, but he can only support both of them for so long. He leaves, and Donnie settles in to be depressed.

Is that supposed to be Michael Jackson on the wall there? Rather creepy. Spidey tries to call Donnie, who is pushed over the edge by the ringing of the phone and decides to go kill himself! Donnie, no! Getting no answer, Spider-Man decides to just head over there. We cut to the hospital just to add that Donna’s fading and needs help, then to The Bronx, where Killer Shrike sees Spider-Man swinging up outside and assumes he somehow found him. So as our man tries to find Donna’s brother, a detour emerges.

That’s some bad luck. As Spider-Man & Killer Shrike battle basically right outside, Donnie composes a suicide note. Don’t do it, Donnie! Spider-Man runs out of web fluid after swinging all the way out to The Bronx, and that lets Killer Shrike knock him to the street below, where he slams into the roof of a truck. Meanwhile, Donnie’s climbing out the window. Spidey plays dead, luring KS in close to knock him out with one punch. Then he runs off to find Donnie.

So ends another surprisingly good fill-in issue. A lot going on, but it all came together in the end. I appreciate when the one-offs are strong like this.