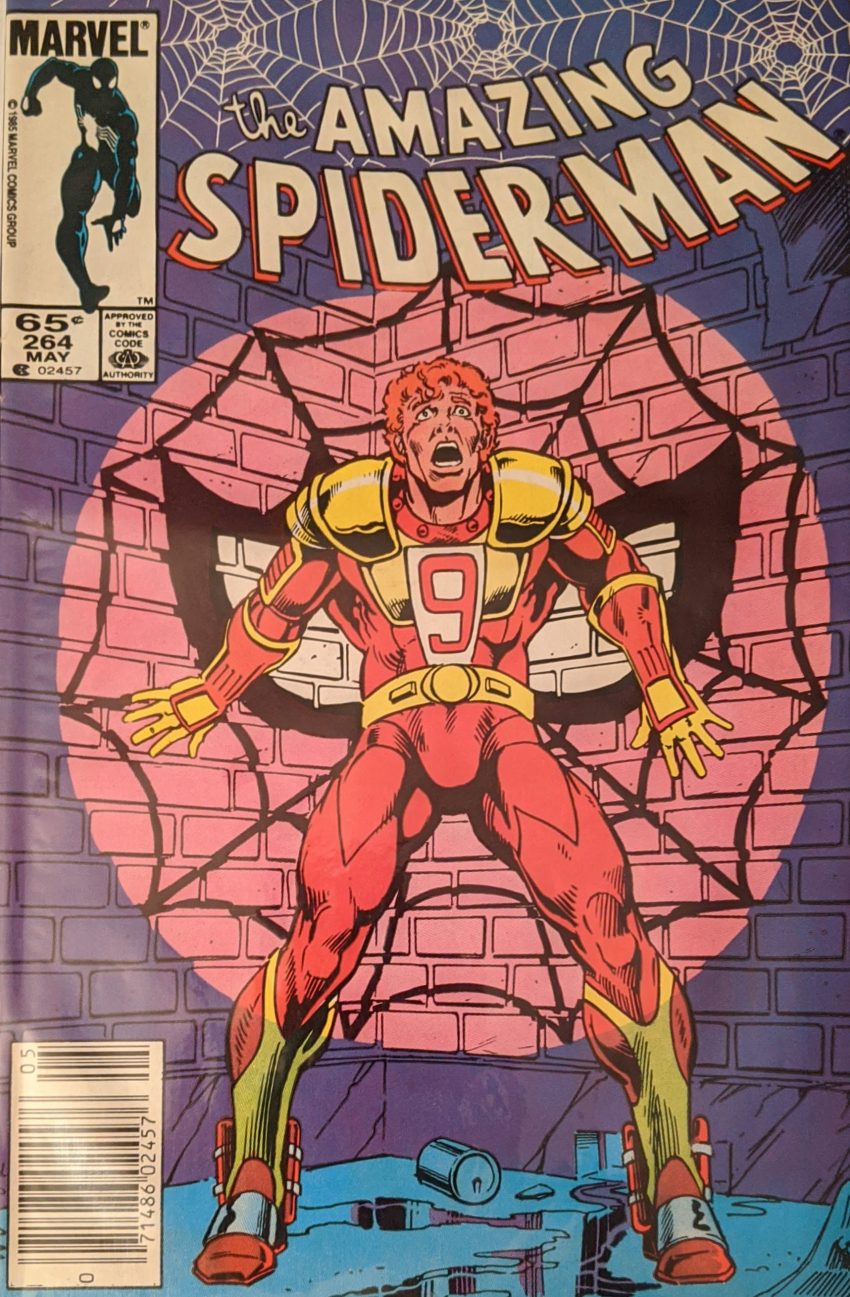 We got us a fill-in. Last issue promised the debut of Silver Sable, but that’s actually next month. I have read that Tom DeFalco was notoriously late with scripts in this period. Thus, this. It’s by Craig Anderson, Paty Cockrum & Bob Sharen. I don’t know who Craig Anderson is. Paty Cockrum is the wife of X-Men legend Dave Cockrum, and prior to reading this issue, I had no idea she drew comics, too. Turns out she only drew a handful of comics, but she worked in production at Marvel for a long time. She put together all the art for the Marvel Value Stamps, among other things. But strangely, they didn’t print her last name in the credits? I only found out it was her looking it up online. Wonder what that’s about. Who is this goofball on the cover? It’s not Flash Thompson, though you could certainly be forgiven for thinking so. No, this comic is way wackier than that.

Not wasting any time! This crazy kid, who calls himself Red 9, is just here to try to beat up Spider-Man for fun. Spider-Man dodges around him for awhile, trying to figure out what’s going on, as Red explains he’s from Baytown, Texas, and he came to New York to fight Spider-Man, and he’s been scuttling around rooftops for 2 days and nights trying to find him.. Hey, why not?

Paty Cockrum is a natural Spidey artist. She’s actually kind of ahead of her time, routinely twisting our guy into crazy positions approaching 1990s treatments. Spidey rides Red through a window, because the kid can’t steer himself. The kid passes out and then Spider-Man is yelled at by the occupant of the room he’s just invaded.

Wacky. But wait, it gets wackier.

Spidey hears all this, of course, and tells this doctor he can’t just throw an old man out on the street, but the doc says that’s just what he’s gonna do, and Magee can’t even keep the wheelchair. Sheesh. So Spider-Man decides to intervene, and declares that, “by 5’olock today, Pops Magee will be alive again!” So, he swings off to see what he can do about it.

That lady tells Peter that he has to go see “that blowhard, Blogett” in Medicare, who turns out to be a genuinely awful guy unwilling to help. But all the girls in his office are not so mean. One looks up Magee and proves there’s been a clerical mixup. And when Blogett says the only judge who can get Peter a court order to pronounce Magee alive is off on Wednesdays, the other girl says that’s her uncle and tells Pete where he is today. So soon, Spider-Man’s trying to get to a golf course on Staten Island, but the ferry is already leaving without him.

Sooooo this couple drops Spider-Man off, and he glides down to turn into Peter on the golf  course. After some comedy business with a groundskeeper, he finds the judge.

Spidey’s soon swinging back to the hospital with plenty of time to spare, thinking he should go look for Red after, but Red finds him first and wants to fight some more.

Improbably, Red says his uncle Steve made his suit “for NASA or something,” and when he turned 16, his friends paid for him to come to New york to fight his favorite superhero. Even more improbably, he manages to zap Spidey’s web bag, and the court order to save Pops (Along with all Peter’s clothes) go flying down to the street below, and the court order lands in the flames of a hotdog stand’s grill, burning them up. Enraged, Spider-Man comes after Red, telling him a man’s life is at stake. Red suddenly notices this isn’t a game and gets upset.

So, later, Spider-Man is back to the hospital, with new paperwork, but even though he made the trip in record time, he’s 15 minutes late. When he finds an empty wheelchair in Pops’ room, he despairs, and breaks the wheelchair in his frustration. But then Pops rolls in.

I found this goofy issue delightful. All fill-ins are going to be pretty insubstantial. It’s almost necessary. They’re usually done on short notice in a rush. But instead of just some forgettable fight with whatever minor villain was available, this one gave us a pretty bizarre and memorable story. It’s a nice change of pace.