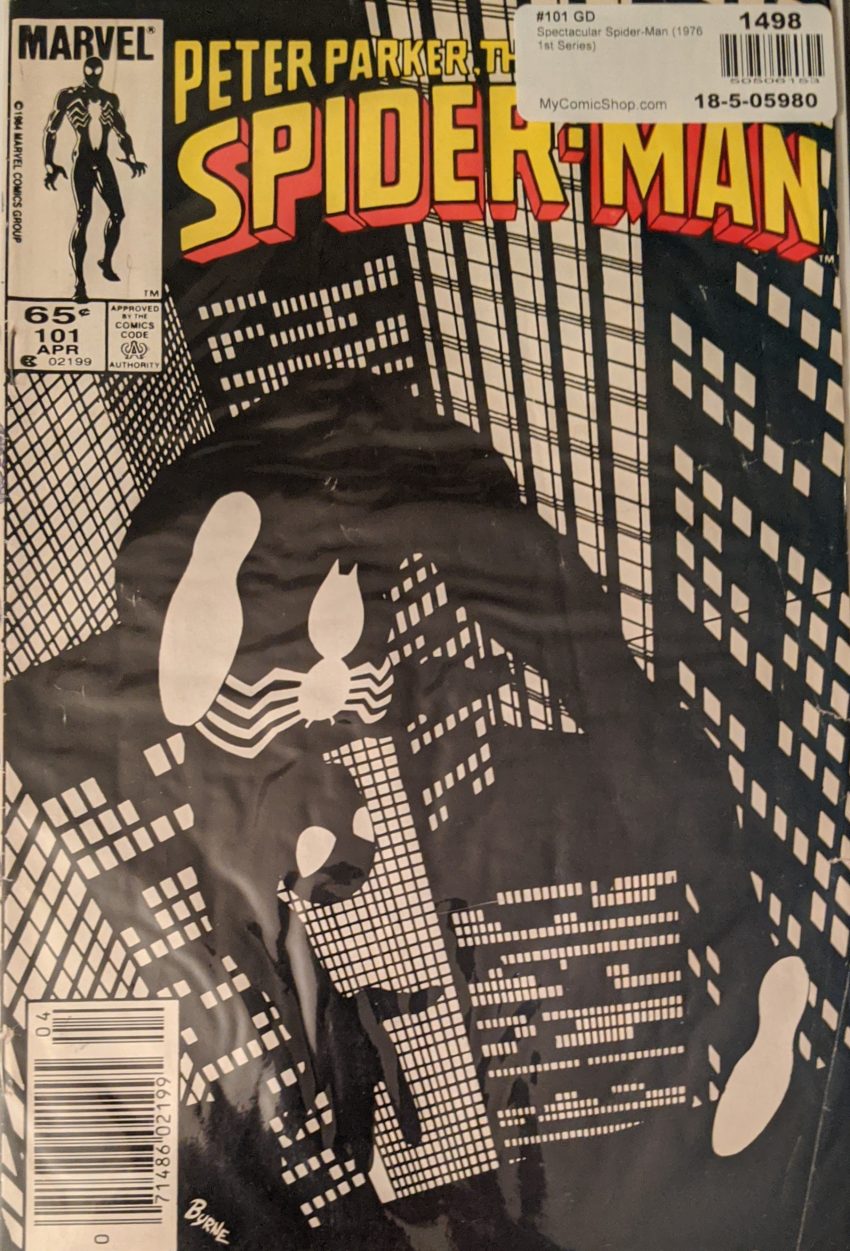 Now here’s an iconic cover by John Byrne. I made a cut vinyl sticker of this that covered the whole lid of my first laptop. As we wait for TAC’s next regular creative team to form, it’s a random one this month, with a script by Cary Burkett, pencils by Juan Alacantara, inks by Jack Abel & colors by always-reliable Bob Sharen. Spider-Man is in Central Park, where he sees a bluegrass concert is happening and decides it might cheer him up. What?

He’s going AS SPIDER-MAN? Aaaaaaalright. He makes a web hammock up among the lights and settles in to listen to some bluegrass, I guess. But he keeps seeing couples in love, and it makes his bad mood come back. Because he just broke up with Felicia last issue, right? Of course not. How could you have been so naive?

Yes, it’s never too late to pine over Gwen. And posed like a pin-up, no less. I realize it’s not been as long in-universe as in real life, but it’s been like 15 years, man. You should be getting past this to some degree! You’ve dated 2 other women (3 if you count the mysterious Cissy Ironwood, which I’m not sure I do!), proposed to one, almost broke up a marriage and ruined Deb Whitman’s life since then. Get a grip. Spidey helps that guy with his van, but then realizes he’s subconsciously traveled to the bridge where Gwen died (You decide which one!). He relives her death and gets even sadder. Good times.

Making his 3rd (and tiniest) appearance on the blog, it’s Blacklash! He’s apparently been sent to steal something by Cross Technological, the firm of the guy who would eventually be the villain of the first Ant-Man movie, but they did not tell him to expect a veritable army of security guards. He gets in over his head pretty quickly. He grabs a young lady as a hostage and takes off, cornering himself in an abandoned building as the cops show up. At The Daily Bugle, word of the hostage situation reaches Robbie, who sends Peter to cover it. He tries to just take pictures and let the cops handle it until he sees it’s Blacklash and not just some random dude.

Who is “he?” Blacklash hears that Spider-Man is outside and forces him to show himself. Then reporters swarm him, but he hears that this lady is the wife of one of the security guards, so that’s who was trying to sneak in.

Is… is Gwen’s ghost slapping him or something? And look at him Looney Tune-ing his way out of there, good grief. He sneaks into the building via the sewer, and runs into the guard, who he webs up to keep him quiet. He also says it’ll spare him the pain of seeing his lady die if Spider-Man fails, the very pain Spider-Man feels about blah blah blah. So melodramatic. Spidey gets the drop on Blacklash, webbing his hand to a wall and freeing the lady. Sort of.

Blacklash having such an easy time with even an injured Spider-Man strains credibility. As Blacklash advances on our hero with his spinning whip, Spidey webs his feet to the floor, and he lurches forward and almost whips his own legs off. Spidey tells the woman to flee, but then Blacklash shoots most of his whip at Spider-Man like a projectile somehow? And he dodges, but then it explodes on contact with the wall behind him? What sense does that make?

I don’t think you should beat yourself up for not anticipating the stupidest possible outcome, Spidey.

Super cool of them not to give this poor woman a shred of dialogue when it was her life in danger, real nice. Kinda funny such a famous cover is on such a forgettable story. He wasn’t even in the black suit! No care was taken to explain how Blacklash got from MTU 145 to here, either. Ah, well. That’s over with. Near as I can tell, this is Juan Alacantra’s only Marvel comics credit, but don’t worry, he seems to have gone on to a lucrative career drawing plus size fetish art. Hey, look, someone’s stamped bears all over the back cover upside down…