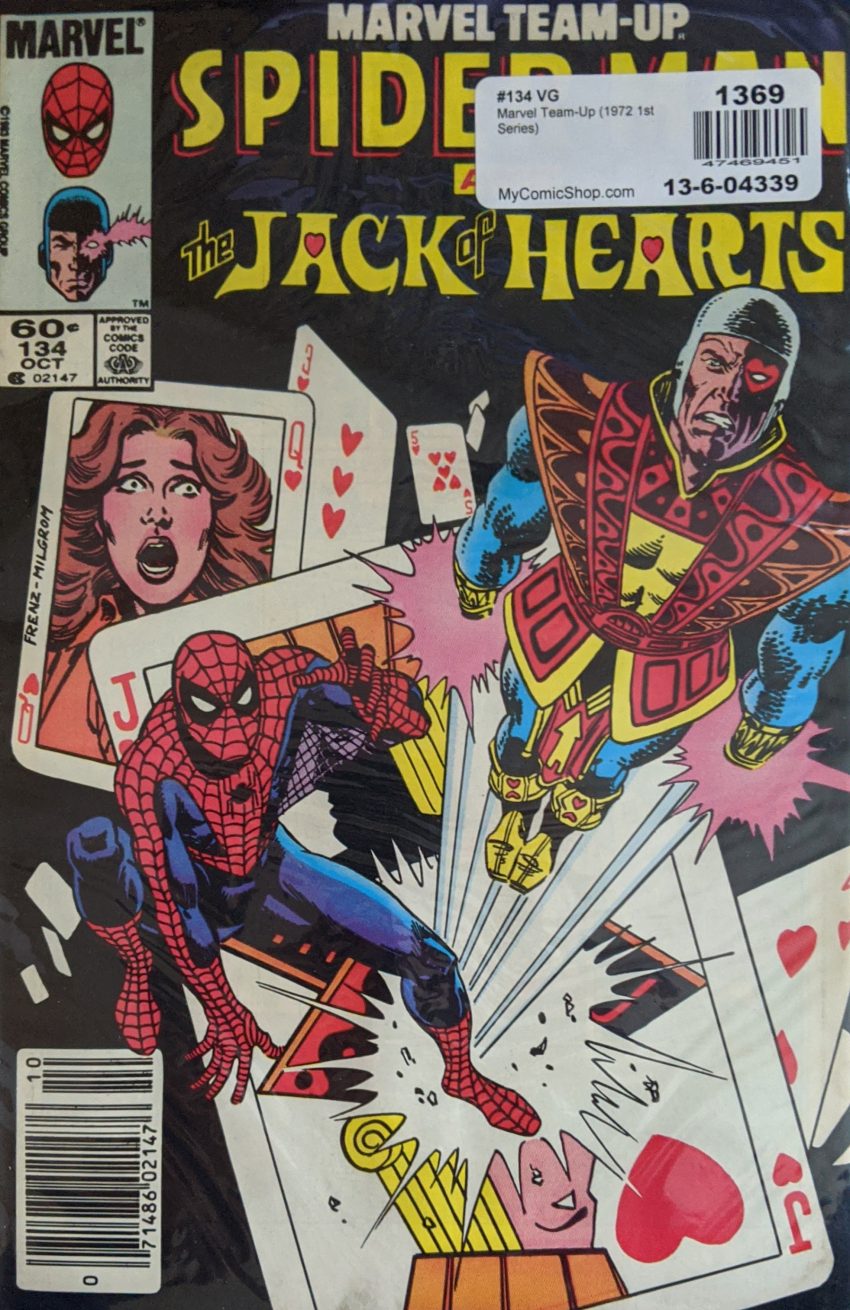 Hoooooboy, this is gonna be a weird one. It’s Bill Mantlo, Ron Frenz, Mike Esposito & George Roussos bringing Spider-Man together with one of the goofiest heroes in the Marvel U. And what does that have to do with Marcy Kane there on the cover? We shall see. Jack of Hearts. An utterly ridiculous creation of Bill Mantlo’s in the 70s, when you could do pretty much anything, no matter how nonsensical. His dad was a famous scientist working on “Zero Fluid,” a chemical that could revolutionize the fuel industry. When Jack was a teen, The Corporation, one of Marvel’s many evil companies, came for the Zero Fluid. Jack’s dad was killed, Jack was exposed to the chemical, he got super powers, and also wound up looking like an idiot. Jack Hart took the superhero name Jack of Hearts “because he did loved playing cards” and not at all because it’s literally his name, and swore vengeance on The Corporation. Eventually, his powers got out of control, and he turned himself over to SHIELD. As this issue opens, he’s been trapped in his family’s mansion for a long time, constantly monitored and kept under control by “neutro-mists,” whatever that means. But he hatches a daring escape and eventually drives away in one of the family cars. Anyway, here’s Peter Parker.

I feel like Peter has left ESU forever at least 3 times now. Like… get on with it. But wait!

Mm hm. Peter doesn’t want to get involved, but then he sees armed flying machines heading for the campus and knows he has no choice. Meanwhile, Jack flashes back to how he knew Marcy Kane in college, when she was a physics undergrad and he was a poetry major. They had a thing, but then he was called home to help his dad with Zero Fluid, and that didn’t work out too well. Now, knowing his powers are unstable, he’s randomly decided to try to rekindle that old flame.

SHIELD, of course. What did he think would happen? He’s a fugitive and he escaped in a regular car, how could they not catch him??? They get ready to get into it with poor Marcy standing there horrified when Spider-Man shows up.

Jack continues narrating about what a cool and powerful character he is so you can know that while Spider-Man chases them outside and decides to keep helping Jack. He goes on a merry chase for awhile before causing one of the SHIELd agents to crash through a wall, giving him a chance to finally notice who he’s dealing with.

This guy seems real cool! So nice and considerate of others. He comes after Spidey, who escapes into the science building and whips a trap, catching Jack in a big explosion. I guess if he’s done with the science department, he doesn’t think anyone else should get to use it, either.

In that Jack of Hearts miniseries, also by Mantlo, Marcy Kane would reveal she is secretly an alien, and that Jack’s Mom was also secretly an alien, and convince him to go to her home planet to try to revive its dying sun. Seriously. It’s the most random possible thing you could do. Jack of Hearts would wander around the cosmic end of the Marvel Universe for awhile before eventually joining the Avengers, and later on, be forced to blow several of them up. He’s great. Not really.

These last few issues of MTU, Mike Esposito has been rendering the blue in Spider-Man’s suit almost totally black, as would become the style later in the decade, regardless of who the penciler is. I wonder why. We may never know, but we’re leaving 1983 here for awhile to jump ahead to the immediate post-alien costume era of 1985 again. And we’ll start in a pretty unexpected place.