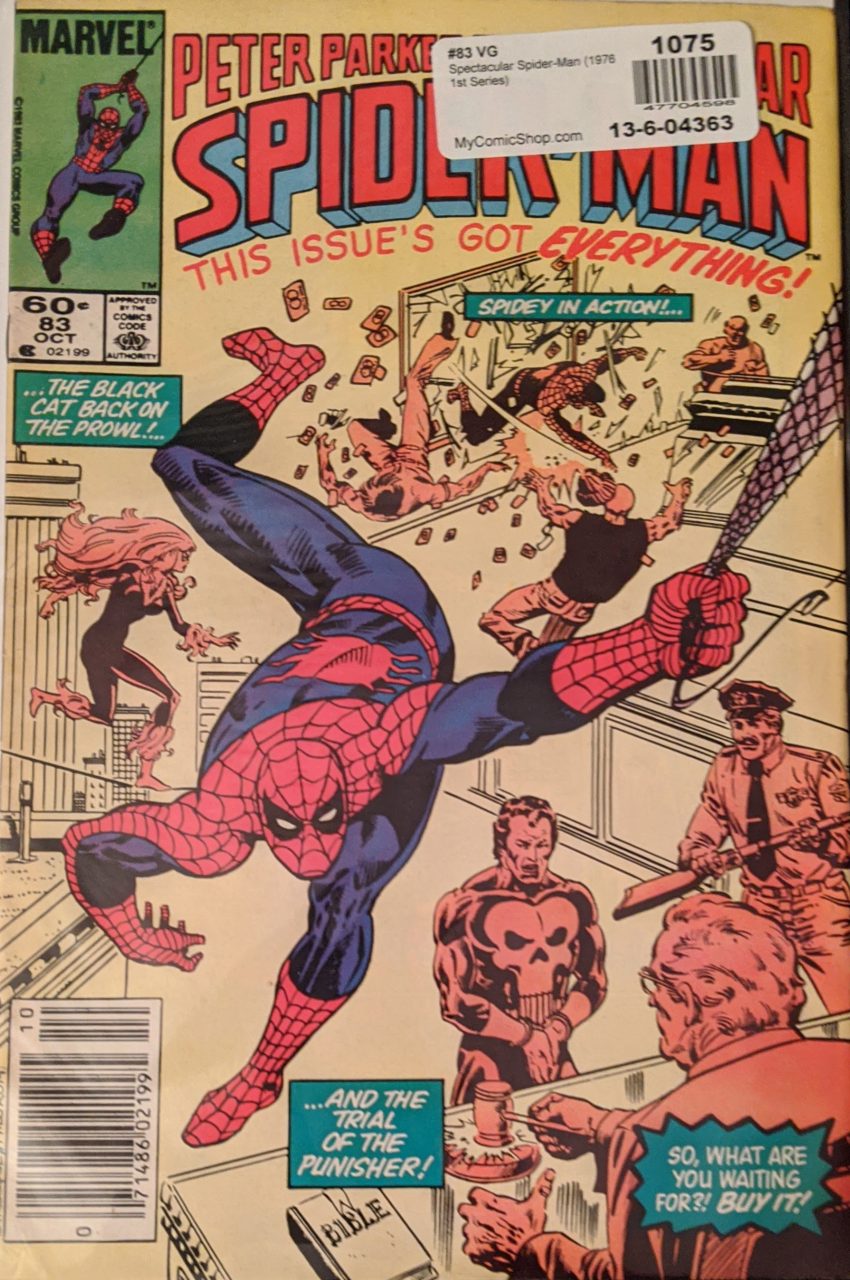 I love an issue with everything. That’s only 3 things, tho. I’ve been promised everything with more things in the past. And The Punisher’s getting arrested AND put on trial this issue? That seems fast. Greg LaRoque is back in the penciler chair and George Roussos tags in for colors. This issue opens with Black Cat rescuing a girl from a gang of muggers. Here’s the thing, tho:

Soooooo that’s ridiculous. Meanwhile, Spider-Man is busting up some dudes who make fake credit cards. Man, is that still a thing? Seemed like something people were really concerned about in the 80s. Now they just steal your info.

“Police Lady” seems a weird thing to call someone. DeWolff thinks to herself about how she’s into Spider-Man as he leaves, not for the first time. Spidey recaps his recent adventures to himself/us, and also thinks The Punisher is to be arraigned today as he heads to visit Felicia in the hospital. Huh. So I guess Punisher was picked up by the cops from Kingpin’s house? Why is he not dead, seriously? Whatever, I guess. Felicia’s not in her room, of course, having passed out in that alley.

That’s not how the Spider Sense works!!!

99% of the time, Felicia is the one being awful in their relationship, but disappearing into your own thoughts and then just jumping out the window is not cool, man. He swings off worrying about the idea of Cat being his crime fighting partner as we turn our attention to The Daily Bugle. JJJ has called a meeting of Peter Parker, Ben Urich, Joe Robertson and Glory Grant to strategize about covering The Punisher’s trial. They’ve heard Frank’s lawyer is going to plead insanity, something Ben says makes sense, but JJJ isn’t sure. Ben recaps Punisher’s origin, told here only for the 2nd time ever, how he and his family were witness to a mob killing, so they were also all shot, but Frank survived, and put his past as a soldier to work going to war with criminals.

You’d think that conversation would continue on the next page, but it does not. Weird. We cut abruptly to the hearing instead. The state argues he is methodical in his actions and not crazy, while the defense tries the insanity plea. But Frank himself can’t stomach that, interrupting the judge saying he’s not fit to stand trial to declare that he’s not crazy.

Seems like an absurd question Peter’s asking himself down there, but that’s pretty much what happened during the grimdark nonsense of the mid-90s. Behind the scenes, Tom DeFalco has been promoted to Marvel’s first-ever Executive Editor, and Danny Fingroth has taken over as editor of the Spider-Titles. Thus, the tight continuity the books have been enjoying will give way to the irreconcilable mess of the black costume era soon. They can’t all be winners.