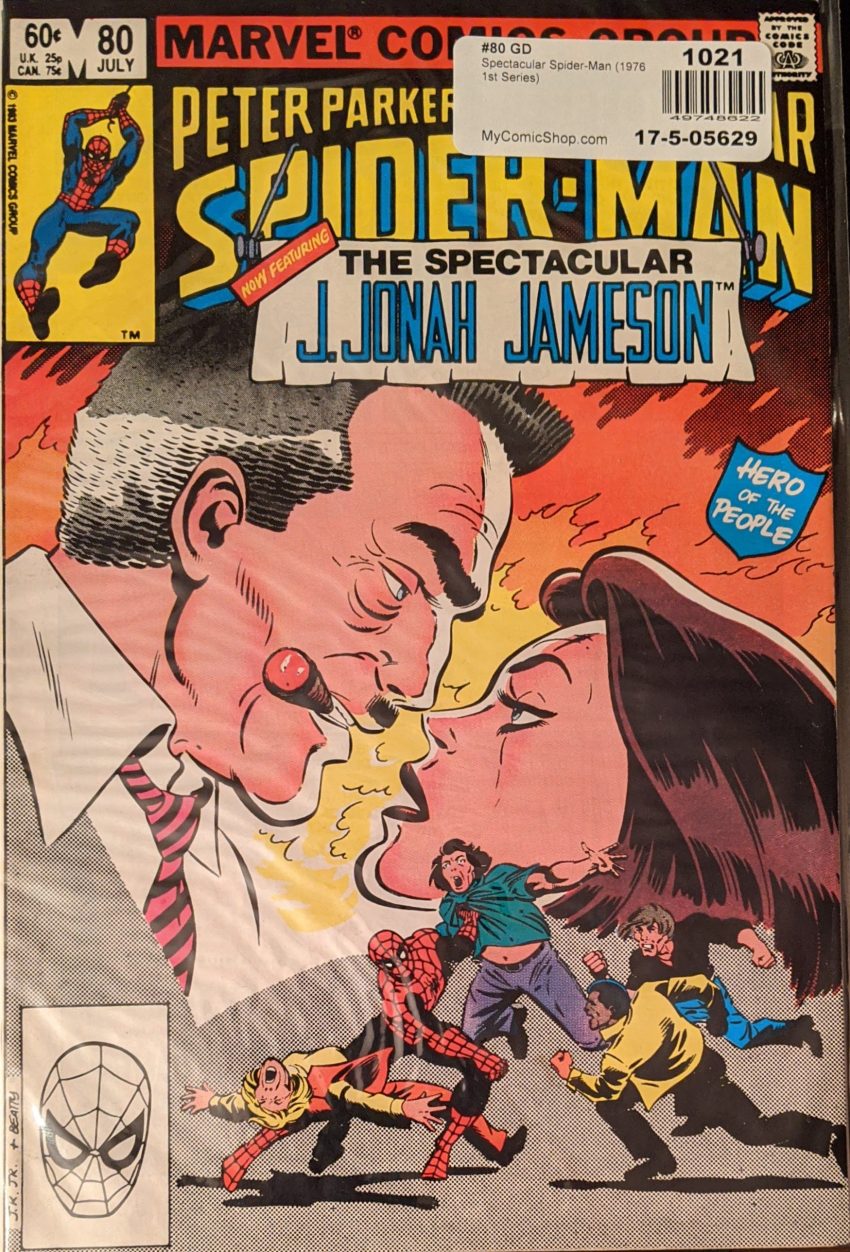 No question this is gonna be a wacky one. Bill Mantlo, Ron Frenz (Is this his earliest chronological Spidey work?), Kevin Dzuban & Bob Sharen at the wheel. This one’s called “I Cover The Waterfront,” and is narrated by JJJ typing a story.

It’s only a single montage panel, and yet it’s more than enough for Gerry Conway’s JJJ backstory in Web 52 to complete contradict it, sheesh. They art team is clearly trying to evoke Ditko’s Jonah, but… not doing it too well.

So, that’s what we’re doing today. JJJ is gonna prove he’s still got what it takes. He storms into The Bugle and tells Robbie to assemble the (regular character of Spider-Man) staff in his office so they can run down for him/us what’s going on with this waterfront thing.

As JJJ goes out to try to get himself killed, Peter Parker follows, and soon, Spider-Man follows instead as Jonah heads to The Century Club, which I believe he’s not been to since the 70s, to harass The Kingpin. Ostensibly about the waterfront thing, but really they just trade barbs about The Bugle not being able to get stories published about him, and Jonah shows him a folder full of damaging info about him. Kingpin rather reasonably asks why Jonah would show him this.

As JJJ breaks into the offices of the Dockside Federation (??? He literally smashes a window!) to get info based on what Kingpin told him, Spider-Man is still on his tail. And soon, so are various goons. JJJ runs, not seeing Spider-Man take care of his pursuers. But there’s more goons outside, and also… a bunch of giant Daily Bugle newsprint rolls?Just standing out in the open, exposed to the weather? This is a really confusing sequence. Some dudes start shooting machine guns at JJJ, but he hides behind the big newspaper rolls.

What is even happening? Where are we? We’re still at the docks somehow. JJJ runs into a building, but trips over a coil of rope and is soon face to face with his would-be assailants, led by Hadley Barnstrum, his informant. Barnstrum also runs the Dockside Federation, which exists to prevent corruption, and has been using it to facilitate corruption. JJJ says he threw everyone off by providing info and calling for an investigation, which seems really shaky. He whips the rope he tripped over at the assembled thugs, which somehow scatters at least 6 grown men long enough for him to run away. He drops his folder full of evidence in the process, but lucky for him, Spider-Man is there to cover his escape. He runs up onto a ship and is once again cornered (How many of these guys are there??).

I think I’m more ready to believe a spider bite gave Peter his powers than I am to believe Jonah survived that fall. As he swims for shore, he expects to be shot, but instead hears the sound of fighting up on the ship. Some cops pull him up onto a dock, asking if he called in the anonymous tip. He did not. But we know who did.

The idea that the narration was a news story was already not really working most of the time, but it really went out the window on those last 2 pages. Pretty wacky, as expected. Come back next time for something completely different.