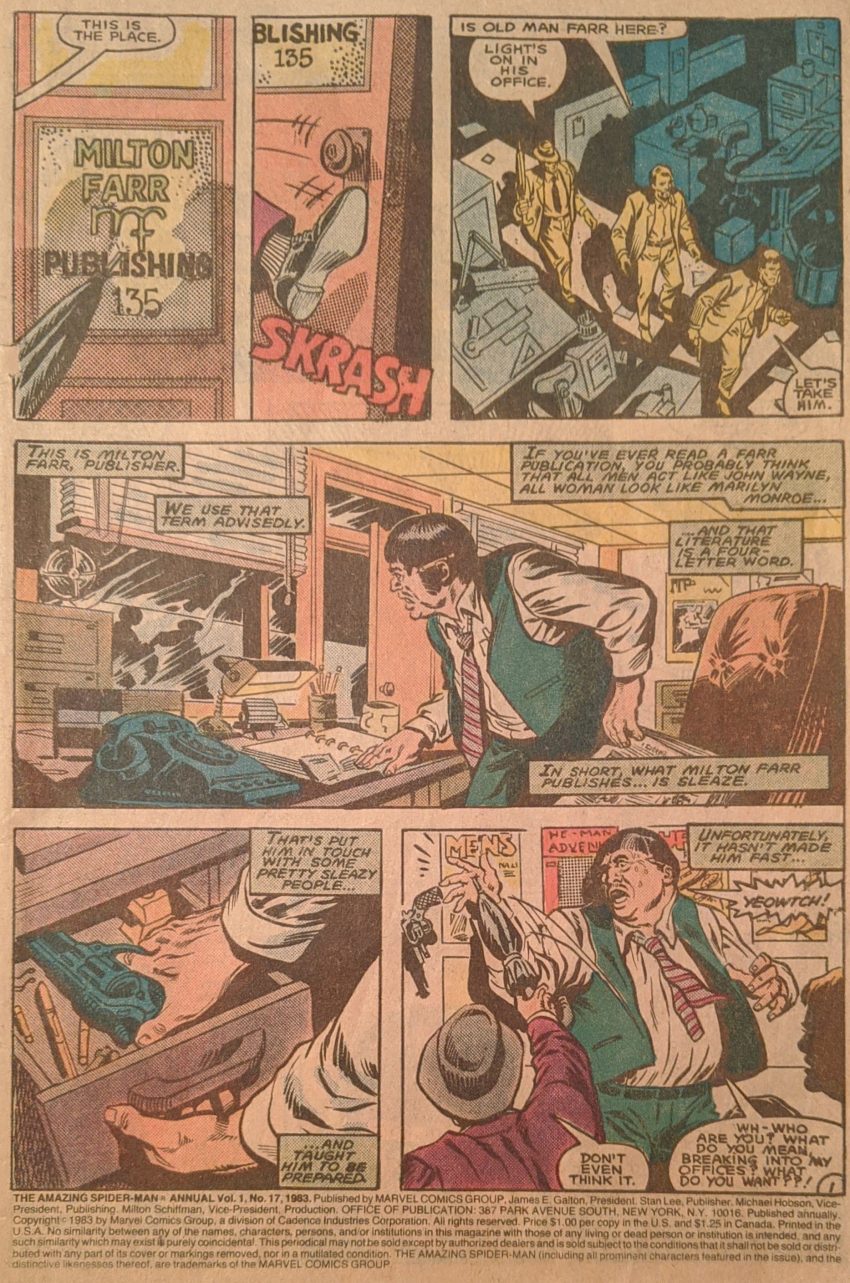 I have absolutely no idea where this came from. I can tell I’ve had it a very long time, but… whence came it? And sans cover, no less. I also don’t remember the story at all. A total mystery. We shall discover this one’s contents together. It’s a Roger Stern plot, but the rest of the team is the Spectacular Spider-Man team for some reason? Bill Mantlo scripts, Ed Hannigan draws, Jim Mooney inks. George Roussos colors. This guy Milton Farr is being harassed by unidentified assailants who know he has some kinda dirt on The Kingpin. But Farr knows Kingpin would do worse to him if he tells them, so he’s not talkin’. Meanwhile, Spider-Man is busting up a fencing operation.

I am liking those eyes on the mask. Speaking of Hannigan drawing like Frank Miller, we learn The Kingpin was in the room with the guy shooting the guns at Spidey. He leads that guy, a Mr. Gilbert, to his gym, where he says the Farr guy was kidnapped tonight. The dirt Farr had on Kingpin apparently came from Gilbert, so between that and the Spidey incident, it’s curtains for this guy. Kingpin says he’s made sure the cops will know the fencing business was his, then breaks his legs and has him thrown out of his tower. We’ll have to check on Gilbert later, maybe, because we then follow Spider-Man to Peter Parker’s high school “pre-reunion!” What is that? This is an unusual story idea. Peter doesn’t actually want to go, and is thinking of ducking out early when…

All those former jocks are actually pretty impressed by Peter’s photographer job, and even more shocked when Flash Thompson walks up and they all find out he & Peter are friends now. This is a pretty fun conceit. Flash wants to talk to Peter about something serious, but a weird cartoon of an insurance salesman and former classmate of theirs named Louie barges into their conversation to try to sell them policies, and Flash takes off. Peter catches up with a montage of former classmates we’ve never seen before, thinking he’s glad he came, after all.

Louie gives CJ a card, and CJ slumps into despair. Peter thinks maybe he can do something to help his old friend, and goes to The Bugle, where Ned Leeds tells him “Remington Colt” is a pseudonym for writers at Milton Farr’s company. Well, then. Betty tells Pete that Farr was kidnapped, and now we’re on our way. Soon, Spider-Man is spying outside CJ’s apartment as Louie shakes him down over the phone. CJ is about to launch a children’s TV show, and obviously used to be a Remington Colt, and Louie seems to be trying to blackmail him. In short order, Louie meets CJ and gives him a package, telling him to deliver it to a certain address, which happens to be the guys who kidnapped Farr. 3 goons follow CJ, one with a camera. The guys he delivers the package to are not expecting him, and make him open it. The box is full of money, but also a gas bomb. When it goes off, the goons rush in, I guess about to frame CJ for something, but they’re not the only ones heading into the fracas…

In the confusion, Spidey tries to get the goons to tell him what’s what, but they refuse, so he takes off their gas masks and gets CJ out of there.

Peter tells CJ Farr was kidnapped, and that sends him into a panic. CJ remembers seeing Farr stash whatever he has on Kingpin in a safe in the floow of his office one time. For some reason, CJ has also decided the evidence of him being Remington Colt is in that safe, too, and decides to go try to get it. Peter offers to help, b ut CJ says he’s done enough. Naturally, soon Spider-Man is tailing him. But elsewhere, Farr has finally cracked under torture, and so his tormentors know about the safe, too. But Spidey beats everyone to the office, and is soon in possession of the McGuffin. Improbably, there is evidence that CJ was Colt in there, alongside Kingpin info. This could be all wrapped up, but Spidey chooses to take the Colt stuff for CJ and leave the rest for the cops to find. Why would you do that, man?

It’s Louie, of course. While Spider-Man is off calling an anonymous tip to the cops, Louie is revealing to CJ that he was Remington Colt after CJ, and Farr was always comparing him to CJ, so that’s how he knows about all this. Then Louie gets shot in the arm by the goons who kidnapped Farr, and things are looking bad until Spider-Man comes back to get photos of the cops finding the safe.

Louie is stopped from shooting CJ by Spider-Man as CJ dumps the opened safe in the fire some homeless guys are crowded around, not knowing he’s saving the Kingpin and doing nothing to help himself, so that’s that for that. We cut to Louie telling Kingpin how he saved him, but once he leaves, Kingpin says those files would’ve been leverage against other people, and he’s lost it, so Louie should get his “proper reward.” Whew. Twisty one, this is.

This has all been great reasons you never go to these reunions. At best, people aren’t how you remember them. At worst, they try to set you up for The Kingpin. It could happen to you!