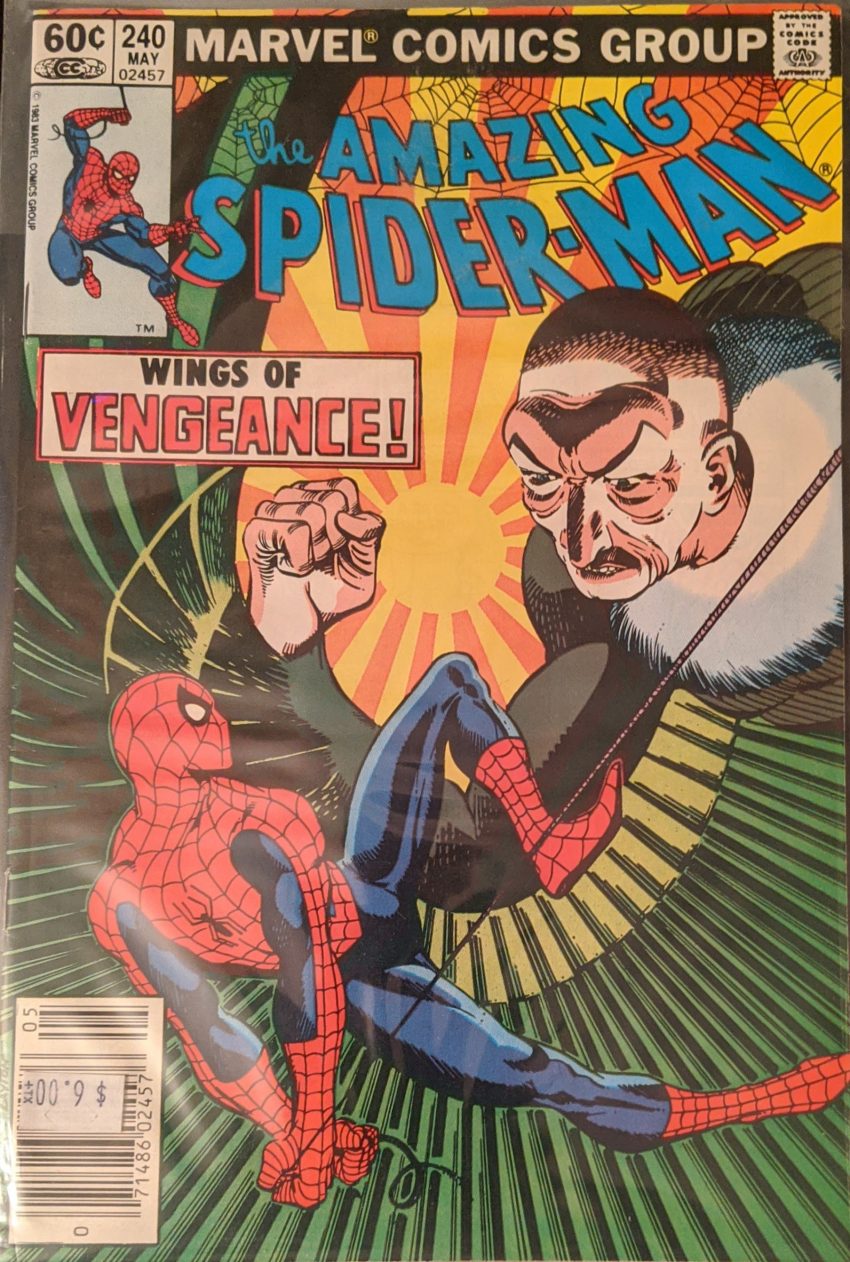 Feels like it’s been forever since I read any Stern/Romita ASM. And I guess it has, 10 blocks. But it’s good to be back. It should be obvious by now that I am a big, big fan of Stern, but no one’s perfect, and his Achilles heel is right here on the cover. He has said he loves the old vs. young dynamic of The Vulture and Spider-Man, and ok, sure, but this is Rog’s 3rd Vulture story in as many years. Too much Vulture if you asked me. It’s gonna be great because it’s Stern & Romita, Jr. (And Bob Layton and Bob Sharen), but how much better would it be to use a different character? Anyway! A newspaper on page 1 references the Owl/Doc Ock gang war that’s just concluded in TAC, which is nice.

Layton has had plenty of experience working with Romita on Iron Man, and is the best inker we’ve seen for him in this era, no question. Look how good these pages look! Peter Parker is having a nightmare summing up his recent life, including The Owl, Doc Ock, Black Cat,  Hobgoblin, even Gladiator, who ends the dream by preparing to chop poor Peter up. A haggard Peter wakes up and finds his bedroom lightbulb has burnt out, and hops up on the ceiling to change it as only Spider-Man can. Then he realizes he slept most of his day away.

As Spider-Man swings away, Amy Powell is downstairs, still trying and failing to get some Peter Parker in her life. And above her, The Vulture is back in town. Vultchy may be a ridiculous villain, but you almost wouldn’t know it they way the art team handles him here.

He actually looks cool! Man, I’m tempted to post every page of this book! It just looks so great. Layton should’ve inked this whole run. He lets more of Romita’s style shine through than Jim Mooney or Al Milgrom, while still tightening up the details missing from Romita’s loose pencils in this era. It’s perfect. Anyway, Spider-Man swings over Queens, thinking about the old days. He passes the lab where he got his powers and his old high school in full nostalgia mode before reaching Aunt May’s. She & Nathan are the only ones home at the moment, and she tells Peter she’s just found out Anna Watson is coming for a visit (She still lives in Florida at this time). Nathan is eager to show Peter his new toy: cable television! And on said television, they see The Vulture begin menacing that electronics show, leading to this awesome quick change sequence:

Man. Welcome back to the John Romita, Jr. Fan Blog. Down at the Expo, Lt. Keating has set up a perimeter, and the last thing he wants is help from Spider-Man, but our guy rightly tells him The Vulture could just start killing people if the cops rush in, but he hates Spider-Man enough that Spidey could probably lure him away from his hostages. Inside, The Vulture is wrecking everything in site looking for Gregory Bestman when Spidey drops in from an air vent, and you know what time it is.

Covering this ridiculous development with a solid joke works pretty well. Vulture realizes he’s not getting anywhere in his vendetta with Spidey around, so he sets off a bunch of industrial robots to keep Spider-Man busy while he searches for his enemy. That barely slows him, though, so Vultch admits he better just run for it and sets of some kinda crazy machine that starts shooting lightning all over the hall.

Spidey tries to hide in the shadows near the only way out of the hall, hoping to catch The Vulture as he exits, but then one of those lighting bolts finally gets him. As he falls off the ceiling, barely conscious, he just manages to grab Vulture’s leg.

Is Spider-Man dead? I think Spider-Man’s dead! That’s a shame. Come back next time to see how this all shakes out.