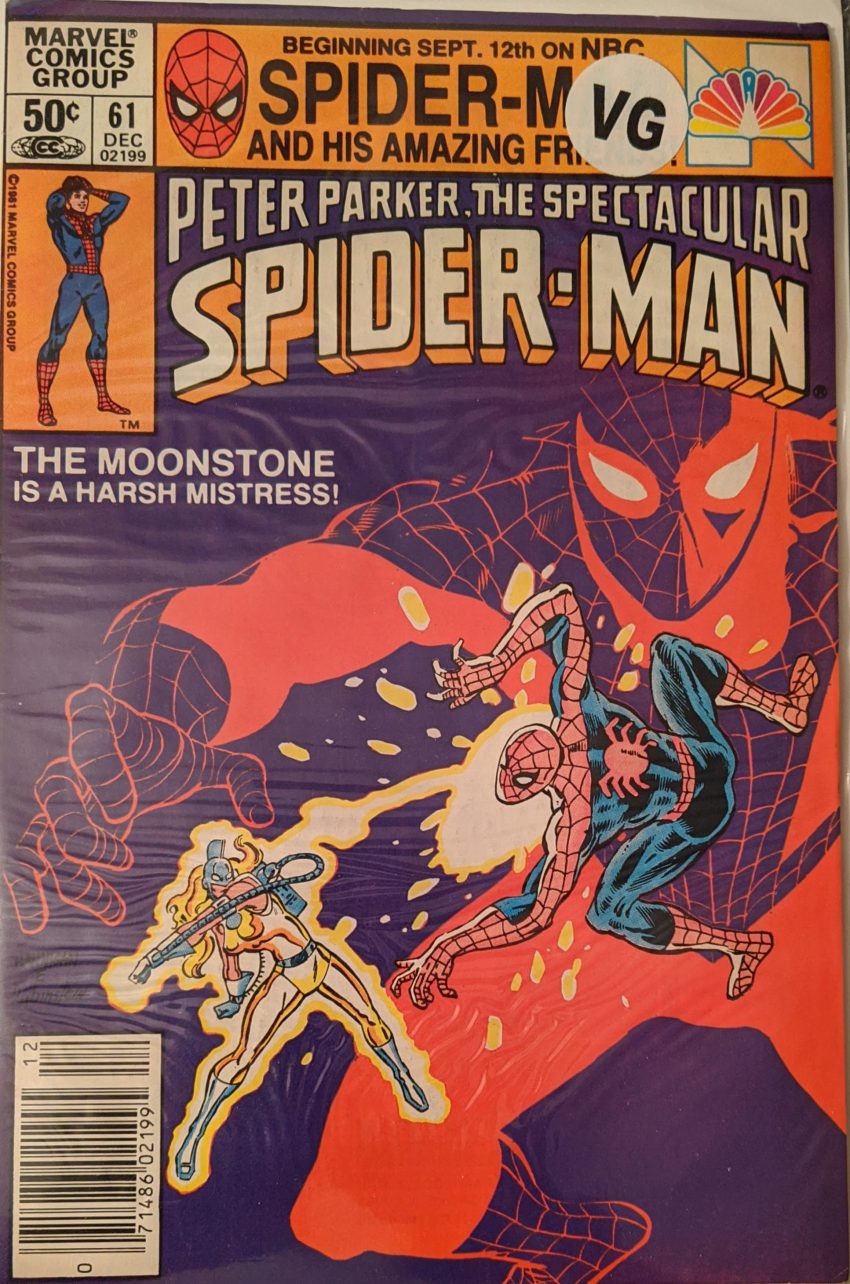 This time we got a plot by Roger Stern, script by Bill Mantlo, pencils by Ed Hannigan and inks by Jim Mooney. Roger is juuuust about to make the jump to Amazing, so maybe he had to duck out early on this one. And I believe Bill is coming back as regular writer on Tac when he leaves. I don’t know for sure. We’ll find out together. After this adventure against Moonstone. Moonstone is an unusual choice for a Spidey story, and that’s great. I like it when they mix up the villains. But before she shows up, Spider-Man’s just out doing his thing when he happens upon a kid hanging out his window on sheets tied together. That doesn’t go so well, and soon he’s falling to his doom. Luckily, Spider-Man swung by. Spider-Man just swings by like 80% of the stuff he gets into. Makes you wonder how much superhero stuff is happening elsewhere in the city. Maybe that’s why New York needs so many heroes. Every single jewelry store in Manhattan robbed twice a day, and there’s kids falling out of every window. Anyway, Spidey snags the kid and takes him up on the roof to ask him what he was doing.

Spidey does his best to scare the kid off of killing himself trying to be a superhero, then heads to ESU, where he hopes to get his homework done. But his Spider Sense goes off, and he notices someone walk right through a wall into the building, so I think homework is going to have to wait. Now, look at this. This is the person:

That is a man. Ed Hannigan is drawing a man. But it’s also obviously Moonstone. And Ed clearly knows it’s Moonstone because he has smaller, more feminine hands in the surprising number of close-ups of the hands on this page and the last one. So, like… why? No further questions. Spider-Man eventually realizes that dude is not a dude.

And we’re off. There is much dodging and zapping. Enough to get the attention of a nearby Marcy Kane, up late working. She goes to investigate just in time to see Spider-Man crash through the door. A slightly stunned Wall Crawler tells Marcy to run and calls her by her name. Probably a mistake! Marcy’s no dummy, and runs off wondering how Spider-Man knows her name. Moonstone does another big zap and catches both Spidey and Marcy in the blast. Marcy’s not breathing, so Spidey has to let Moonstone steal the Enervator while doing CPR.

This wild plan actually works, so the guard finds Peter Parker kneeling over his still unconscious frenemy. Outside, Deb Whitman and BIFF RIFKIN are walking by (Wasn’t it supposed to be super late?), and see Marcy being loaded into an ambulance. When the guard tells her Peter saved Marcy, Deb is filled with doubt about her choice in men lately. Don’t do it, Deb. BIFF RIFKIN has the stupidest name in comics, but he’s not gonna drive you crazy. Alas, she won’t listen. Back inside, Peter gives his statement to the cops, pretending he just heard a noise like Marcy and came to find her unconscious. But the cops find his signal light with a hole shot through it, so they know Spider-Man was there. Dr. Connors finally shows up to see what happened to his lab, and the cops say they have to put out an APB on Spider-Man. Pete takes his leave, changes clothes, and appears outside Connors’ window when the cops leave to tell him what was stolen. He already knows, though:

Sure is lucky Curt randomly had a device that tracks the energy emitted by a device that never leaves his office. Moonstone is hanging out in a condemned building yelling supervillain stuff to herself before recounting her origin. How she hung out with Captain America’s enemy, Dr. Faustus, looking for power. How she talked a previous villain named Moonstone into giving her the Moonstone so she could become Moonstone. Also, this is not to be confused with John Jameson’s Moonstone. Different Moonstone. How many times can I type Moonstone? Moonstone. Then she fought the Hulk on behalf of “The Corporation,” and now she’s looking to prove how bad she is so she can join a new super-evil group, and hopes the Enervator will boost her powers to do so.

The Enervator has made her insanely powerful, but Spidey is genuinely worried it will kill her, so he spends the fight dodging and telling her to take it off before she gets hurt, which is the last thing you want to tell a power-mad supervillain. Eventually, though…

Moonstone is furious now, and zaps Spider-Man so hard he accidentally throws the Enervator across the construction site. Cops come to try to pick it up, but it’s still on, the radiation is knocking them all out. Moonstone shocks a big crane loose so it will fall on the gathering crowd, and it’s time for Spidey to do what he does:

You think they made her a brunette just so you could more easily tell her & Deb apart as they fight for Peter’s affections? You know what they say about Spider-Man. He’s “the everyman superhero.” He’s an everyman, just like you and me, women throwing themselves at him every time he steps out of his home! It’s a little much. But I guess he has gone a long stretch of issues without an real love interest. And will continue to do so for awhile yet.

At this time, I would like to talk about 14k gold chains. For many issues now, these comics have had ads for 14k gold chains for only $10 until December 31. It’s a really plain ad, no graphics, no fancy business. You send them $10, you get a chain. You can get up to 5 chains, and if you don’t like ‘em, you get a refund, no problem. It’s a weird ad. It feels like a scam. Well, this month, the noose tightens:

Who was selling these chains?? What was their agenda?? How do they think I feel having bought 5 chains for $10 last month and now I coulda got them for $8?! There’s gonna be a riot!