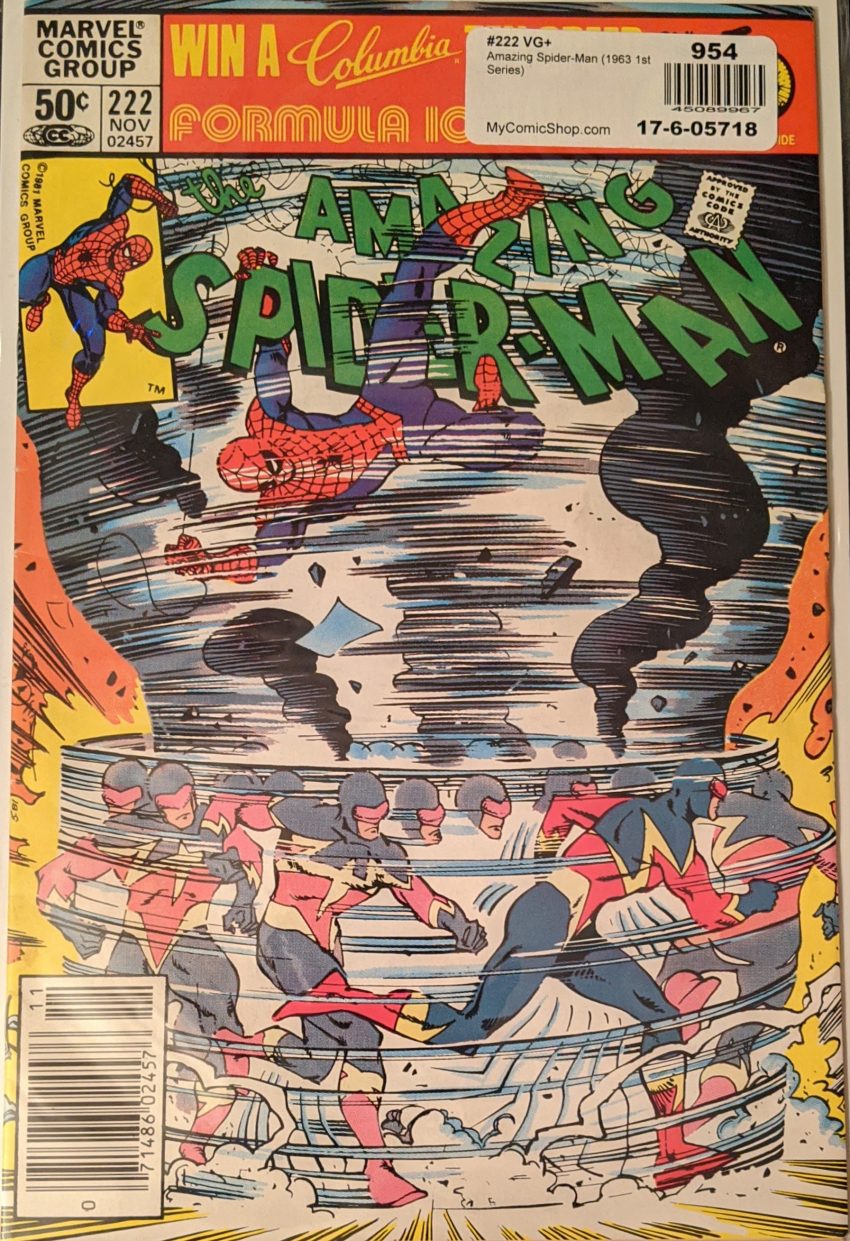 I wish this one was a different cover concept, because it’s Frank Miller inked by Walt Simonson, and that sounds weird, and I’d like a clearer picture of their Spider-Man. This one’s brought to you by Bill Mantlo, Bob Hall & the ever-present Jim Mooney.  It opens with Spider-Man happening on some dudes stealing some furs. This… seems like it should not happen as often as it does.

THAM! Spidey makes short work of most of them, but one gets away in an armored car. Spider-Man swings off, gets ahead of him, and webs up the alley he’s trying to escape through, ending the chase. Spidey swings back to deliver the goon, but the people from the store tell him they’ve read all about him in that Daily Bugle and he’ll just steal everything for himself, so he leaves. As he swings off, something else sets off his Spider Sense in a different store, but he can’t see anything wrong. And that’s because they’re being robbed by a new villain called Speed Demon.

Super speed seems like a better power for a villain than a hero. Gives the hero something to chase. And chase Spider-Man does. Unable to land any hits, he manages to snag Speed Demon with a web, and is then dragged all over town. Speed Demon tells Spidey it’s nothing personal, and even tells him he plans to rob the biggest department store in town tomorrow, figuring there’s nothing Spidey can do about it, and then zooms off. The next day, at The Daily Bugle, JJJ is furious they don’t have pictures of Speed Demon.

Elsewhere, Speed Demon is patting himself on the back, and recaps his origin for us. He was a chemist, and The Grandmaster (Like in Thor: Ragnarok, but also not) appeared to him and helped me make a super-speed chemical. You know, like ya do. Then he became The Whizzer in the Squadron Sinister (Don’t ask), and after getting beat up by The Avengers a few times, he’s decided to start over with a new outfit and codename. Alright. That’s settled.

Speedy goes around stealing expensive stuff right off the patrons as Peter ducks into a changing room and out comes Spider-Man. Spidey has learned the layout of the store in advance, and hopes it will give him the edge in the fight. Speed Demon’s antics cause all the customers to flee, and Spidey makes sure no one get trampled, and then it’s time to settle up.

Speed Demon tried to create a vortex to pull Spider-Man in, but all he does is pull in a bunch of furniture that smashes into him.  Then Spider-Man tricks him into racing into a closet full of mannequins, now, in full on Bug Bunny mode.

Speedy’s had enough, and starts trying to escape. Spider-Man sprays him in the face with a generous portion of perfume, blinding him. Then he finds all the exits webbed shut. And finally, Spider-Man trips him down an escalator and gets a solid punch in.

And that’s where we leave it. You could always count on Bill Mantlo to deliver the filler in the 70s & early 80s.