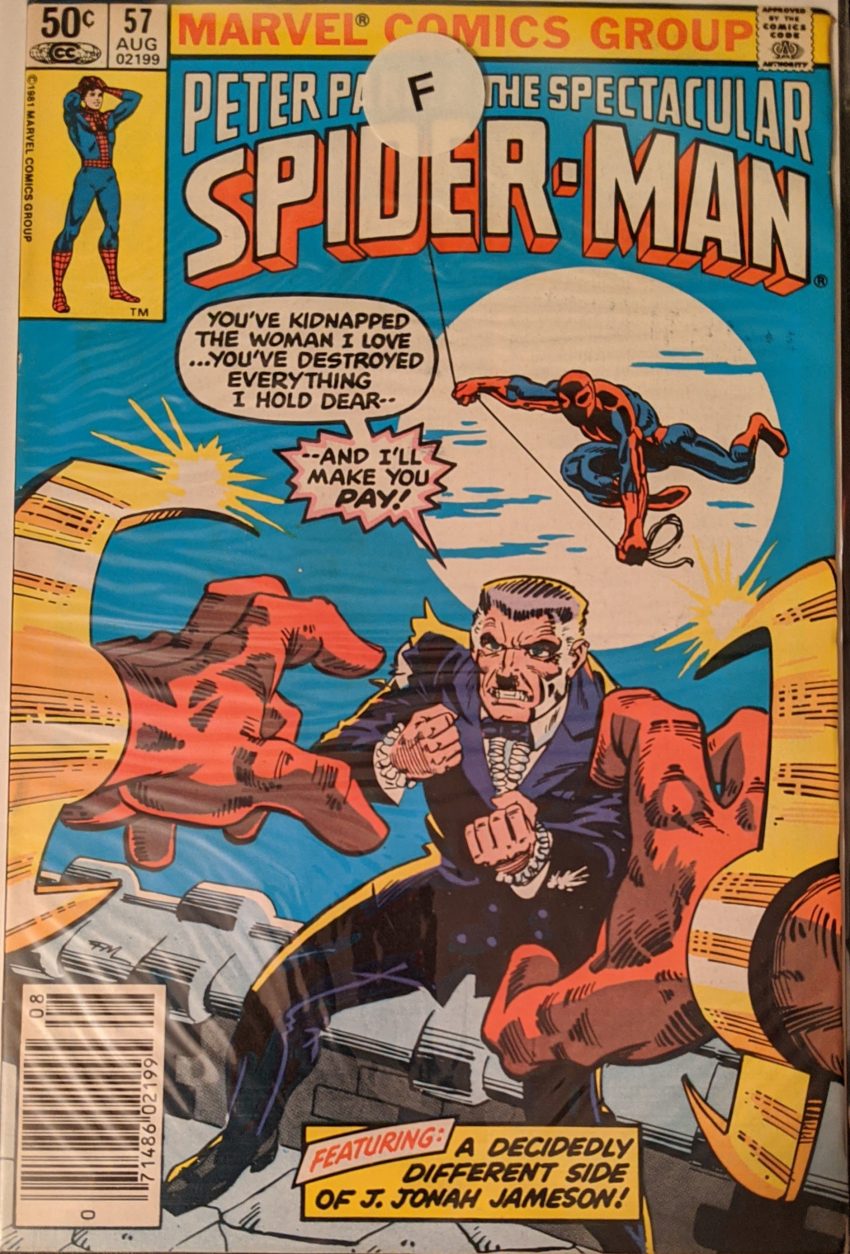 It’s another one with Roger Stern writing, Jim Mooney inking, and Jim Shooter drawing layouts, which is still pretty crazy to me. Peter Parker is swinging home with a tux he rented because JJJ has demanded he come photograph and event he’s throwing tonight. As he’s swinging to the event, a cloud of weird stuff starts following him.

The Amazing Spider-Man goes diving toward the street to avoid having to pay for a tux. When he’s down there, he sees a payphone and thinks to call Aunt May out of the blue. He tries to apologize for upsetting her last issue, but she’s already totally over it. That’s convenient. Spidey suddenly realizes that glow around him was probably Will-O’-The-Wisp, the character with the most annoying name to type, trying to contact him. He disintegrated last time Spidey saw him, and who knows, he could be trying to reform. But by now, Spidey has reached the event, so he can’t worry about that for awhile. It turns out that Jonah is throwing a party for his beloved, Dr. Marla Madison, who just got a big new job at The Brand Corporation. Peter is just there to get paparazzi-type shots. He’s a little late, and JJJ is typically unhappy.

Take THAT, Alan King! Also, Peter is being creepy. Kingsley’s current lady is scared off by oe of his previous ladies in a weird sequence, amusing Peter, and then the big bodyguard steps out for some air just as the cloud that’s probably Will O’ The Wisp shows up.

Uh-oh. As Melvin gives a speech about Marla being the world’s best electro-biologist, the cloud forces the bodyguard to reveal his whole Killer Shrike outfit, and then rush inside and kidnap Marla!

Melvin is fully aware his bodyguard is Killer Shrike, and that’s why he hired him. Brand is another of Marvel’s shady corporations. He rushes off to try to keep Shrike from ruining the company, unaware Spider-Man is following him, while Shrike flies Marla to a Brand facility she’s not supposed to see against his will. It’s full of shockingly advanced technology, and Shrike knows he’s in trouble for letting Marla see it. The thing controlling Shrike forces him to write “Please help” on a chalkboard, and he’s fully on board with that plan if it will get him control of his own body back. Then the boss man (And Spidey) arrive, as well.

Then the unconscious form of Shrike raises an arm to shoot at Spider-Man. As Spidey contains the situation, Marla explains that she may be the only one who can save the life of the person inside Shrike’s suit who is, of course, Will-O’-The-Wisp. Spidey tries to get Marla to let him help her, but she just wants him to leave.

Good to remember the important things mid-fight. He webs up all the goons who’re still conscious in the corner of the room, and then really does call Aunt May, right in the middle of a battle and a super-science experiment!

Amazing. Then Killer Shrike wakes up and starts attacking him, no longer under Wisp’s control, but he’s back out in another 3 panels, because Spider-Man is a professional. He checks in with Marla, who says some shrapnel hit the machine and it’s not getting enough power, so Spidey offers to use the blaster’s on the unconscious Killer Shrike’s suit to juice up the induction grid. It even works, bringing Wisp back to normal, human form. And he’s not wasting any time.

Spider-Man is able to get Marla, Killer Shrike and all the guards he beat up out before the fire gets out of control, and then makes a run for it before anyone can blame him for it.

No one notices Will-O’-The-Wisp flying out of the fire except Spider-Man, hiding on the outskirts of the property, worrying that they may have just unleashed a monster, and we’re out. A briskly paced one, this. They say Jim Shooter had a rule while he was E-i-C that there had to be an action scene by page 8 in Marvel Comics, but he’s not sticking to that as penciler, so who can say, really?