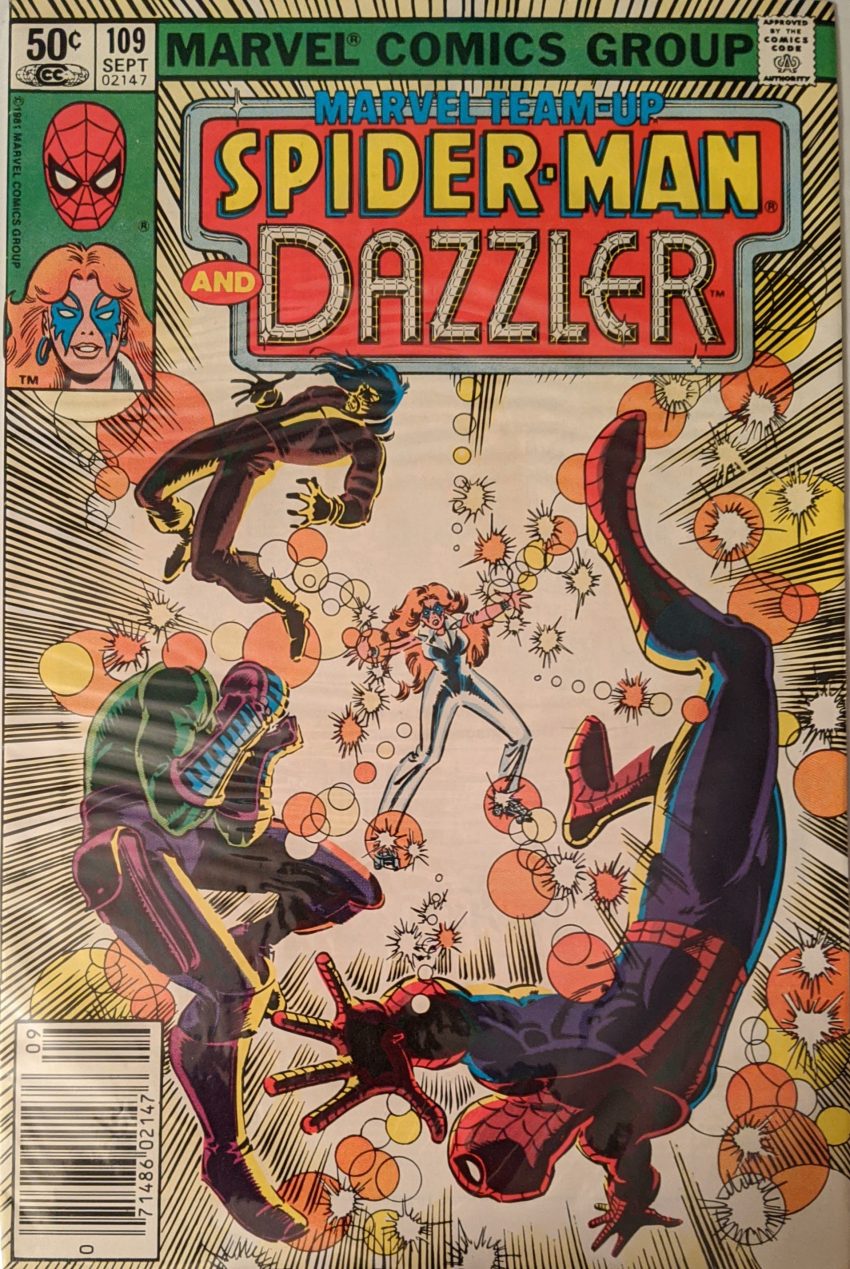 David Kraft jumps back in to finish the story of Thermo, The Whatever-it-was Man. When last we saw our hero, he was being murdered by Thermo, The Lunchbox Thermos Man outside a Dazzler concert. And he still is!

Dazz surprises Thermo into releasing Spider-Man, who manages to get a good lick in as Paladin finally shows back up, zapping Thermo with the so-called nullifier that didn’t work last issue. “Too much is happening too fast!” exclaims Thermo (I feel you), who throws a whole semi truck at the gang and runs off.

Paladin catches Dazzler up on what happened last issue, then decides to leave, saying they can all regroup at the lab from last issue tonight. Spidey gets up to leave, too, but he can barely stand, and almost falls out the window. Dazz pulls him back in and tries to get him to rest. Meanwhile, Thermo, who is thinking of himself now as a god who will begin a new age of men (aim high!) stumbles upon an abandoned building that just happens to have… a cult in it?

Well, that’s silly. The next morning…

Weeeeird thing to think about Dazz, Pete-o! This issue has taken an already slight premise and sent it right off the rails. Spidey swings off to his place, while we cut away to check in on the Daily Bugle and see JJJ planning his latest anti-Spider-Man rant. Then back to Peter’s place, where he’s checking out the nullifier Paladin was using to try to make it work better next time. Then we jump quickly jump to Thermo sending his goons to steal the machine that gave him his powers out of his lab, and they kidnap his wife while they’re at it. Elsewhere, still more of his goons are at a Dazzler concert, where they storm her dressing room and knock her out. Then we jump yet again (All these cuts are on four pages, it’s ridiculous) to the lab, where Paladin has discovered Christine and the machine (Great band name) missing, and then Spidey shows up with a big gadget.

Just then, Spidey & Paladin bust in. Dazzler uses the distraction to get free of her captors and get her stuff back.

Spider-Man webs up some covers for his hands so he can beat up Thermo without getting injured, Paladin shoots some dudes, and Dazzler hits all the goons with a light blast so intense they pass out. Teamwork!

Dazzler gives Spidey time to finally get his helmet on Thermo, and then Paladin knocks him out. These guys really seem to work well together.

Christine refusing to believe the man who murdered his best friend and tried to kill her too not 30 seconds ago is really bad is ridiculous. Paladin is such a weird character. Well, that’s that. You heard it here first, next issue will feature Iron Man. And hopefully not be as bad as this one.