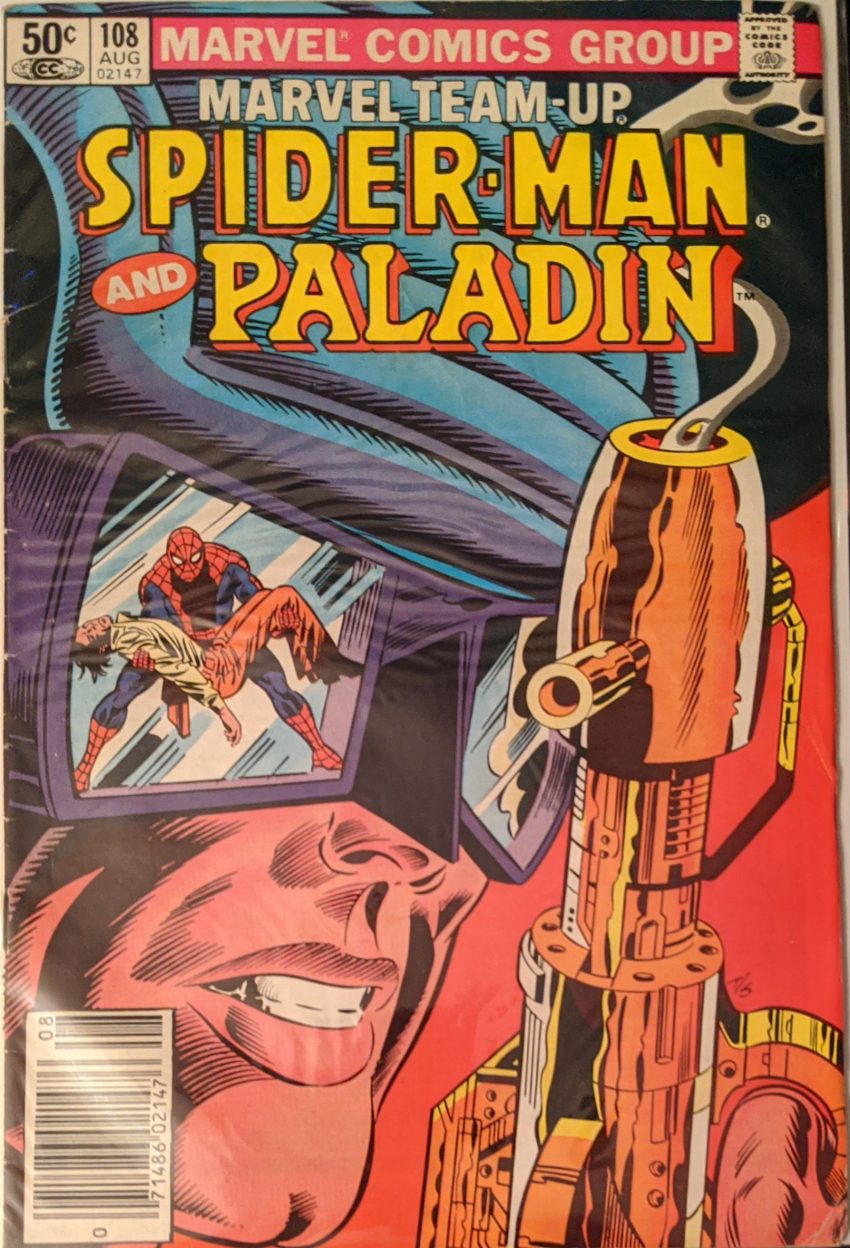 MTU is still looking for a regular writer, it seems, as David Michelinie tags back in to script over a plot by editor Tom DeFalco. Herb Trimpe & Mike Esposito stay on the art. Under an utterly awful title, we open in the middle of a fight…

…then flashback a little to Thermo (I am not familiar) sapping all the heat out of two wouldbe muggers and almost killing them. Peter Parker’s new rival at the Bugle Lance Bannon is there to get some photos when the cops show up, which makes Peter Parker, reading the Bugle in his office at ESU the next day, even more irritated that he hasn’t been able to catch the “street stalker” who’s giving people hypothermia all over town (Is “street stalker” the best the papers can do for such a weird MO?).

Coach… Barnstorm… Ok. Spider-Man vs. the ugly truth about college athletics! What is Peter’s reaction here? What emotion is that? He looks like he’s terrified, sick, and just remembered he didn’t put the turkey in the oven at the same time. Pete goes out as Spider-Man to clear his mind, and happens upon a guy walking into a park with a gun. He sets up his camera, thinking, “Maybe I can show Lance Bannon who the REAL pro photog is!” I mean… Lance at least takes his own pictures instead of having it shoot on auto and hoping for the best, ya know? Maybe this isn’t the right hill to die on. Spidey leaps into the park expecting a mugger. Instead, it’s the mercenary Paladin, who says he’s here on business. Spider-Man doesn’t believe him, though so it’s time for the old “two heroes fight over a misunderstanding” bit. Been a little while, actually.

Paladin, everybody! Lance Bannon gets a photo of Spidey picking up the victim to take to the hospital. I’m sure that’ll look good in the Bugle. Spidey tracks Paladin, still in full costume, to The Gold Star restaurant, emerging from a horse drawn carriage, which is hilarious, but it turns out he’s not really on a date, he’s meeting the people who hired him. They ask Spider-Man to join them for dinner (After he’s forced to make a bow tie from his web to be allowed into the restaurant in a pretty good bit), and reveal themselves to be the best friend and wife of Thermo, the so-called “street stalker.” They tell Spider-Man Thermo’s origin, which is ludicrous. The 3 of them were nutritionists and he devised a machine that would “transmit synthetic vitamins directly into the body via microwaves, tested it on himself, and became a super powered jerk. Sure, like ya do.

Back at his place, thinking about trying to cash in on your superheroin’ makes Peter think of how he tried to cash in when he got his powers, which leads to a 3-panel retelling of Spider-Man’s origin for some reason, and then the decision to help with Thermo, after all. The next day, at the Daily Bugle, Peter tries to deliver his photos of Spider-Man fighting Paladin, but Lance Bannon has already brought his pic of Spidey carrying an unconscious person in, so JJJ is already well into crafting a story about how Spider-Man is the “street stalker.” Naturally.

Paladin has tracked his target to an abandoned printing house, where he’s just named himself “Thermo, the Thermatronic Man” (bit of a mouthful), then told himself the power is controlling him and he needs help, and then the heroes come crashing in.

I am a fan of David Michelinie, but Christine talking to the machine here is so funny, oh man. I can only hope this was done Marvel Method and Trimpe drew her hugging the machine and Michelinie just worked with what he had. Anyway, Thermo shows up, assumes his old friend and his wife are together now and kills the dude. The heroes show up too late, then rush off after their prey, and now we’re about caught back up to page 1. Paladin finally uses the nullifier thingie he got earlier…

Well, that’s it, guys. Spider-Man is dead. Come back next post for the all-new adventures of Paladin & Dazzler, definitely not featuring Spider-Man!