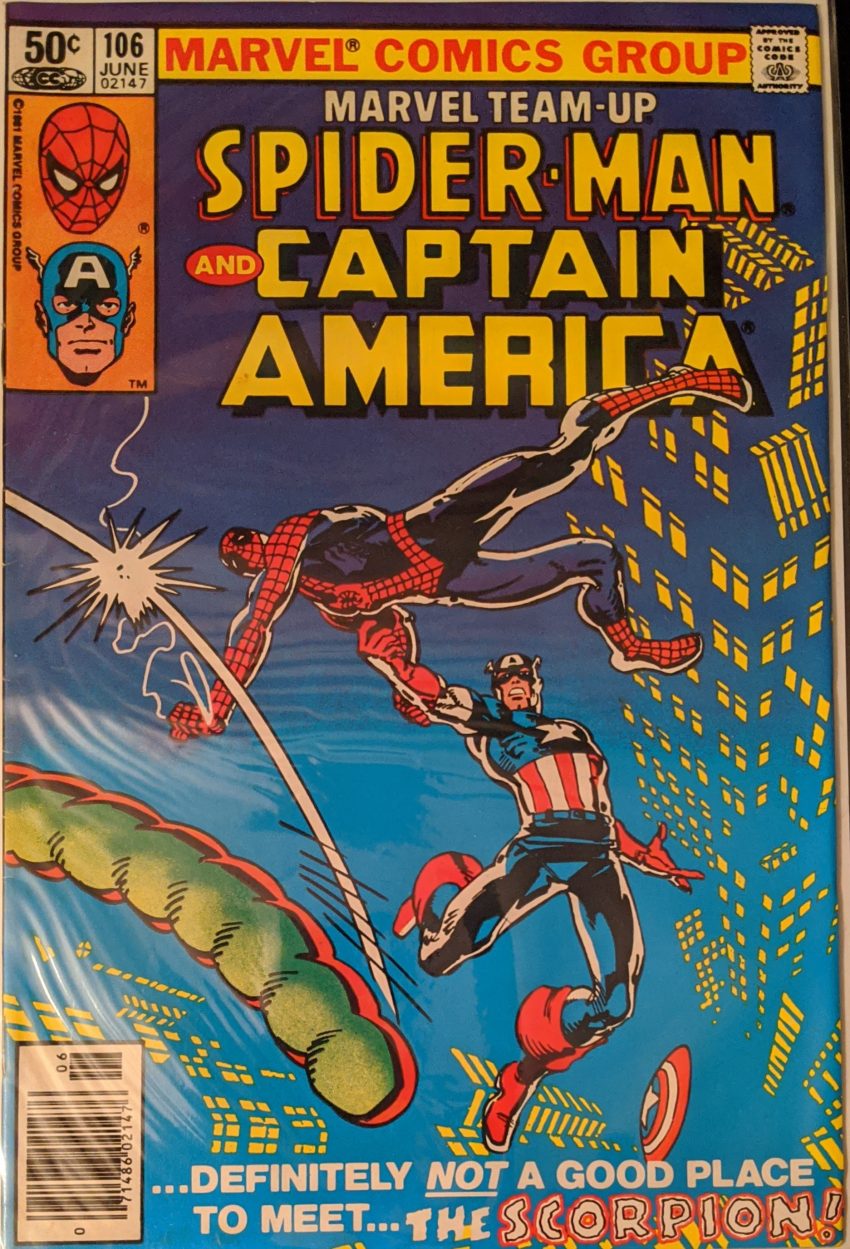 This is yet another of the 77 MTUs I got for $44. After 2 months of Hulk & Ka-Zar, MTU is back to being the Spider-Man title it’s supposed to be. And both Spectacular and Team-Up have been featuring Frank Miller covers lately, even as he’s doing Daredevil. Busy guy. This issue comes to us courtesy of Tom DeFalco, Herb Trimpe and Mike Esposito. Herb Trimpe is famous for a long run on Hulk. Tom DeFalco will go on to a long career with Spider-Man. Let’s see what they get up to here. It opens with Mac Gargan, the Scorpion, unresponsive in a psychiatric hospital.

The Scorpion “the most deadly, brutal costumed criminal of them all?” Haha, ok, doc, whatever you say. Guy swings a stick at people with his butt and he’s #1. I guess these guys can’t be too smart, I mean, look at this. Is how J. Jonah Jameson paid to create the Scorpion really common knowledge? Shouldn’t JJJ be in jail?

Does Tom DeFalco have a grudge against psychiatrists or something, to portray them as such morons? I dunno, but now we got a Scorpion on the loose. All he ever does is try to kill JJJ, so he runs off to try to kill JJJ. We cut to ESU, where Peter Parker has heard on the news that Scorpion broke loose and is rushing off to look for him. DeFalco even squeezes in a “Peter ignores Deb” moment.

Next page he says he hates to ignore her like that, same ol’ same ol’. No mention of BIFF RIFKIN. Then Spider-Man explains how his webshooters work in case you don’t know and then he’s off. But he swings all over town for hours and never gets a tingle of his Spider Sense, and packs it in, having classes to teach in the morning. Meanwhile, Scorpion is in an abandoned restaurant, recruiting goons to be in his gang. And showing off that he’s modified his tail to shoot an electro-magnetic blast. That’s a good upgrade for him, I wonder why it didn’t stick. Scorp’s first plan:

Classic JJJ. Then some goons try to attack “the last store in a fifteen block radius selling the Bugle” and Spidey shows up. He stops them, but is no closer to finding the Scorpion. He takes some pics and drops by the Bugle to try to sell them. Remember how the cover said Captain America was in this?

It’s as Steve Rogers is showing Robbie his work and Peter is being rebuffed trying to sell photos that Scorpion chooses to finally come to the Bugle and kill JJJ. Incrrrrredibly bad timing on his part. As Scorpy bursts into the city room, chaos erupts, and both heroes run off to change clothes.

What a guy, that Jonah. Cap goes a couple rounds with Scorpion and then Spider-Man finally shows up, eliciting some of the worst dialogue I have ever read…

“Yet you are not a monster and I am!” Yeesh. Scorpion’s new tail zap catches Spidey by surprise, knocking him out the window and unconscious, but Cap dives out after him and manages to bounce them off a flag pole and into an awning to save them. Scorpion makes off with JJJ while they’re gone, so they head out to find him.

That is ridiculous. The heroes fight Scorpion & his goons, and then Cap makes a petty decisive blow:

This one was a chore. DeFalco is over-explaining everything, Trimpe’s art is… not to my taste, and Scorpion’s a dope that doesn’t take 2 heroes to stop. Not my favorite issue. I’m surprised to see Tom DeFalco had already been working for years before this. This was really amateurish, and I’ve certainly seen him write good Spider-Man comics, starting only a few years after this was published. I just assumed this must be near the very start, but he’s many years into his writing career by this point. Ah, well. They can’t all be winners.