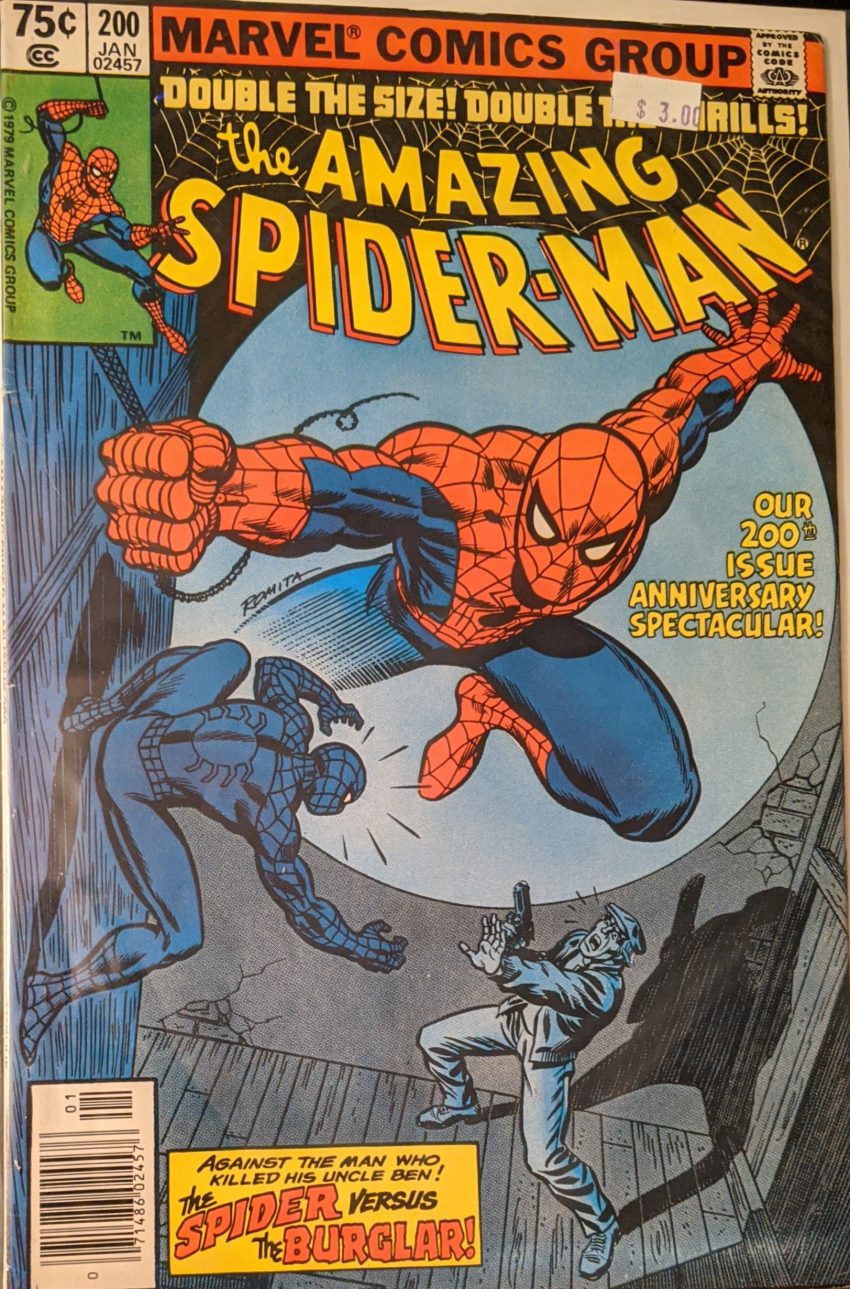 Merry Christmas! What better gift could there be than a cover by Jazzy John Romita? Here’s one I’ve had a very long time, but haven’t actually read in many years. I probably didn’t just pay $3 for it… did I? I don’t remember where I got this one, but I was still a kid, 13 or 15 or something, and it was on a family trip. My folks would indulge this weird habit and let me visit new and exciting comic shops in new cities. Anyway. I feel like Wolfman decided to do this story for #200 a long time ago, and has just sort of been stretching since then. The Kingpin thing and the Mysterio thing were really weak, and it just felt like they happened because this had to be 200 more than to serve the narrative. But 200 is finally here, so let’s check it out.

What? Where’s Mysterio??? I guess Marv Wolfman just decided he didn’t want to mess with him anymore. But he was…. ugh, whatever! Yeah, the tranquilizer somehow made Spider-Man normal. Bout to be real Superman II in here. Or Spider-Man 2, I guess. I will never understand why Sam Raimi did that. ANYWAY! That’s too bad for Spidey. Note the bit saying Stan Less scripted 1 page of this one. Since he has no powers now, Peter walks home 10 miles in the rain, as sullen as you’re supposed to be in those conditions, blaming himself for Aunt May’s seeming death and piggybacking off that to blame himself for Uncle Ben for the millionth time. Meanwhile, The Burglar, still tied up in the basement of the nursing home, cuts his bonds with the broken mirror. He’s decided his best bet at getting the fortune he believes Uncle Ben had is Peter now, so he’s off to find him. Peter is at Aunt May’s house, surveying the damage again. Then he goes to see Aunt Anna next door, who gives him the name of the agency May used to rent the house, and after a weird bit of Komedy Business…

…Peter finally knows who his enemy is, and after helpfully recapping his origin, more or less vows to kill the guy.

My money is currently on this page for Stan Lee. Man, look at that Spider-Man. Keith Pollard! Jim Mooney’s doing his usual Romita bit on all the regular people, but that Spider-Man is all Keith’s own. In a montage, Peter goes into the archives of newspapers and other places looking for info on the Burglar, but his last stop is a TV station based in a skyscraper that won’t let him in.

This sequence really stuck with me as a kid. I don’t know why, really. I mean, great stuff from the art team, but I don’t know. He finally gets in, and is watching the tape he wanted about an old mobster when he hears a commotion outside.

Bit on the nose, isn’t it? He walks back home thinking about how he’s matured, only to find the Burglar has broken into his apartment. He threatens Pete with a gun, but Spider-powers or not, he really had no idea who he was messing with, as Pete lunges for him and puts up a surprisingly good fight until the Burglar is able to recover his gun and hit Pete in the head with it.  He takes Peter’s unconscious form to… the warehouse where Spider-Man caught him the first time…  BIT ON THE NOSE, ISN’T IT???… and ties him up. He tells him the backstory, finally, how a famous Al Capone stand-in called Dutch Mallone used to live in Aunt May’s house and left a treasure there when he got busted (By Elliot Ness, like Al Capone, on tax charges, like Al Capone. Wolfman even has the Burglar say “like Capone.”), and the Burglar shared a cell with him in jail. He learned of the treasure, and that’s why he broken into the house and surprised Uncle Ben all those years ago.

Now… this guy’s a rampaging psychopath. Seems to me, if this is who the character was, he would’ve killed Ben and May and Peter, when he got home, and went about his business. That he ran away scared back then doesn’t really match the guy we’ve been presented over the last several issues, but whatever, I guess. Peter breaks the ropes holding him, switches to Spider-Man and tails him. He jumps from rooftop to rooftop and even holds onto the top of a speeding bus, all without his powers, allegedly. Seems hard to believe. And all while flashing back to his childhood with May & Ben and getting even angrier. The Burglar returns to the nursing home, and Spidey stupidly lets him know he’s being followed. The Burglar runs into the nursing home and down into the basement he was previously tied up in.

But if you think getting shot in the gut is enough to stop a regular man with no super powers, you’re wrong! I guess! But look at the very next page:

Did… did he bring her on the bus? How did that work? Seriously?? Unfortunately, Peter’s not there, having gone to the nursing home and gotten shot and all. Aunt May flashes back to Ben’s last moments…

…and then The Burglar flashes back to how Mysterio faked Aunt May’s death to get rid of Peter. Everyone up to speed now? Now we’re ready for Spider-Man to show up and get to fighting. Yes, bullet in the gut, no powers, Peter leaps around dodging bullets and quipping like normal. He acknowledges to himself that the fight would’ve been over a long time ago if he had his powers, but he’s doing pretty good, I’d say. In the course of the battle, he’s kicked over to Aunt May, still perpetually terrified of Spider-Man.

He’s trying. But then The Burglar is on them, and the battle resumes. After couple pages of slugfest, The Burglar makes the mistake of saying Uncle Ben was a bum and he’s gonna kill Aunt May when he’s done with Spidey. This was not the right tack.

KURUMKK, everybody! This one could also be Stan. In the heat of the moment, the Burglar asks Spider-Man why he cares so much, and Peter whips off his mask. This was the wrong move, as The Burglar becomes 100% convinced Spider-Man is going to kill him, even as the previously bloodlustin’ Spider-Man has decided he 100% doesn’t want to.

That’s nice! Good for her! It really irked me when later writers had May go back to fearing Spider-Man. But that’s in the future.

NO ONE TALKS ABOUT HOW HE GOT SHOT IN THE GUT. Sheesh! That last page could also be Stan. Hey, I looked it up, it is the last page! I seem to recall thinking as a kid that this was a cool looking comic that wasn’t very cool. That seems totally fair. I wish it weren’t so for Spidey’s big 200th issue, but it is what it is. And on that note, we take our leave of the Wolfman/Pollard run and jump back up to the O’Neil/Romita, Jr. run in the early 80s. And we’ll begin with something out of the ordinary.