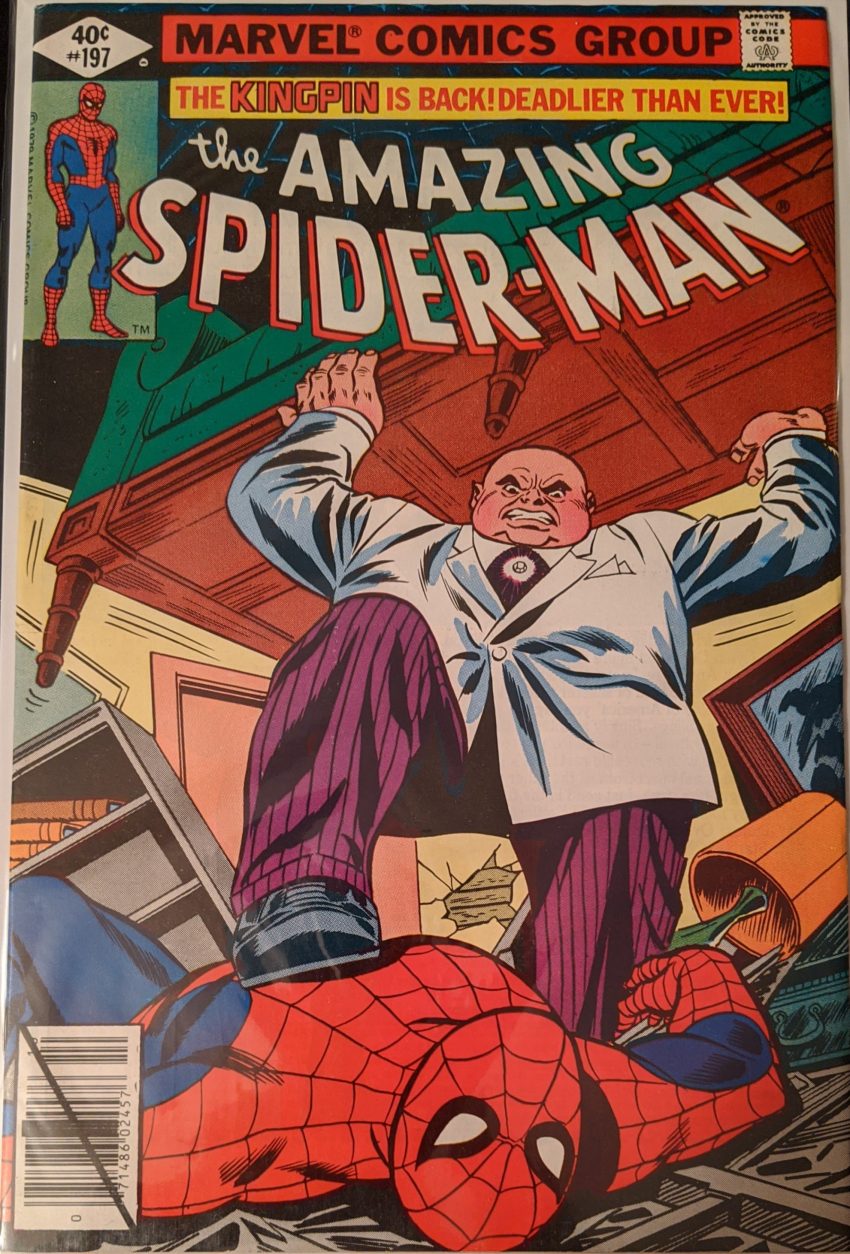 Keith Pollard returns for a knockdown, drag out battle with the Kingpin. First he helpfully explains how he survived seeming death last time he appeared, and explains that the injuries he suffered during said fight left him wandering the streets with amnesia, and then Silvermane tried to have him killed.

Haha, ok. I wonder if anyone’s ever just said Kingpin is a mutant or something. The “solid muscle” thing is so absurd, the least they could do is make it a superpower. Anyway, when he got back to his beloved Vanessa, she gave him 24 hours to leave his life of crime or lose her, so he spent most of it cutting his ties to the underworld and whatnot, but he’s decided to spend his last 6 hours capturing and killing Spider-Man. The rest of the issue is just a huge fight.

Pretty much literally just an issue-long battle, giving Keith Pollard a chance to really go wild as Kingpin and Spider-Man demolish his fancy old house fighting their way through it.

We very briefly cut away to Reinhart and The Burglar, whose relationship is turning sour, but then it’s back to the brawl. Then cut away to check in on Robbie really, truly quitting the Bugle…

JJJ is in a dark place. But, then, back to the fightin’. More and more of Kingpin’s house is destroyed, but Spider-Man always manages to keep from getting killed, in spite of his bad arm.

Kingpin smashes a hole in the floor that Spidey dives into, and that brings the battle into a darkened basement, which an infuriated Kingpin just partially collapses on our hero. Ouch. He crawls free, but he’s running on fumes, and Kingpin is still at full power…

Weirdly sweet! Poor Spidey might be beaten within an inch of his life, but at least somebody got a happy ending. I wonder how long Kingpin was truly out of the crime biz. The internet seems to suggest he really was out of sight for about 2 years, returning when Frank Miller started turning him into a Daredevil villain in DD #170. Well. That was something of a detour. Maybe next issue Spidey can get to the nursing home. But, as you can see, Mysterio is coming, so maybe not.