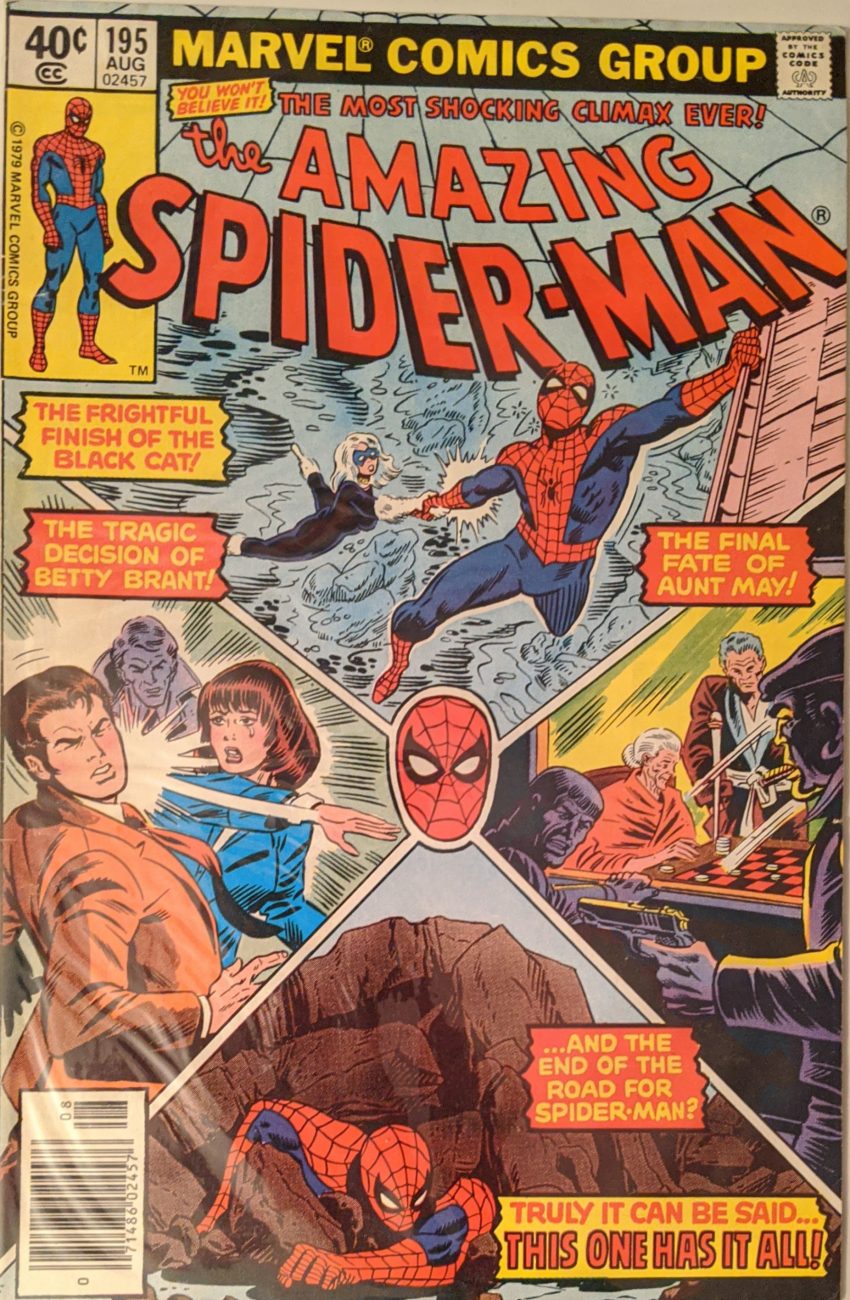 4 different plots AND “the most shocking climax ever?” Sounds worth your 40 cents! This one is inked by “M. Hands.” Like Many hands, ya know?

ENOUGH WE GET IT. Black Cat and her goons begin their escape. BC seems to be implied to have “bad luck” powers again, but nothing concrete is said. Spidey wakes up to find he’s probably broken his arm in the explosion and fall. He does a quick version of the old “Spider-Man must lift a heavy thing” trope and tries to swing home, but almost passes out from the pain. He makes it to his apartment planning to go get help at the school medical department. Does it work like that? Meanwhile, BC dismisses her goons, who are shortly accosted by a large figure who’s probably the Kingpin, announcing they work for him now. Aaaaalright. Not the most thorough hiring process. BC takes the very confused man who is obviously her dad to his old house, and we cut to the ESU grocery store…

Don’t worry, Harry & Flash get in some judging as they go. This is ridiculous, man. What is even going on in this book anymore? Was I supposed to be sad that Peter chose not to keep letting Betty cheat on her husband with him? SPOILERS: I am not! What a terrible storyline. A pretty far cry from Gerry Conway making Ned & Peter best pals, too. At any rate, it’s over now, mercifully, and all that was needed to end it was Peter still being the 70s version of himself and being a total jerk. We check in on Aunt May’s doctor and The Burglar plotting a way to make Peter get out of their way, and then it’s back to BC and Walter Hardy, who she finally tells her real name, Felicia Hardy. She is his daughter, of course, and even though her mom told her her dad died in a plane crash, she found out he was alive and “the greatest cat burglar the world has ever known,” and has spent years learning fighting, gymnastics and stealing stuff so she could break him out of jail and let him die at home, and then carry on his legacy. She leaves her shocked Mom to see her Dad just as Spider-Man shows up outside, already flirting before she’s even seen him.

They have yet another flirty fight, but Felicia is slowly getting irritated, reminding Spidey how she kept a scrapbook of him and saying she was one of the few who trusted him back before his name was cleared, but maybe she was wrong. Well, for a second. As the battle continues, it keeps on being a flirt-fight, but eventually BC kicks Spider-Man in his bad arm and runs for it, sayingto just let her dad die in peace (Not.. an unreasonable position. He knows the guy’s dying, what’s he hoping to accomplish here?).

Spidey looks like he’s wiping a tear away down there even though, you know, that makes no sense. So Felicia pretty canonically had bad luck powers here, in spite of her not having any in future appearances. Pretty weird. Anyhow, Spidey is pretty crushed, and that’s on top of all the other stuff he’s been through in the last 2 issues, so he’s really in no kind of condition for this to happen:

Egads! Aunt May! What an abrupt ending for such a major character! Come back next time as we begin a nonstop race to ASM 200.