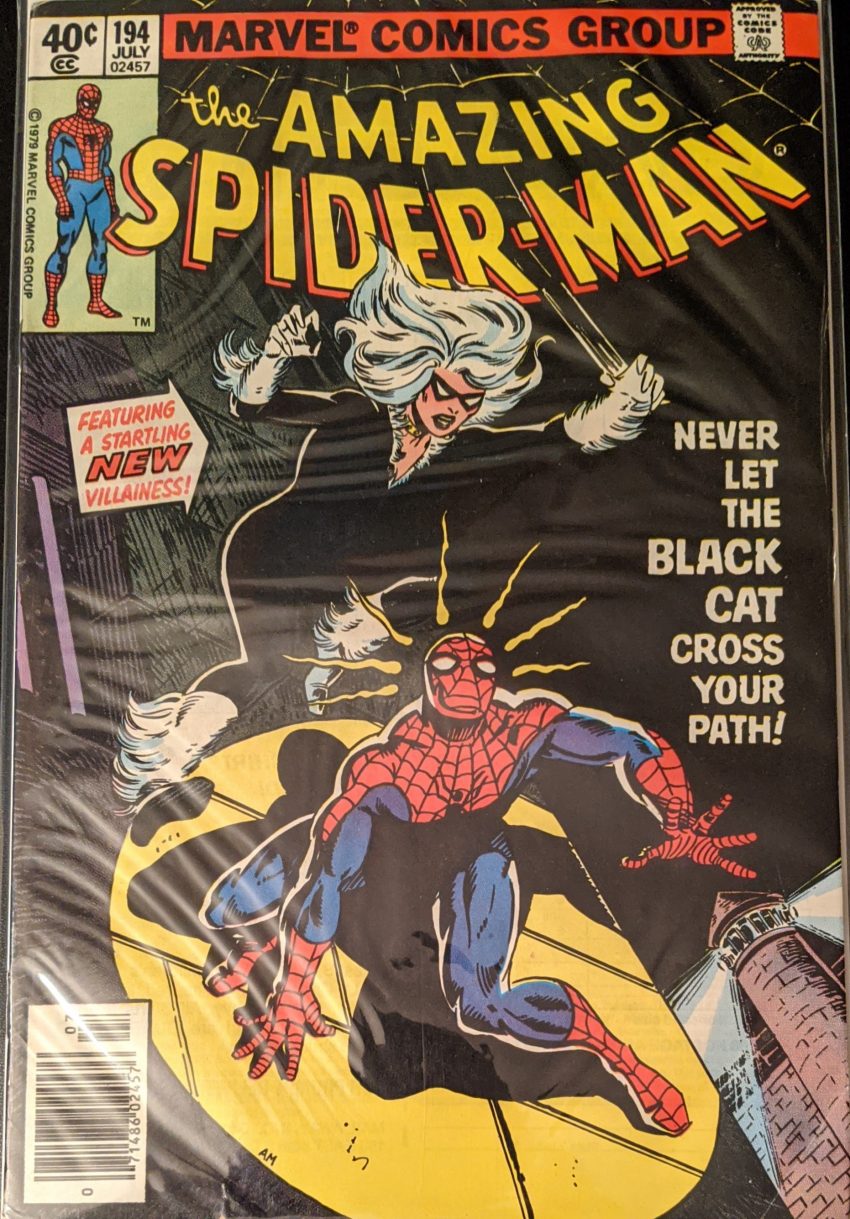 There it is. Right there on the cover. Not even in the story yet and it’s already “never let a black cat cross your path.” Ah, well. Here we are, the momentous introduction of one of Spidey’s most memorable paramours. It may not be what you’re expecting. She’s up to bat right on page 1.

BC beings by helpfully thinking to us how she’s trained for 2 years and is super good at gymnastics and is now ready to begin her criminal career. She breaks into a police station, steals some files, and leaves. The next night, she’s back on the prowl:

DOCTOR BORIS KORPSE! So much thieving and weirdness and it’s only page 6! So, is Felicia mind controlling that guy up there? What else could those glowing eyes mean? At any rate, as Peter leaves the nursing home, he’s watched by the guy who runs the place and the guy who killed Uncle Ben, who seems to have been holding him hostage for… days? What’s the timeline, here? The Burglar seems sure Aunt May knows where something is, something he broke in to steal way back in the first Spidey story, and he’s gonna get it. And the guy from the nursing home, who looks like a goon himself, is thinking he’s going to punish this dude and take whatever he’s trying to get. Nursing homes are wild, as it turns out. Meanwhile, at the Daily Bugle…

Peter is still worried JJJ knows who he is, and that’s not helped by JJJ claiming he has a surprise for Spider-Man, but he then he starts yelling that Spidey is murdering him and Spidey is forced to flee. Glory Grant comes in just in time to see Spidey taking off, JJJ webbed to the ceiling. Spidey swings away, more sure than ever that JJJ looked under his mask and unsure what to do. So he goes to work at his fancy new job.

Peter “maybe I can date every girl I pass by” Parker, ladies & gentlemen.

Date is out and a fight is in. BC handily outmaneuvers Spidey to get him out on the street, and keeps surprising him with her moves. As the battle continues, she gets in the first of way too many “never let a black cat cross your path”s, and seems to display some bad luck powers…

That’s a move the Green Goblin could never pull off, I guess. Their first kiss came pretty early. The next day, Pete manages to be harassed by Ned Leeds and guilted by Harry & Flash for not coming to the party he didn’t know about back in #192 all on his way to work. A news report tips him off that Black Cat stole some files from police headquarters earlier, and the news helpfully names each person the files were about.

They say Spider-Man is an “everyman” character, just like you and me, and that’s a crucial part of his appeal. And just like you and me, which is why 2 women have developed a thing for him in the last 12 hours. Spidey rushes to the prison Walter Hardy is in just in time to interfere in BC’s plan to break him out. They start flirt-fighting some more.

Guys, never let a black cat cross your path. Seriously. It’s important we all know that. Next post, we’ll see how this weird introduction ended. The letter page offers some info about BC’s creation. Turns out Marv Wolfman had the idea for her as an enemy for Spider-Woman, but when he left that book for Spider-Man, he took her with him. It also lets us know she was designed by legendary X-Men artist Dave Cockrum.