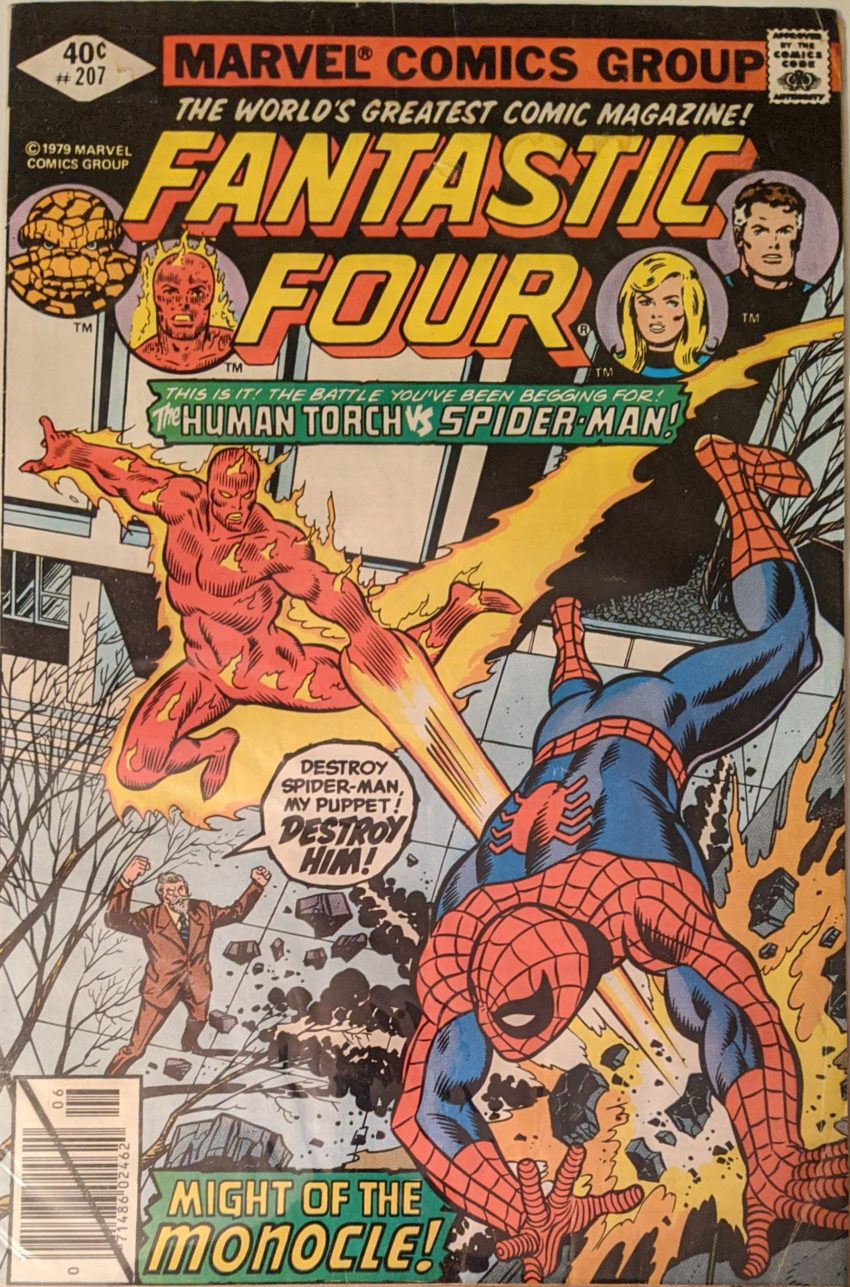 Wait, what? Yeah, this issue of FF is actually important, so I got it when I found out. Marv Wolfman was working on both titles at the same time, you see. He’s joined by Sal Buscema, who is everywhere, and the legendary FF inker Joe Sinnott on this one. Let’s check it out. The issue opens with The Human Torch flying to the Baxter Building at night. In some kind of trance, he burns his way through walls until he finds and takes a folder full of “restricted” weapons concepts in Reed’s lab and flies to Security College, which I guess he is a student at right now (“Security College?”).

THE MONOCLE, y’all. There was a time when I was trying to come up with bad-on-purpose superheroes and villains and making a guy called “The Monocle” was on my list! Someone beat me to it. Anyway, the next day, we see why we’re here:

That’s right, gang: Marv Wolfman had Peter Parker get his new job… in Fantastic Four. That’s crazy! This is a huge status quo change for Spider-Man and it’s in some random issue of FF! And his first job for his new boss is… sneaking into a college. Seems a bit iffy to me. Peter quickly runs into Johnny Storm, who remembers nothing of last night, as ordered. While Johnny doesn’t know Spider-Man’s real identity (yet), he did meet Peter Parker way back in ASM 21, so Peter chats him up, anyway. He confides in Johnny that he’s on a job, and Johnny is cool with it. Johnny is, in fact, nothing but nice to him, but this is 70s Peter Parker, so he’s seething with rage inside at having to act friendly with The Torch for no reason whatsoever. Ugh. Anyway, Johnny takes him to see the science lab. We still haven’t been told why Peter’s here… but The Monocle is currently being chewed out by “Number One,” his boss I guess, for attracting too much attention, and told to dismantle his operation in the school. But he refuses, and quits “The Enclave.”

Aw, that’s rough. Later, The Monocle mobilizes his hypnotized students and, to my surprise, Peter Parker is still there pretending to be a student. He got a dorm room and everything. So he’s the only one not under control tonight. Sensing something is up and finding his room locked from the outside, Peter breaks out through the window in time to see army trucks loading up all the students, so he puts on his work clothes to follow. The kids are taken to a military base, where they start attacking the guards… and the Torch does, too. While Torch is distracting everyone and Spider-Man’s trying to keep them from getting melted, the hypnotized student plant explosives all over the base, then shamble back to their trucks.

That’s a pretty good joke, there. Weird balloon placement, though. Just as he gets the last guys out, the base explodes. Of course there’s a guard blaming him for it, but Spidey just webs that guy up and leaves. Spidey swings back to campus and wakes the Torch, who of course doesn’t remember a thing.

But… did Peter bring two cameras? What? Ok. Regardless, I must say if a supervillain called The Monocle didn’t shoot a laser out of his monocle, I would be super disappointed, so I’m happy to see that bottom business. He has his goons wake up the hypno-kids again. Only this time, The Torch isn’t part of the group. The heroes try to corral the kids without hurting anyone, but then The Monocle shows up and re-hypnotizes Johnny, and you know what that means:

The blow to the head seems to shake Johnny back to normal, but Spidey’s already off, chasing the escaping Monocle, who flees to a ridiculous escape pod that looks like a little cartoon shark.

WHAMMO! And that’s that. I sure hope The FF were able to help Medusa. This was weird! Pretty much a straight up Spider-Man comic, by Spidey’s writer and a frequent Spider-Man artist, guest starring the Torch. How strange. But I originally went from this to ASM 194, where Peter is already a fully salaried employee of The Daily Globe, with a little note saying to check out this issue. That felt awkward, but now I’ve filled in the gap. Comics, everybody! Before we take our leave of this issue, it’s got a Spider-Man Hostess ad in it, so you know we gotta check that out.

I actually remember this one from a comic I had as a child. This may be the first one I ever saw. I love how so many of these ads have brand-new villains in them that are presented as the hero’s “old enemy.” I just accepted at face value that Hotshot was a real thing as a lad.