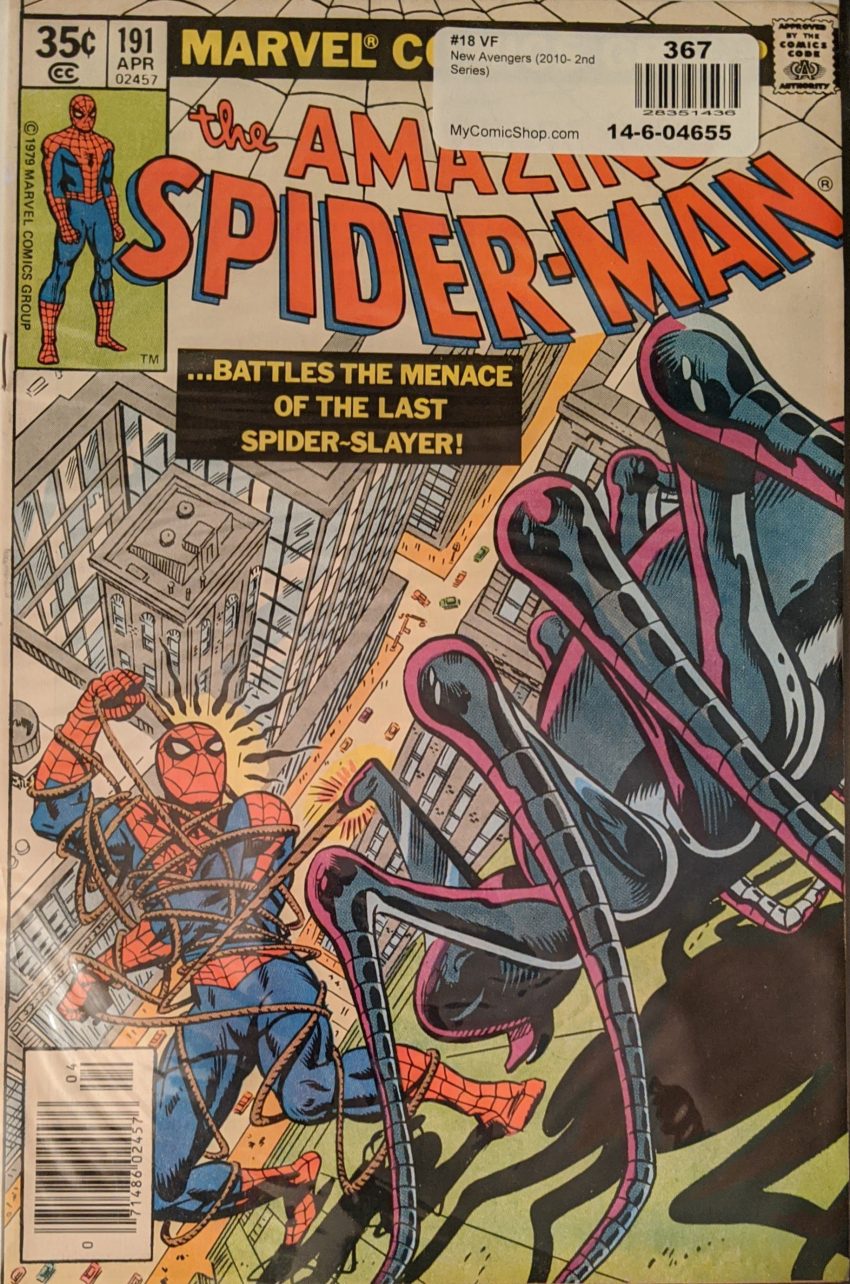 The last Spider-Slayer! Forever! For sure! Keith Pollard & Mike Esposito are back on art as we pick up with JJJ on the rampage. He’s fully convinced Spider-Man killed his son last issue, and he’s doing the only thing he knows: Printing mean editorials. The newspaper stuff in this issue is confusing. JJJ is shown a proof of his headline (“Spider-Man Killer” No colon?), then stomps into Robbie’s office…

But if Robbie won’t run the editorial, what’s with the headline? And who told him it wasn’t running?

Peter thinks this is the perfect way to get Betty to stop coming onto him. “Rather than talk to her like an adult, I’ll just try to date someone else and then she’ll see that and go away! Fool proof!” Pete is kind of a dumb jerk under Marv Wolfman. Robbie finally gets through to him and offers him the gig. He plans to take MJ to the exhibit as the date. Out on the street, after stopping an out of control car from running over an old lady, only to have both driver and old lady turn on him, Spidey learns about JJJ’s “Spider-Man Killer” headline. Because the paper’s already out even though it was being proofed earlier? Is the editorial in there or not? Who knows? Spidey decides to go talk to DA Tower about recourse. And throw a tantrum.

Spider-Man sucks! But we’ll have to get to the mail someone inexplicably sent him care of the police department later, because we have to go watch JJJ stupidly try to get the guy who caused his troubles to help him.

Shades of Gil Kane in that bottom panel. Everyone’s having a great time this issue. Meanwhile, Peter Parker is messing with his web fluid formula. Says he thinks pollutants in the air have been weakening it, so he needs to tweak the formula. While the new batch is setting, he decides to display all his powers to the reader for no reason. Then he gets around to reading the letter.

It kinda sounds like he plans to just go beat the crap out of him, which wouldn’t exactly help his rep. But he can’t, because the Spider-Slayer shows up and quickly webs him to a roof. Certain JJJ sent it, Spidey is only more angry.

Spidey’s bloodlust is getting pretty crazy. After fighting the thing for awhile, it wraps itself around him and then just drops the ground. Spidey barely manages to free himself before the impact, but still hits pretty hard, falling unconscious. Smythe had apparently been following the action from a van, and just pulls up, picks up Spidey, and takes off.

Smythe will have his revenge before he dies! Maybe! Probably not! We’ll see how that goes next time.