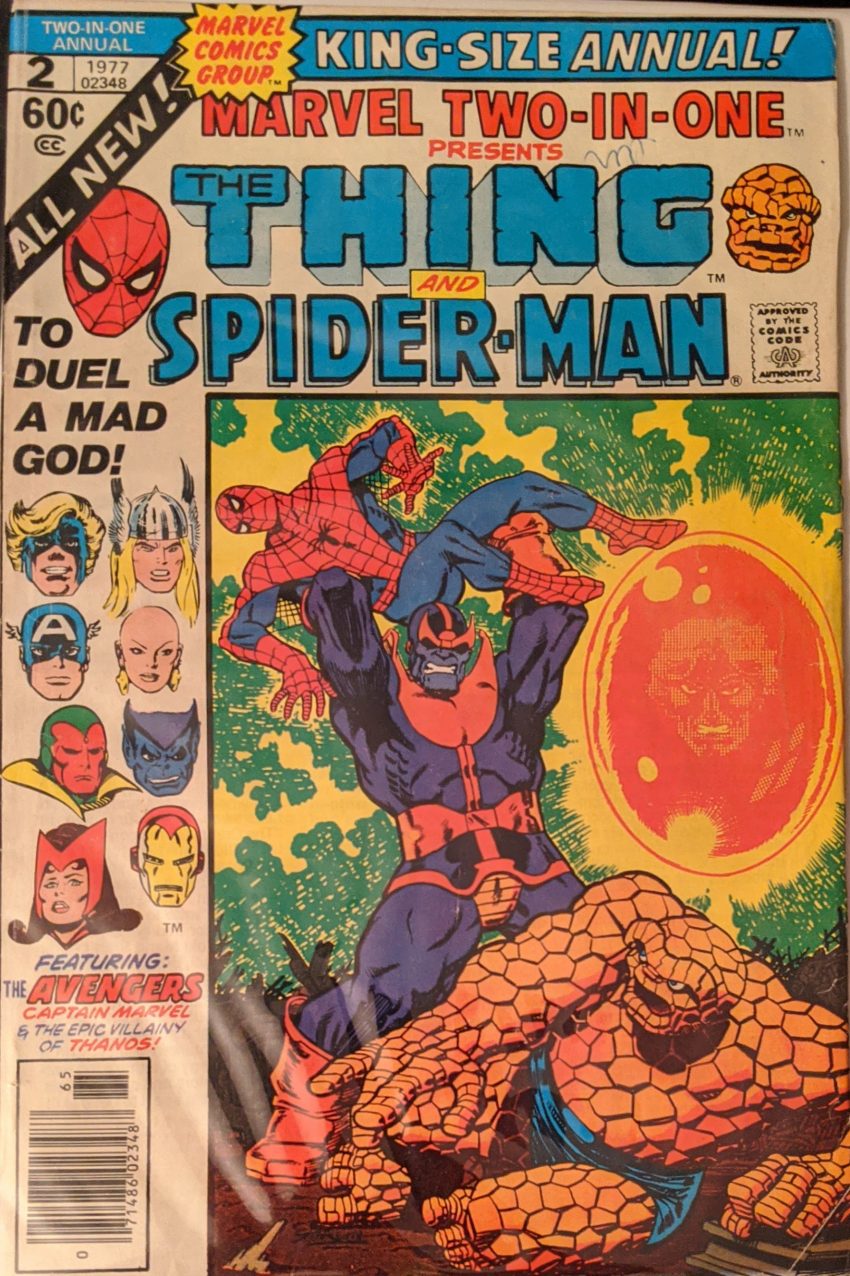 I guess this is the 2nd appearance of Marvel Two-In-One here on the blog? The title which is like Marvel Team-Up, only starring The Thing instead of Spider-Man. But the 2 are naturally going to appear in each other’s comics sometimes, and this is the big one. This is the 2nd part of a famous 2-parter that began in Avengers Annual 7. Spider-Man’s not in that half, but he’s here, and look who’s come with him. Writer/artist Jim Starlin was Marvel’s main cosmic guy in the 70s. He created Thanos and his deal (Cribbed pretty liberally from Jack Kirby’s Fourth World at DC) in Iron Man before continuing it in comics about Captain Marvel and Adam Warlock. All heady, probably drug-fueled, cosmic life & death stuff (It was the 70s!). Thanos has fought The Avengers with The Cosmic Cube (Or The Tesseract if you’re a movie fan), he’s done all sorts of stuff in his various mad quests.

This 2-parter is the big finale of a lot of Starlin’s stuff, and also the first time Thanos ever sought to collect The Infinity Gems. Though instead of making a gauntlet, this time he syphoned off their power and put it all in one giant gem (Why not?), which he intended to use to put out all the stars in the universe as a tribute to his mistress, Death. If you only know Thanos from the movies, you should know in the comics, he’s in love with the personification of death, and everything he does is to please her. In Avengers Annual 7, all this wound up with a giant space armada headed for Earth, with The Avengers, Moondragon, Captain Marvel & Adam Warlock trying to defend it as Thanos tried to put out the sun. Eventually, Thanos’ big gem was shattered by Iron Man, ruining his plan, but not before Warlock sacrificed himself to save everyone (Don’t worry, he got better).

And that brings us, finally, to this issue. All the Avengers seen on the cover are still in the mix, and now we’ll see how The Thing & Spider-Man get roped into this crazy adventure. Still written & pencilled by Starlin, with inks by Joe Rubenstein, it begins with Peter Parker having a nightmare that happens to be all the events of the Avengers Annual. Then his nightmare picks up where that issue left off, with the gem destroyed and Thanos vanished, but the space armada still menacing Earth. And things don’t get better, as Thanos materializes on his command ship, begins directing his previously wild army into a powerful fighting force, and defeats all the Earth heroes.

Out in space, the trippy space elders who sent Warlock into this mess, Lord Order and Master Chaos (Don’t ask)  talk to each other about how Spider-Man and The Thing are their last hope, and then Spidey heads to The Baxter Building. Ben Grimm is reading Salem’s Lot and super into it when Spidey taps him on the head, surprising him so badly he swallows the cigar he was smoking in a weird bit of Komedy Business.

“What have you been smoking? Old tennis shoes?” is an extremely weird thing to say, but I like it. Lucky for our guy, Reed Richards has a new space plane he wants Ben to test pilot “When he gets a chance,” so they take it up, and of course, Spidey’s story checks out. Then the heroes’ ship is caught in a tractor beam and dragged into Thanos’ giant craft. Once inside, they are, of course, attacked by alien goons and monsters.

But then Thanos turns off the gravity, and with a natural disadvantage, Spidey and The Thing are quickly defeated. Back out in space, the weirdos who oppose Death tell each other they never expected Spidey and The Thing to win, they’re just there to release Adam Warlock from his Soul Gem so he can save the day. Uh, sure, ok. When Warlock died in the previous half, his soul was absorbed into the gem, where the souls of some of his friends awaited in a sort of afterlife. Warlock’s having a great time in there, too. Be a shame if he were forced back into the land of the living to fight some more. Back on Thanos’ ship, the boys wake up at the feet of the immobilized Avengers, Thanos bragging about how he beat them and saying he’s going to add Spider-Man and Thing to his trophy collection.

I really miss when Thanos didn’t have eyes, it was a cool look. Hey, have some exposition.

What, no sound effect? Ben gets laid out easily, and Spider-Man, considering that Thanos has been all the Avengers, Captain Marvel and now The Thing, does what most people would do and panics. While this isn’t very heroic, it’s kind of a nice turn. Spidey’s in a terrifying, unwinnable scenario and can’t deal for a bit. He just swings away. But he doesn’t get far before he realizes there’s nowhere to go, and even if he escaped, Thanos is going to ruin life on Earth, so he turns back around. Spidey decides the only one who might be able to take Thanos is Thor, so he decides to try to free The Avengers somehow. Returning to the room where the heroes are trapped, Spidey is dismayed to see Thanos is still there, and with no other choice, he just drops off the ceiling and smashes into the machinery, hurting himself but freeing The Avengers.

Everybody starts mixing it up. Thanos’ goons flood the room and there’s plenty for every Avenger to get up to. While they’re fighting the mob, Thor & The Thing seem to get Thanos on the ropes, but only for a second.

The space weirdos begin forcing Adam Warlock from his paradise in The Soul Gem, but it’s up to Spidey to get him free. Our hero’s Spider Sense starts going nuts, leading him toward the gem.

How ‘bout that? Spidey didn’t save the day, but he was the only one who could get Warlock out to do so. I wonder why Starlin chose Spider-Man to save the world. Maybe just the poetry of Marvel’s most regular hero holding the fate of the planet in his hands. No idea. At any rate, the heroes have a funeral for the now re-dead Adam Warlock, burying him with his friends, Gamora and Pip.

INFINITY, you say??? Now there’s a word Starlin would later become forever associated with. But, impossibly enough, not any time soon. Starlin left the Captain Marvel comic a few years prior to this, and his brief run on Adam Warlock ended with its cancellation a year before this. This is him in 1977, tying up loose ends, and Thanos didn’t get pulled out of mothballs to menace the Marvel Universe again until 1993. He was brought back by Jim Starlin, of course, by then writing a Silver Surfer monthly which quickly spawned The Infinity Gauntlet and its sequels. Since ‘93, Thanos has pretty much been the ultimate evil in the Marvel U, and a no brainer to be the big villain in the movie franchises. Most preposterously, this isn’t the last time he’d wind up frozen as a statue in that pose, even. But for 16 years, he was totally out of the picture, thanks to Spider-Man.