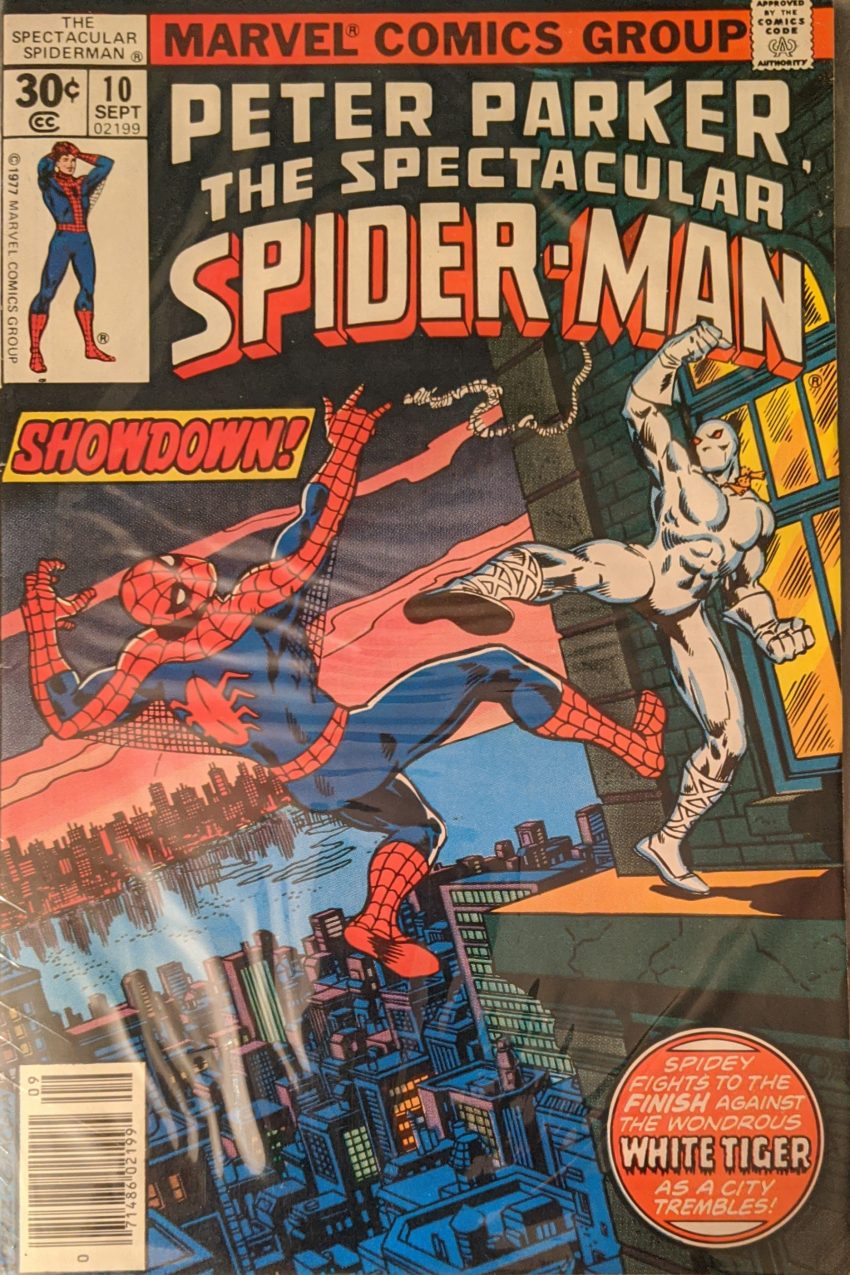 A city trembles! Get a grip, city, it’s just 2 guys kicking each other. Oh, no, this is one of those weird comic bags where instead of a flap taped over, the bag goes all the way up and then just the whole top is folded over. This is like trying to open those produce bags at the grocery store. Frank Giacoia joins Mike Esposito on inks this month as Spidey lunges at The White Tiger for what he thinks was happening last issue.

Spidey recaps his detective work last issue as they beat each other up, and then The White Tiger escapes through the window. Spidey jumps out after him, but…

Near by, the President of the school has called in riot cops and is threatening the protesters when Spidey catches up with White Tiger, who punches him off the side of a building and toward the protesters below.

Awkward dialogue for everyone! We suddenly cut to Detective Blackbyrd, on the trail of the green-suited goons from last issue, who naturally turn out to be a gang from previous White Tiger stories. A whole lot of homework in these issues. Blackbyrd watches them through a skylight for awhile, but then… well, he says it caves in, leaving him no choice but to drop in shooting, but the art looks like he did that on purpose. Then we cut back to our hero(es).

They manage to fight so hard they both accidentally fall off a roof and onto a moving delivery truck, where they keep on fighting on their way to The South Bronx. Sure, ok. Back at ESU, the cops refuse to attack the protesters (This really is fiction!) right a Professor Vasquez appears, saying he stole the book and also impersonated The White Tiger (How he did the scary voice and fought Peter Parker to a standstill is glossed over). Then we zip back to Blackbyrd, pinned down by gunfire in the warehouse, and then his gun jams, as happened to hardboiled detectives so often in the old days.

Spidey starts to finally realize he might’ve messed up, but now White Tiger’s way too mad to just talk, and they keep on fightin’. Until Spidey punches a wall too hard and it begins to collapse on some kids. WT dives in to act as a human shield, but Spidey manages to web the pieces and yank them back, seemingly dropping the wall on himself instead.

I really thought that truck would take the 2 heroes to Blackbyrd’s shoot out. How did he corral all these goons with no gun all by himself?? Why would he bring them all to ESU?? Why did seeing one of his employees steal his beloved Erskine Papers make the President change his mind? What a goofy ending.

Far in the future, in the early years of the 2000s, Hector will be killed off in a very unsatisfactory story in Daredevil, one of the only missteps in an otherwise excellent run by writer Brian Michael Bendis. This paved the way for his niece to become the new White Tiger, with a better suit, but when she didn’t catch on, the amulets found their way to a previously unseen sister of Hector’s, making her the 3rd and current White Tiger. Even though Hector’s whole immediate family dying was a huge plot point in his final 80s appearance, as we have seen. Ah, well. Comics.