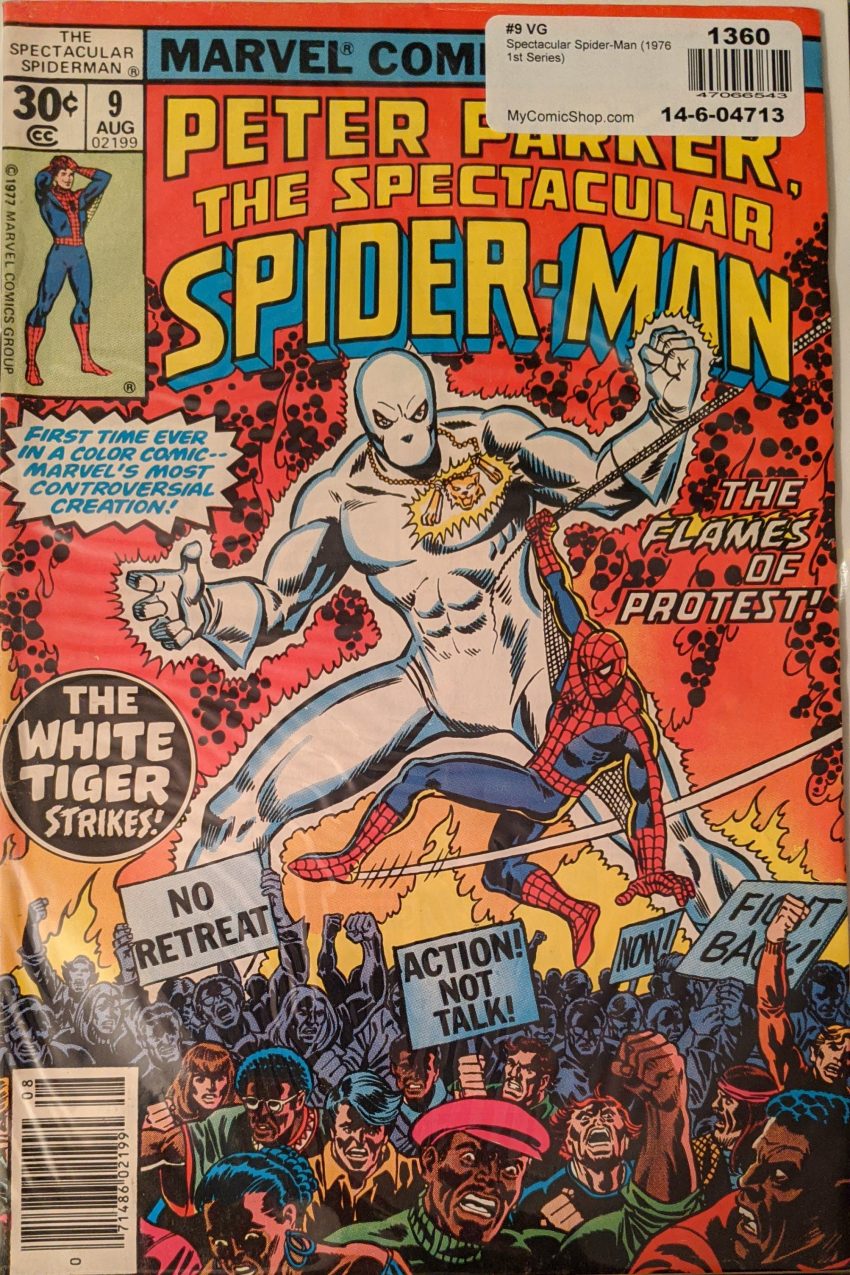 I tried to look up why and how The White Tiger could be “Marvel’s most controversial creation” and came up empty. But he was created by newly-minted TAC writer Bill Mantlo, so it was only a matter of time before he found his way here, probably. One of the all-time boring character designs, this. You couldn’t even give him some stripes? I can only guess this is because he debuted in black and white and fought people in the dark, to make him stand out, but even then… little ears? Stripes? A logo? Claws? Anything? Nothing. He looks like he bought all the pieces to make a superhero costume and forgot to decorate them. Ah, well, here he is. Al the jumping around the timeline has already shown us he’ll become a regular cast member and how he’ll eventually leave the book, but let’s see how he came in, courtesy of Mantlo, Sal Buscema and Mike Esposito. Spider-Man is arriving at ESU just in time to hear the university’s president tell a crowd of protesters that the night school is shutting down no matter what they say.

Well, that’s cool, check out Mantlo going to bat on social issues. We can tell by that “Carajo!” that we’ve just met Hector Ayala, The White Tiger.

Grimly relevant stupidity from the president up there even though this book is 40 years old, as well as grimly relevant “watching and doing nothing” from unnamed extra #2. Soon, a distraught Peter Parker is headed into the library, worried about the future of the school, and soon followed by green-suited goons. All this is watched by Hector, who knows the Erskine Papers are in there, and suits up as The White Tiger to stop the goons.

Well, that’s not what we expected. Peter gets caught off-guard twice by his assailant, and winds up buried under a toppled bookcase with an injured arm. Meanwhile, The White Tiger catches up with the aforementioned green-suited goons and beats them up in short order. But then Peter rushes out, still inexplicably refusing to get into his Spidey suit, and The White Tiger backhands him without looking. Then he’s shocked by seeing hie just hit a regular student, and the goons begin to flee. Then the knocked out guard comes to and accuses WT of beating him up, which he finds confusing since that obviously wasn’t him, and then he flees himself. The college president declares a state of emergency on campus (Can he do that?), and Peter slips away. Soon, Spider-Man breaks into The Daily Globe to read up on The White Tiger so Mantlo can reference his handful of adventures in Deadly Hands of Kung-Fu before Spidey finds a reference to the police detective WT hangs out with.

“Blackbyrd” (Never not awkward!) listens to Spidey, then hails a cab, and he and Spidey head to ESU. En route, Blackbyrd recaps that the Sons of the Tiger, who we saw in MTU awhile ago, split up, and threw away the magic amulets that gave them their power. And that they were found by Hector, who learned that all 3 amulets made him super powerful. Yeah, this guy just tells Spidey The White Tiger’s real name. Then he recaps WT’s past adventures in slightly more detail than the previous recap (Why is this happening twice?), letting Spidey/us know that WT’s battles put him at odds with an evil group that, of course, turned out to be run by his own brother, who was killed.

In this era where Marvel Comics have less than 20 pages of story every month, The White Tiger’s meager backstory sure ate up a lot of them. Meanwhile, White Tiger confronts Professor Vasquez from earlier, who’s just found his office has been tossed and The Erskine Papers are in his desk. White Tiger wants to know what’s up, but also:

Be here next time for what promises to be an entire issue of Two Heroes Over A Misunderstanding!