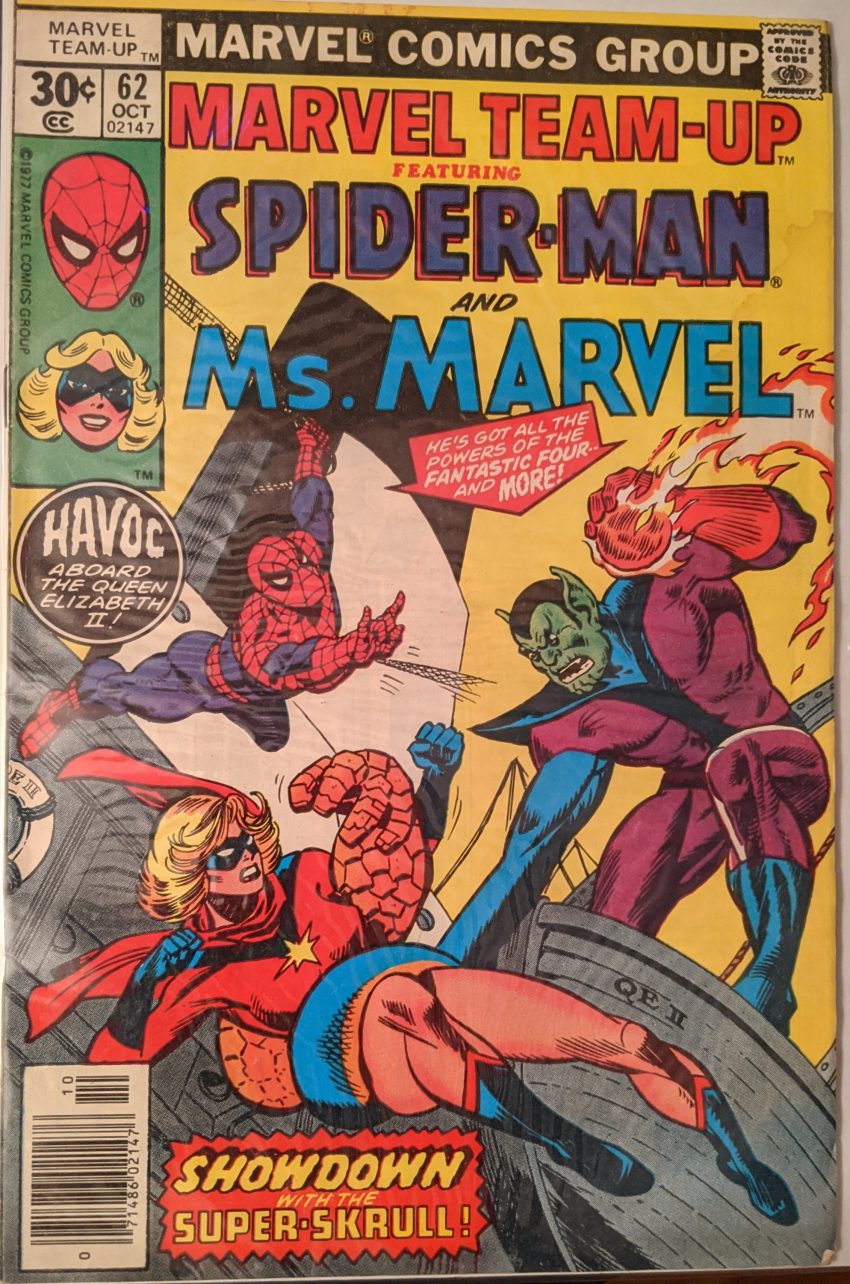 I wonder who was so jazzed about featuring this famous boat. Picking up right where things left off last time, The Super Skrull is really mad and ready to kill Spider-Man. Spidey thinks he’s just keeping SS busy until The Avengers or The FF or somebody can get here, but the assembled cops nearby get the word that no one’s coming. Spidey is on his own. But probably not for long in a comic called Marvel Team-Up. SS shoots a flame burst at Spidey, but it dissipates before it can reach him.

Well, that’s not good. Spiey wakes up a short time later, finding news crews reporting on the battle and Jean DeWolff hoping he’s ok. She says SS burned his way out of there “through the bodies of her men” (Dang), so even though he’s pretty badly roughed up, Spidey immediately snags a passing police helicopter and catches a ride out to sea. To the QEII, I guess, aboard which is Carol Danvers, aka Ms. Marvel, trying to take a vacation. But unfortunately for her, another passenger on the ship is a rare antiques dealer, and The Super Skrull crashes into the side of the boat into his room. There he finds a clay figurine, which he cracks open to reveal a crystal inside. This is what SS has been after the whole time, because…

How does she make her hair do that when she changes? She’s got Farah Fawcett powers. Carol Danvers is a human whose biology was partially rewritten through Shenanigans to make her part Kree and give her the power to fight evil as Ms. Marvel. At least, that’s her origin at this time, and her superhero name at this time. Lots can change in 40 years. Anyway, it’s fightin’ time. Super Skrull is quite familiar with MM’s mentor, Captain Marvel, and they are not friends, so the similarity of their uniforms only makes him madder.

Say, it’s their first meeting! I’d forgotten that. Chris Claremont has a pretty well-deserved rep for being better with female characters than most dudes of his vintage. Having MM be proactive and come up with the plan and all here, and Spidey just follow her lead, is a good example of that. Back on the boat, Super Skrull’s tearing the place apart looking for his crystal when Spider-Man shows up, lets him see that he has it, and swings off, beginning a wild chase. Meanwhile, Ms. Marvel is weaving a grid of cables around the top of the ship to replicate the field that dampened SS’s powers earlier. With a chance to plan for it and the power of the whole cruise ship at her disposal, she figures she can depower him enough for her & Spidey to take him down. And just in time, too, as Spider-Man has led Super Skrull back up to the top decks.

The grid activates, and as planned, it weakens The Super Skrull, But he’s still got plenty of power, and he and Ms. Marvel keep on fighting.

Well! I guess we’ll never know what happened to Carol. She’ll be fine, though. Spidey & Carol wouldn’t have much to do with each other for a long time, mostly meeting in the pages of this very title, but later their time as Avengers eventually made them closer allies. There was a faction in fandom that even wanted them to be a couple. But that’s 40 years from this issue. In my mind, MTU is kind of a lark. It’s almost never a substantial story, but it’s also fun to see Spidey interact with characters from all corners of the Marvel U. These long stories keeping me away from the “real” comics for many issues at a time really try my patience. Next month, we’ll check back in with Spectacular.