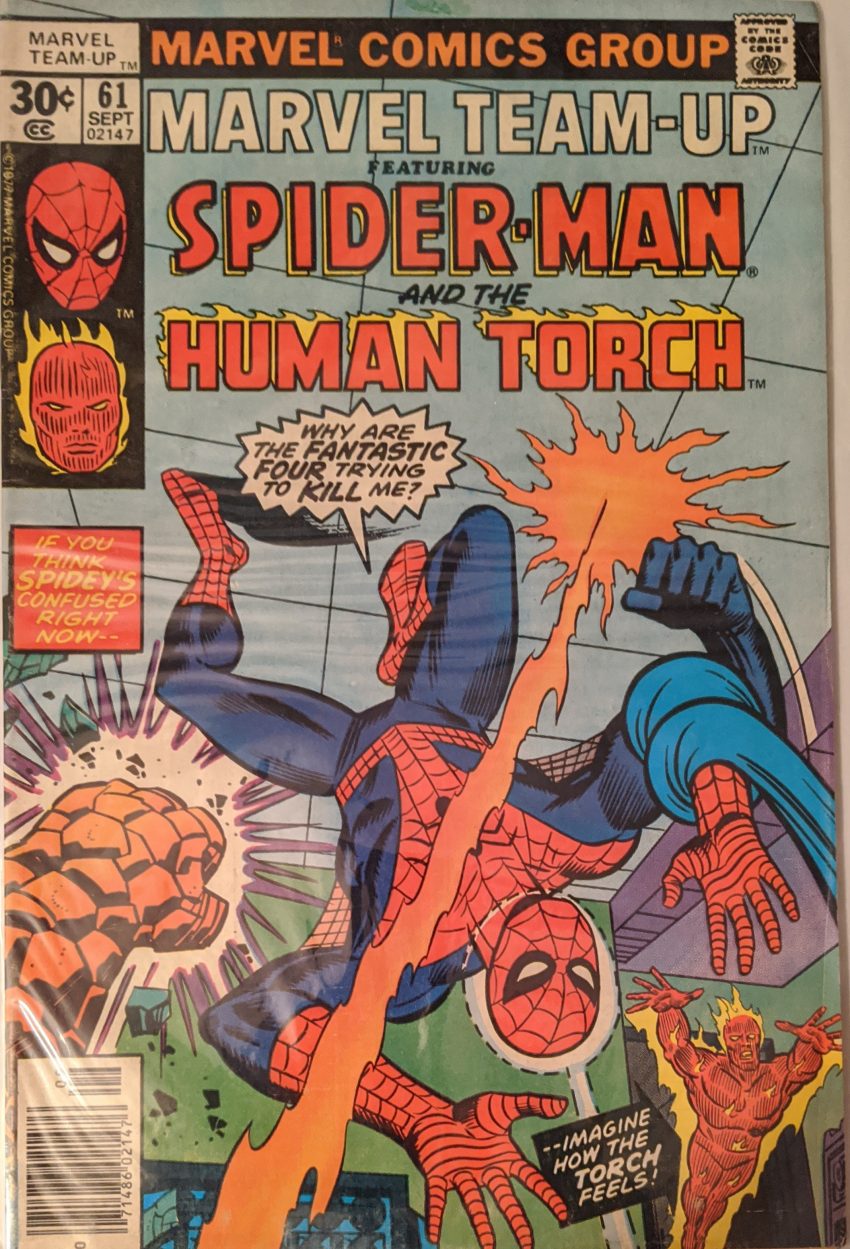 I first read this one and the next one in the Fantastic Four By John Byrne Omnibus, Vol. 1 several years ago. It very thoroughly collected his work with the characters, so this was the oldest material in it. I hadn’t previously read the comics that got us here, though. Let’s see what happens next in The Baxter Building, as Spider-Man prepares to clean up after the events of last issue.

Preposterously, Spidey tells himself out loud that his body is in shock and “nothing seems to work” as he falls to his death. Um, what? But, don’t worry, The Human Torch happens to fly by and grab him in that moment. As Spidey regains control of his limbs, he rather understandably decides to make a break for it, having no idea what’s going on. He shoots some webs down on to a passing roof to lever the unsuspecting Torch down into it, which only makes him mad, and he demands to know what’s up. Spidey tells him he’s tired of being the FF’s punching bag.

Soooooo last issue, during the big brawl, there was a random aside about a glowing stick on the ground. Turns out, that stick is from an adventure of Tigra and Red Wolf in Tigra’s ongoing feature in “Marvel Chillers” at this time, and through various hijinks not really worth recapping, the stick, which is a “soul catcher,” absorbed The FF’s old enemy, The Super Skrull, who can mimic all their powers. Tigra brought the stick to The FF for safe keeping. Now it seems The Super Skrull has gotten loose. As soon as the heroes are done figuring that out, a giant Thing hand comes smashing down, nearly catching them.

He looks a bit deranged. We cut away to Captain Jean DeWolff being told something crazy is happening at The Baxter Building and ordered to go oversee police response there. They get there just in time to see Spidey get punched way off into the sky, and barely survive the fall back down. Two big falls in a single issue, we’re going all out here. His swing to save himself from splattering on the highway just happens to bring him toward DeWolff. While they talk, Spidey notices some nearby power generators and has an idea, asking if the cops can keep SS busy. The SWAT team has some kinda fancy guns allegedly made by Reed Richards, and start shooting ineffectually at the alien. While they do that, Spidey gets The Torch to help him rig up a trap to electrocute their foe.

Oh, I bet she can. Especially since she’s on the cover of next issue. But, that’s for later. Torch and the Skrull continue to battle, but The Skrull finally gets a good hit in, and Johnny plummets to the ground, barely avoiding getting killed. Spidey says his trap is ready, but Johnny and the cops agree this is way more than he can handle alone. Then Johnny passes out, so he doesn’t have much of a choice.

Things looks bad for our hero! But I’m sure Ms. Marvel will save the day next post.