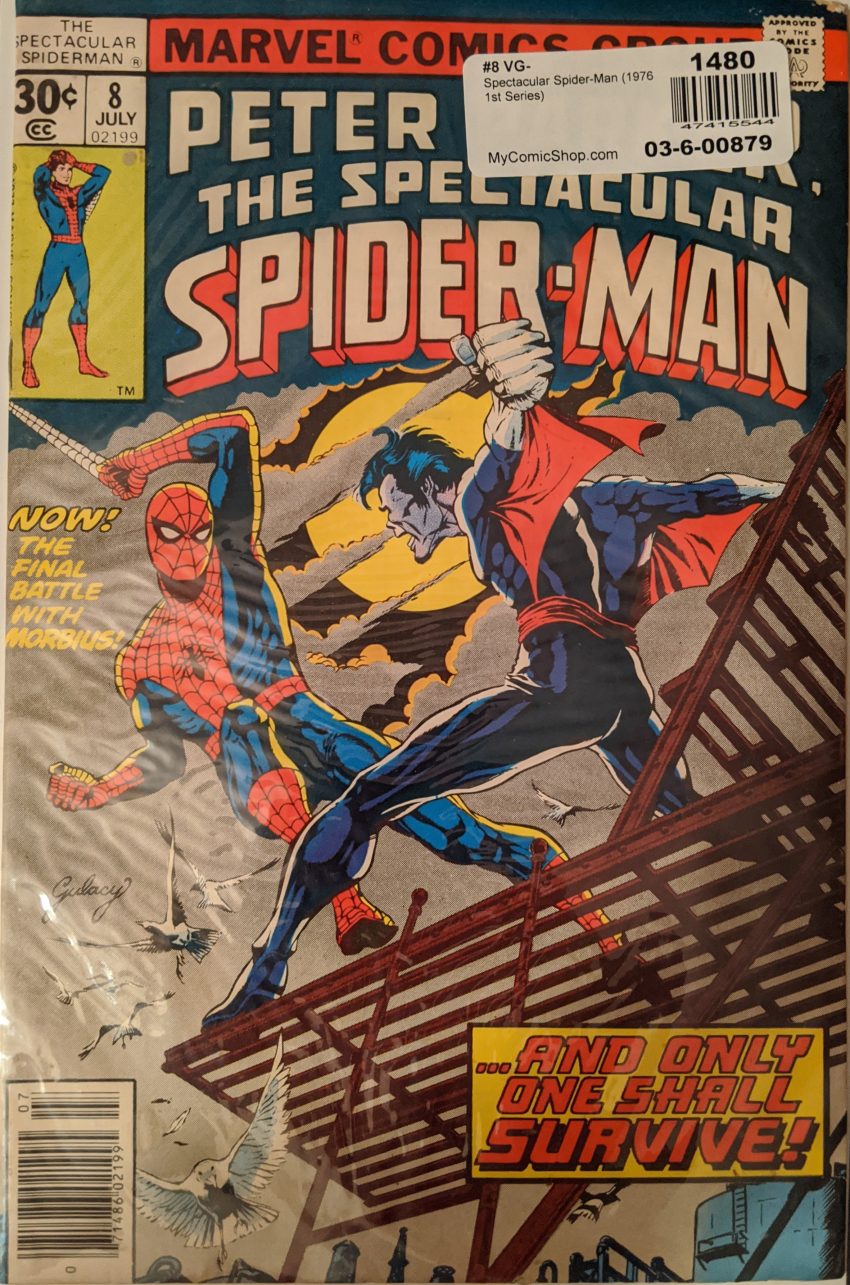 Oh, ok. Gonna be quite the margin of error on that one. Could Paul Gulacy have gotten Spidey’s web any more wrong here? We rejoin the story right where it left off last month. Morbius is compelled to come after Spidey and Glory, and so Spidey pinballs off some buildings to quickly get Glory to ground level so he can focus on giving Morbius the ol’ Buscema Punch:

The reason for Flash’s breaking and entering will prove pretty significant.

As we’ve seen due to all the jumping around, this is not the last Flash will see of Sha Shan. I wondered when and how she came back into the picture. I suppose we’ll find out. But, hey, we got an Empathoid to worry about. Spidey tries to fight it, but punches right through it, and then The Empathoid grabs him up in a bear hug and then vanishes into him. This somehow gives Spidey Morbius’ memories of coming into contact with and being possessed by The Empathoid so we can see how it happened (As exposition goes, it’s better than “Since you’re about to die, I’ll tell you my plan,” I suppose). Through some business or other in Marvel Two-in-One 15, Morbius found himself in another dimension, on an alien planet that seemed bereft of life. But The Empathoid was there. It said it feeds on emotions the way it sensed Morbius feeds on blood, and his conflicted emotions drew it to him. It wanted to possess him and take him back to Earth. Morbius thought it better to die on that planet than terrorize people on Earth, but Empy wasn’t with it and possessed him, anyway. All caught up now, Spidey is under its power. It wants him to fight Morbius so it can enjoy their emotions, but Morbius ran for it during the flashback. It allows Spidey to do the same as the cops come. Morbius feeds on a would-be mugger and Peter repairs his webshooters as we move into the next day. Peter convinces it he needs to sleep so he’ll be ready for Morbius, and then we cut to them running into each other seemingly as soon as Spider-Man leaves his apartment that night.

Morbius follows the truck, and the fight continues into the refinery the truck was driving to. Morbius feels he has to kill The Empathoid before it can use up all life on Earth like it did its own planet. Spidey says he’s considered all this and has his own plan, He disengages from Morbius and rushes away.

The emotions of hundreds of sports fans prove too much for The Empathoid, who freezes up (In Spidey’s body), unable to process it all. This leaves them wide open to a flying tackle from Morbius, knocking them all down onto the football field, which is still part of Spidey’s plan.

MORE THAN ONE SURVIVED! Morbius didn’t even fake die! What a rip off. I’m surprised to learn The Empathoid never appeared in another comic, according to the internet. Seems like the kind of character somebody would dust off again at some point. Is he still in the FF’s storage somewhere? I guess we’ll never know.