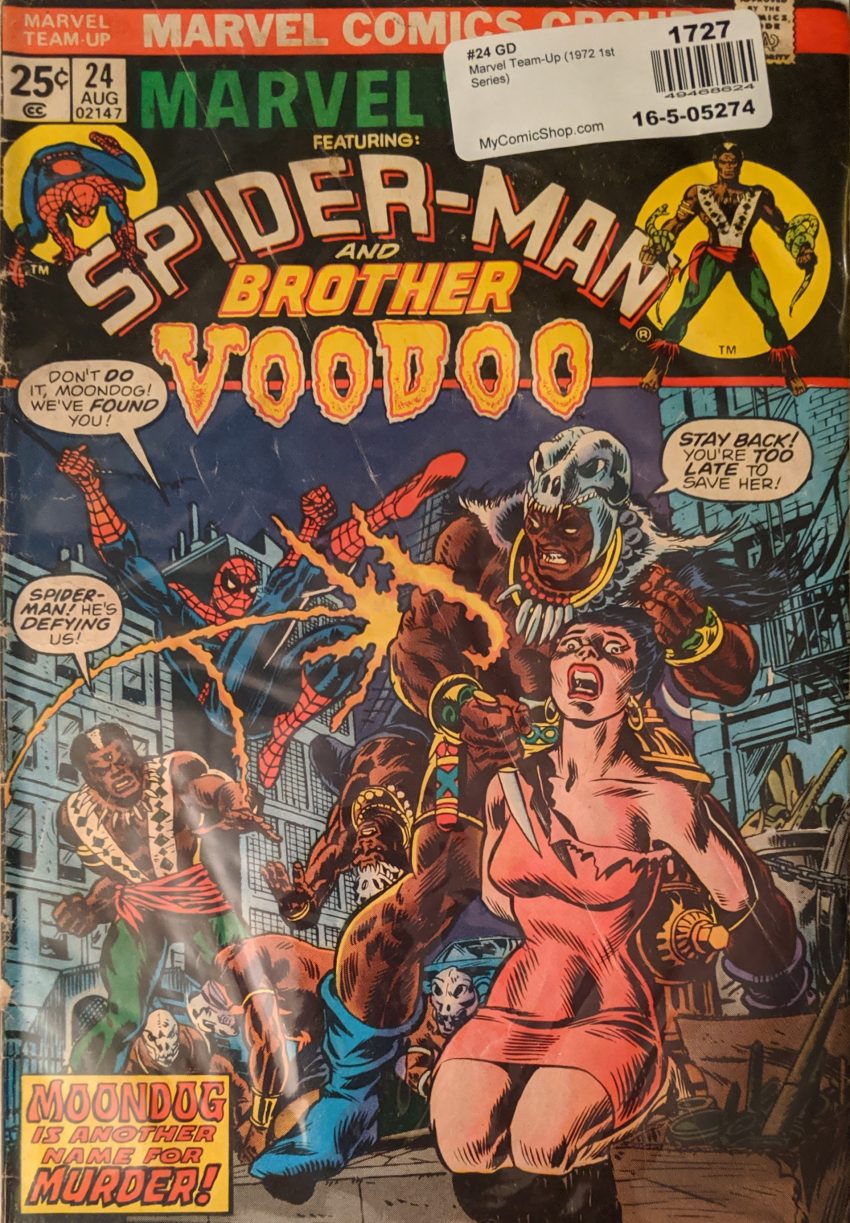 In what culture, sirs, is Moondog another name for murder? This provides a pedigree for the infamous 1990s Captain America cover blurb “MODAM MEANS MURDER!,” I suppose. What’re the odds of getting through this one without getting extremely uncomfortable? Nigh on nonexistant, sez I! Brother Voodoo is one of those weird, weird products of the 70s, part fumbling white dude take on blaxploitation, part horror craze cash-in. Before the judge today, we have Len Wein, Jim Mooney & Sal Trapani. Let’s see how they fare. We open on Spider-Man defacing a billboard of J. Jonah Jameson, drawing glasses and a mustache and whatnot on him. That’s novel. Then he hears a scream.

Already awkward on page 2! Spidey isn’t taking these guys especially seriously until 2 of them casually rip through his webbing, and then they get the better of him, about to stab him to death, when our other star appears.

Guy’s got a lot of jobs. He and Spidey lay into the goons, but one of them throws a knife, missing Spidey and nicking the girl’s arm. As the heroes see to her, the bad guys vanish. After they take her to the hospital, Voodoo tells Spider-Man those goons were servants of Moondog, leader of “a most hedonistic cult” in New Orleans, who escaped Voodoo and has apparently set up shop in New York. But that doesn’t explain why they attacked the girl, so Spidey creeps up into her hospital room.

Brother Voodoo has teleported into the room, you see. Spidey’s pretty rattled by that. And once they decide to go investigate this voodoo play, he’s only more rattled when BV is already there by the time he swings to the theater. As you probably guessed, Moondog is behind the play, for some reason, and seemingly about to sacrifice a girl on stage, which seems like a weird choice until Voodoo tries to stop him, and discovers the whole audience is part of the cult. Then… how is it a play? Is this being advertised? I dunno, man.

But while the heroes fight the mob, Moondog begins to work some magic on them or whatever, and they soon pass out. When they wake up, they’re tied to stakes, still on the stage of a theater (?), and set alight. Spidey is obviously freaking out, but Brother Voodoo is more calm about it as they’re engulfed in flames.

Aaaaaalright, then. He takes down 3 of the goons in one punch (somehow) and then smothers the fire with his cape (somehow, even though it was a blaze taller and wider than the 2 heroes). If he was this powerful the whole time, why was he having such trouble? Also: Spider-Man, is he dead?

Ok, sure, why not? I give up on this one. The fighting continues and Moondog gets away from BV, leading him to his most unusual gag. Instead of sending out his astral form like Dr. Strange, Brother Voodoo can send out the spirit of his dead brother to help him when he’s in trouble. The ghost of Daniel Drumm possesses one of Moondg’s goons, so now there are 3 good guys in this fight. Sort of. Actually, Spider-Man hasn’t appeared for a whole page, I don’t know where he went. Big finish!

Daniel literally didn’t do anything. Ok. All’s well that ends… uh, well? I hope Voodoo helps that poor guy get back to New Orleans. Not the best issue. Meanwhile, in the letter page…

Man, some people. And as you can see, Marvel Value Stamp: Intact! Someone has done math on the back cover of this issue. It’s not in the best shape, so who really cares, but that’s weird.