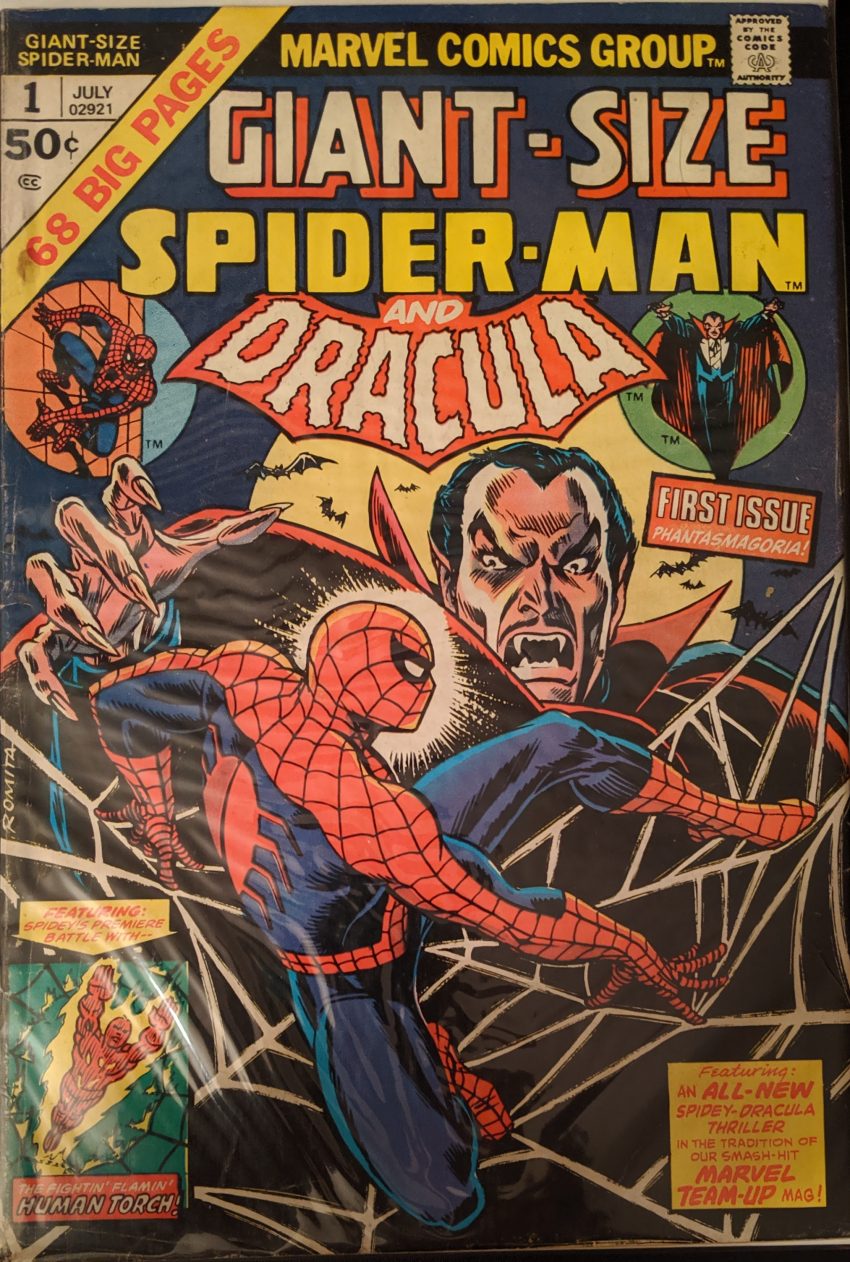 Hot on the heels of Giant-Size Super-Heroes featuring Spider-Man comes Giant-Size Spider-Man, an even larger comic with the same star just a month later! And y’all, it smells TERRIBLE. Holy crap. This is an eBay purchase, and the first time it’s been out of the bag. WHEW. This review might be short for my sake. Dracula! Morbius and a werewolf, then Dracula. It’s crazy that Marvel’s biggest stars in the 70s were Conan and Dracula. Len Wein joins Ross Andru and Don Heck on inks for this one. Oh, man, it smells worse on the inside. This thing has been wet, I think. Oh God. This product is not as advertised. I’ma have to wash my hands after this. I am suffering for YOU, dear reader. And me. Mostly me. But also you.

Our story begins as they often do, with Spider-Man happening upon a jewelry store robbery. Why do people even open jewelry stores in Marvel Manhattan? Spidey charges in, as Andru does a surprisingly modern widescreen page…

…and a shadowy figure attacks. Spidey finds his webbing doesn’t stick to the silent attacker, and then slips on a patch of ice chasing him even though he says it’s 60 degrees out. Having lost the mystery man, Spidey continues on to his destination, and soon Peter Parker is visiting his Aunt May at Anna Watson’s place. I guess this is where he took her after they escaped nuclear destruction? The aftermath of that was strangely glossed over. Aunt May’s really sick, with the flu probably, but doesn’t want Peter to worry. He’s visibly shaken, though, and takes her doctor aside from more info. He says she’s got a new strain of the flu she may not be strong enough to survive, and it’d take a new vaccine to save her. He happens to know it’s being brought to the US by boat with its inventor, one AJ Maxfield, and by the time it gets here, it may be too late. Naturally, Peter isn’t having that, and soon, Spider-Man appears at The Baxter Building, home of the Fantastic Four. He goes to his old pal The Human Torch and begs for a fast vehicle. As it happens, Reed Richards just finished whipping up a new scifi looking airplane.

I don’t have MTU 23 because it’s not a Spider-Man comic, so we’ll never know what happened. Ah, well. Spidey gets to the boat in 15 minutes, wondering why the eccentric Maxfield refuses to fly and won’t part with this life saving vaccine, and that’s when Dracula shows up. He just.. Lands on the boat as a bat.

What a spoooky encounter! So Spidey wants the vaccine, and Dracula wants its maker dead. This sounds complicated. And then we learn that a bunch of goons are on the boat, about to try to kidnap Maxfield and steal the vaccine! This boat is jumpin! Ex-Maggia don Anthony “The Whisperer” Cavelli (he whispers) figures he can trade it for being allowed back into the US, which does not sound plausible at all. They’re gonna try to nab him at a costume ball later on the ship. Elsewhere on deck, Dracula is tired, and finds a young lady to feed on, but his plans are thwarted.

OoooooOOOOOooOOO. Then some of the goons happen upon Dracula, and decide he’s the scientist they’re after, leading to a fight.

He hypnotizes the goons and makes them walk into the sea. That’s cold. Then he happens upon a young woman and gets him some blood. Her scream is heard by Peter Parker, who rushes over to find her unconscious as a bat flies away. This is a very Dracula story all of a sudden. The ship’s Captain is wanting to know where Peter came from, a doctor shows up, and then the guy who took Dracula’s picture runs in, and is identified as Maxfield. The Captain says his name too loud, so the goons come running, and it’s a Spider-Man comic again.

Soon, Spider-Man is on the scene, leading the goons to the deck by webbing up the corridors, making them come out in the open, and when they get up there, they find him waiting for them. Sort of.

It’s a costume party, after all. That’s a good bit.

Spidey manages to deal with the goons in spite of their various machine guns, using his agility and the darkness against them. But once they’re all down, he’s no closer to the vaccine and getting desperate. Meanwhile, Dracula is in the costume ball, looking for Maxfield.

Pseudo-decadence! Cavelli plays sick to get Maxfield to leave the ball with him, and Dracula follows. One of Cavelli’s goons tries to kill Drac,but gets hypnotized for his troubles. Then Dracula catches up with his prey. Cavelli pulls a switchblade on Dracula, Lord of the Vampires, which is pretty funny.

That’s what you get! Drac tells Maxfield that killing people like him will make it easier for vampires to rule the Earth (Um, wut), and then tosses him overboard… where he smacks into Spider-Man, prowling the side of the ship.

Spidey puts the crazed goon down before he can hurt anyone. The doc thanks him for saving his life again, and Spidey brings up the vaccine, only for the doc to say he’s only the ship’s doctor, not AJ Maxfield (Wait, what about the other doctor earlier? What? Whatever). Which leads to…

WHAT?! Spidey didn’t even fight Dracula! What a rip-off! They at least justifies why the girl in the skimpy viking suit has kept showing up, I guess. But still… Spidey never even realized he met Dracula!

An editorial page by Roy Thomas then explains some things about all these new lines of comics, and why Super-Giant Spider-Man didn’t get published. Super what? Apparently, In addition to Giant-Size Marvel Super-Stars featuring the Fantastic Four and Giant-Size Marvel Super-Heroes featuring Spider-Man and Giant-Size Marvel Teams featuring The Defenders and Giant-Size Marvel Chillers featuring Dracula, 35 cent, 48 page comics, there was to be a line of Super-Giant titles that would 100 pages for 60 cents. Super-Giant Spider-Man #1 was solicited with the Dracula story and cover… and then they decided this was getting really confusing, and combined all that mess into 9 Giant-Size titles featuring particular characters that would be 68 pages for 50 cents, starting with this one. And so, here we are. Thomas also explains it was his idea for Spidey and Dracula to sort-of meet, thinking it expressed the weird balance between the burgeoning Marvel superheroes and Marvel horror lines. How fans have been demanding that “Marvels two biggest superstars” meet (The 70s were crazy). How he thinks all the Marvel titles are connected, but not always closely. Ok, I guess.

The rest of the book reprints Strange Tales Annual #2, featuring the first meeting of Spidey & The Human Torch (Always weird to see Kirby draw Spider-Man, in this case inked by Ditko to make it less weird). I might actually do a post on this one day. I don’t own the original, naturally, and it’s a Lee/Kirby/Ditko story. It’s only Spidey’s 4th-ever comic appearance, it counts. But not today, because I am tired of smelling this comic! Yuck!