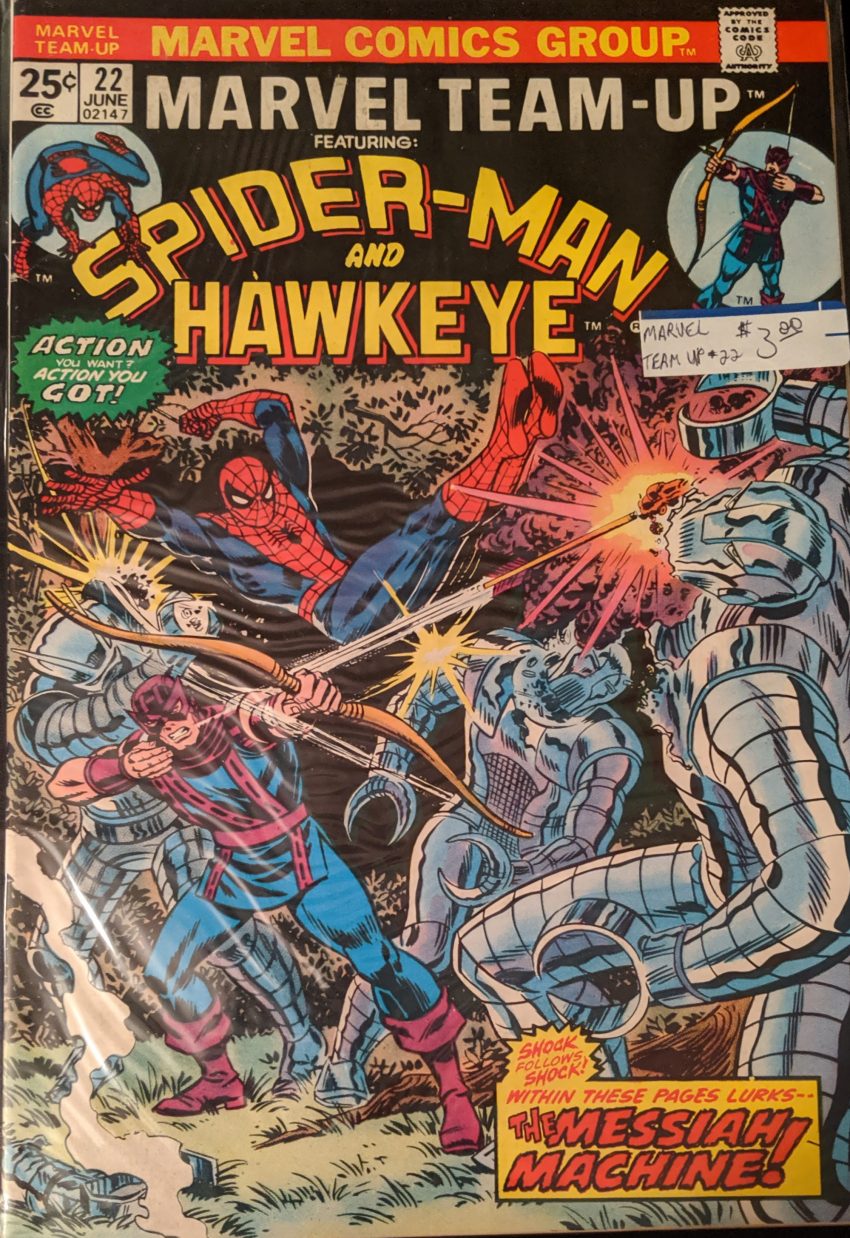 Len Wein, Sal Buscema & Frank Giacoia hang in there from last issue to bring us an adventure of Spider-Man and Hawkeye. And it starts out looking ominous:

Spidey is lost in thought wondering what the return of Liz Allen will mean for his life when an arrow zips through his webline. As he falls, 4 arrows with manacles on the end pin him to a wall. This makes it pretty clear to him who he must be fighting, even if he has no idea why. He frees himself and webs the approaching Hawkeye, who falls right into him.

“Hey, there’s Spider-Man. I could say hello, or I could shoot him down and pin him to a wall. Option 2 it is!” Hawkeye tells Spider-Man he’d been out superheroing, trying to prove he can make it on his own after having recently quit The Avengers, when he tried to stop a stolen electronics truck, and was shocked to find he was fighting robots who looked like identical men. He stowed away on the truck, which went to a Westchester mansion (There are so many Westchester mansions in 70s Spider-Man comics!), which he found full of identical robo-dudes. He snuck in to try to figure out what was happening, but naturally wound up in a fight and barely got out alive.

From there, the scene moves back to the mansion, where, in a lab underground, we find out who our villain is going to be for this outing:

Yeah, Quasimodo. “Quasi-Motivational Destruct Organism.” Look, I don’t make these things up, it’s not my fault. He’s an artificial intelligence created by The Mad Thinker, and it looks like he’s trying to make an army for himself. I am surprised to see Spider-Man has created a device he thinks will prevent the robots from detecting them, but it doesn’t work, and soon it’s fightin’ time. But as the battle moves across the grounds outside…

The web doesn’t stick to the tube, and the heroes soon find themselves in the underground lair of Quasimodo. This was an extremely specific trap. What if there had been 3 heroes, or just one? Anyway, Spider-Man heard Quasimodo died (In Amazing Adventures #14, apparently), but the villain doesn’t like that at all.

Quasimodo explains he is about to turn on a mechanism that will allow him to control all the computers in the world (He’s invented The World Wide Web in 1974!) and then shoots the heroes back up the tubes from whence they came. The tubes are apparently to dispose of “electronic waste.” Robot poop? We shall never know. The heroes are shot out of the tubes and save themselves in their unique fashions (Hawkeye has “retro-rocket” arrows and a parachute arrow. Uh-huh). They go right back down the tubes, this time causing them to explode, and soon are fighting robots again.

Hawkeye’s crazy trickshot ends by embedding itself in the control console, and all the robots it roped up get zapped to death.

And so ends the tale of Quasimodo. I mean, for the moment. And what’s this about “Super-Giant Spider-Man?” We’ll have to find out later.