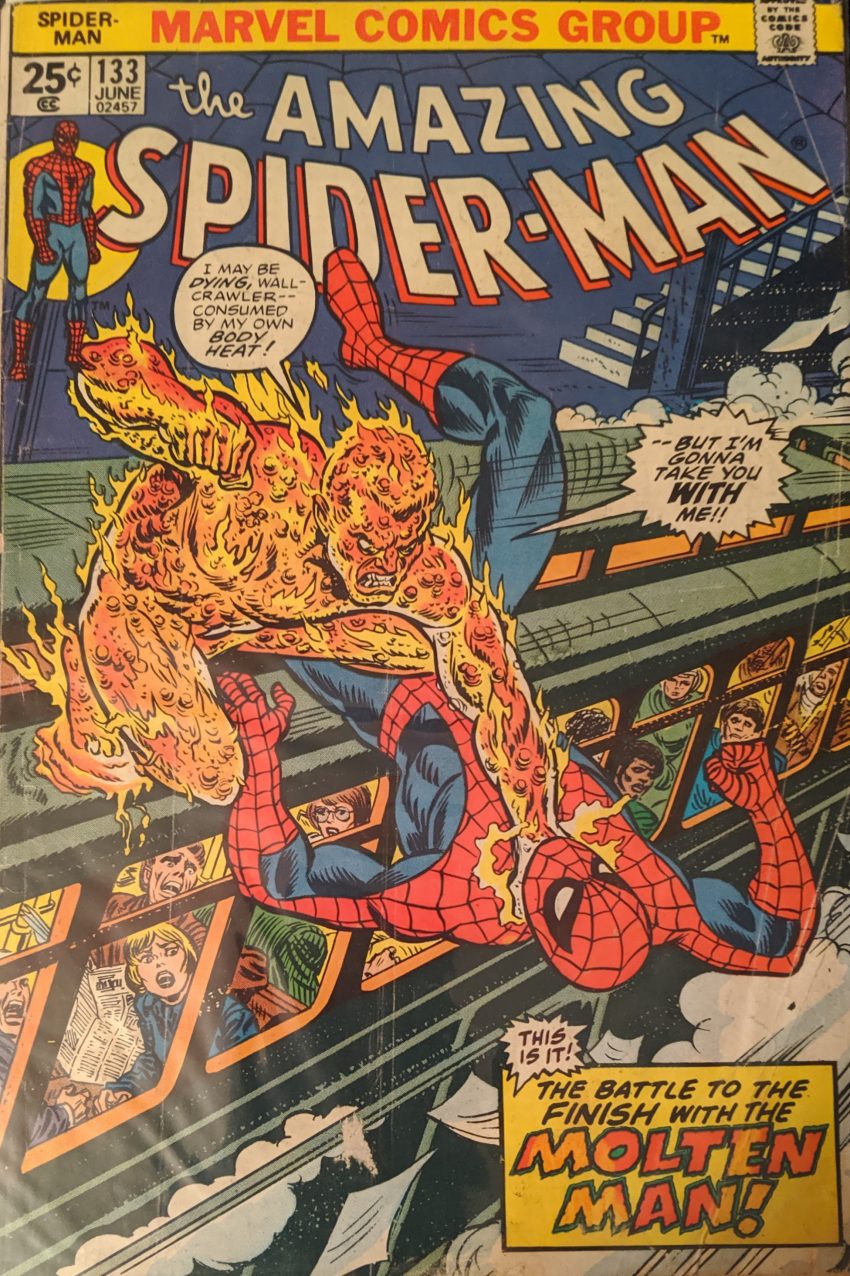 Well, that cover dialogue sure ups the ante, doesn’t it? Ross Andru, Frank Giacoia & Dave Hunt are back on art duties for part two of this one, which begins with Molten Man smashes through the wall of the hospital looking for Ned! He rampages through the place looking for Ned, while a doctor finds Peter unconscious in the hallway. He’s opening his shirt to examine him when he hears the screams from the rampage. He came that close to finding out who Spider-Man is. Lucky for Peter, he wakes up soon after the doctor rushes off. He’s still pretty messed up, but switches to Spider-Man, anyway, to go try to stop The Molten Man.

Molten Man gets tired of this and just burns his way through the wall and runs off. And as the steam clears, Spidey finds himself surrounded by police.

But he sees no sign of Raxton outside, so he swings back to Ned’s room hoping for a clue. Ned is still delirious and babbling about chemicals and glowing rocks. Spidey doesn’t know what to do with that, so he swings back over to Mary Jane’s place to check on her & Liz… and just lets himself in a window. What… is the plan, here? “Hi, I’m already in your house, how’s it going?” He ends up just eavesdropping on them from a dark room like a real weirdo. Liz is telling MJ where she’s been in the last hundred-odd issues. Turns out, Liz went with her step-brother, who happens to be The Molten Man if you don’t know, after the last time Spider-Man caught him, and took a job as a nurse to try to help him. As we’ve seen, Raxton is a super nice dude, so he lashed out at Liz and threatened her physically. So she left, and now she blames herself for his current rampage. She says he’ll die if he goes too long without his medication. Spider-Man feels like he’s heard enough, so he… switches to regular clothes, goes back out the window, crawls IN the window of the apartment next door, and gets his pant leg chewed up by a dog before coming into MJ’s place the normal way. Like you do.

Ned is doing well enough to tell Peter that he found The Molten Man by accident, and that whatever he was doing involved radioactive isotopes. Peter figures that must be what was stolen here, and by whom, so when the workers at the site go on lunch, Spider-Man sneaks inHe finds they’ve been storing radioactive isotopes ordered by local hospitals here, and then, in a pretty funny bit, he gets discovered by the cops because of his bad habit of narrating everything he does out loud.

Most superheroes talked to themselves a lot in this era, so it’s funny to see it become a plot point. Spidey catches up to MM in an unusual-for-the-period splash page action shot, and then it’s fightin’ time. Well, sort of.

Why isn’t his bag burning, tho? MM puts on “fire proof clothing and an asbestos mask” to blend into the crowd (Bad call,Mark!) and gets on a subway train. Spidey hears the uproar as Raxton forces his way on the train without paying and follows.

Raxton literally says “Everything bad that’s ever happened to me is because of YOU!” just in case you hadn’t noticed he’s crazy yet, and then he pushes them both off the train onto a bridge. He says he’s dissolving, and he hoped to cure himself with all the stuff he stole, but Spider-Man stopped him and now he’s going to die. Which, you know, if true, does kinda make Spidey a jerk here, theft or not, something Spider-Man seems to think, also. But when he offers to help MM if he stops fighting, his response is MM grabbing him by the ankle and throwing him into a steel beam. Our man’s in bad shape now. His leg is burned and he can’t really get up.

What did he think was gonna happen there? Spidey does some dumb things sometimes. Maybe he know they were on the last page. And with that, The Molten Man is dead, and we’ll certainly never see him again. Certainly not exactly 40 issues from now. No, sir. And guess what, Marvel Value Stamp fans: This issue’s is safe & sound.