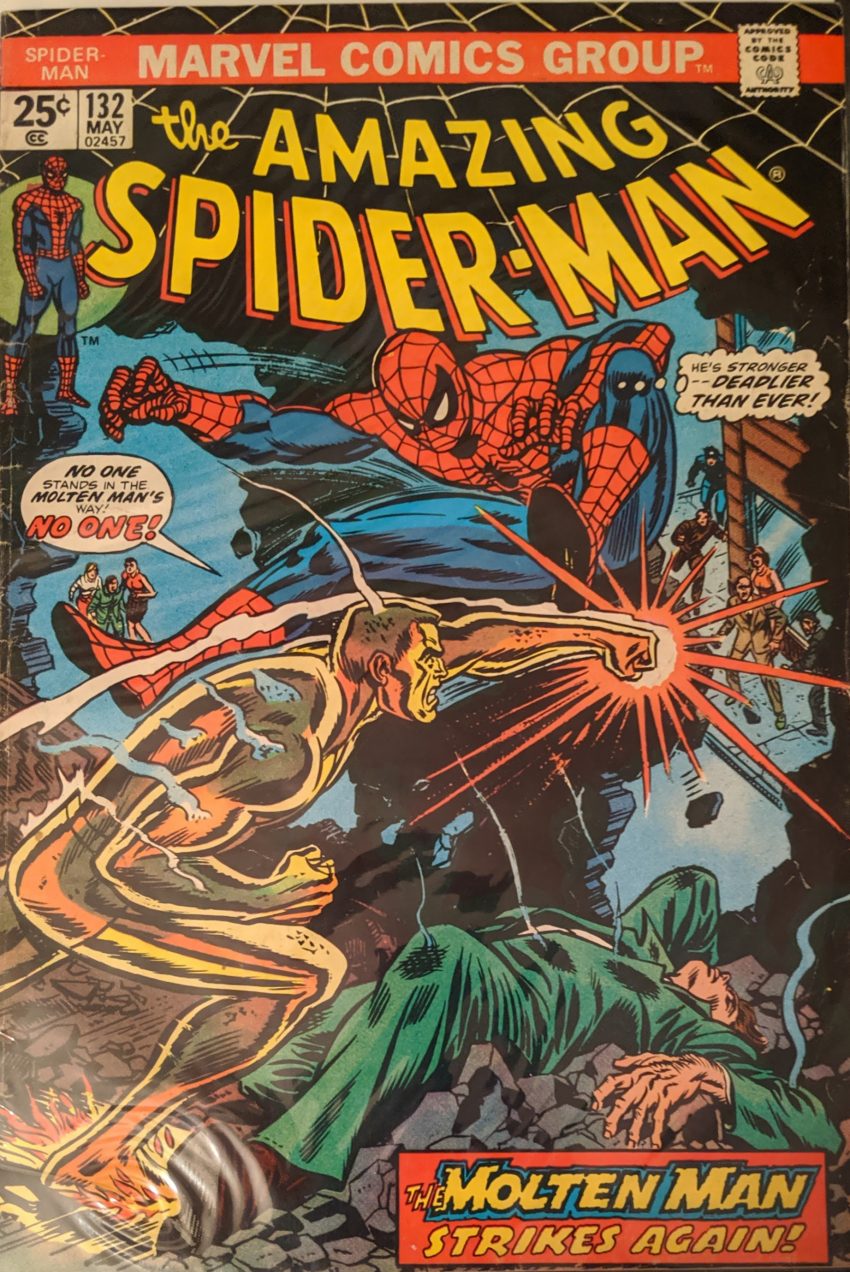 Beginning a Molten Man 2-parter with a script by Gerry Conway, surprise pencils by John Romita, and inks by Paul Reinman & Tony Mortellaro. Romita is Marvel’s Art Director by the time this comes out, designing new characters (Like the Punisher) and doing a lot more behind the scenes work. Still frequently supplying covers to this and other books, but I didn’t expect more interiors. I will never say no to more Romita art, though. Hey, let’s see how it goes.

It’s a chilly winter night, and Spider-Man swings around thinking he’s got a cold. He casually mentions he’s “gotten things worked out with Aunt May” and that’s it. I would very much like to know how that went. An old lady who was all set to marry someone gets caught in the middle of 2 warzones and rescued by someone she’s afraid of, and we don’t even get to see what happened next. Anyway, as he swings by The Museum of Natural History, he notices a couple of cops looking at something. There’s been a break in. Or, more accurately a break out. The cops think the window’s been smashed from the inside, and Spidey discovers a skylight on the roof has been smashed in. And it has scorch marks on it. The cops find that some meteors were stolen, and Spider-Man follows some molten footprints. Spidey’s pretty sure he knows who did this…

Spidey takes off, and soon switches to Peter Parker. As he can’t escape the feeling of being watched in his own room anymore, he’s begun changing in alleys. This means he’s just walking home when he’s approached by a woman on the street. But before we can see who she is, we cut away to a guy yelling at a maid in a crappy hotel room.

Why, it just so happens we’ve seen ASM 30, what luck. Hard to believe such a big name in the Spider-Canon has been gone for over 100 issues, but bringing back long-absent faces is one of Conway’s signature moves, and a welcome one.

Sure has, MJ. In fact, it’s been so long that there’s no reason for you to even know who this is! And yet, she sure seems to, doesn’t she? Whoops! So long that Peter flashes back to their brief history because there’s every chance a reader of this issue wouldn’t know about it. MJ says she’ll take care of Liz and Peter can check in with her tomorrow. Pretty nice of her to take in this random lady. Meanwhile, at the Daily Bugle, Ned Leeds gets a call from a landlady claiming to have a thief living in her building. When he goes down there to investigate, there’s a huge explosion! Her tenant was Mark Raxton, The Molten Man, and he stumbles out of the explosion saying he’s failed and he’ll never be normal again. Ned rushes in to find the owner unconscious, and an irate Molten Man recognizing him from off-panel. At the same time, Peter Parker has stopped by the Bugle, and Robbie sends him to get some photos for Ned. So, soon enough, Spider-Man is on the scene. He finds Ned unconscious and alone.

Brak! Molten Man hasn’t been seen since ASM 35 (We’ll get there one day). Two deep pulls in the same issue by Conway. Raxton says he’s evolved since his last appearance way back when. That his molten covering is now part of his skin. During the ensuing fight, which is mostly just Spidey dodging, Raxton rants a whole lot about how Spider-Man has to die for his interference and whatnot. Real old timey supervillain rambles. Then he falls out of the hole in the wall.

He hits a fire hydrant, and since he’s 300 degrees (as he mentioned in his rants), that causes a huge cloud of steam that lets him escape. Spidey doesn’t even try to follow, as he thinks he better get Ned to the hospital (He has seemingly forgotten the landlady). At the hospital, he puts his unconscious coworker down long enough to switch to regular clothes, noting that he doesn’t feel too well, either, and then rushes him inside.

Conway did this weird thing throughout this issue telling you what part of the story you were on. “This is the prologue…” “Now it’s Act one.” “You’ve just seen Scene One of Act Two…” I don’t know why you would do this. Maybe narrating comics gets old and you have to entertain yourself. Also: Marvel Value Stamp intact!