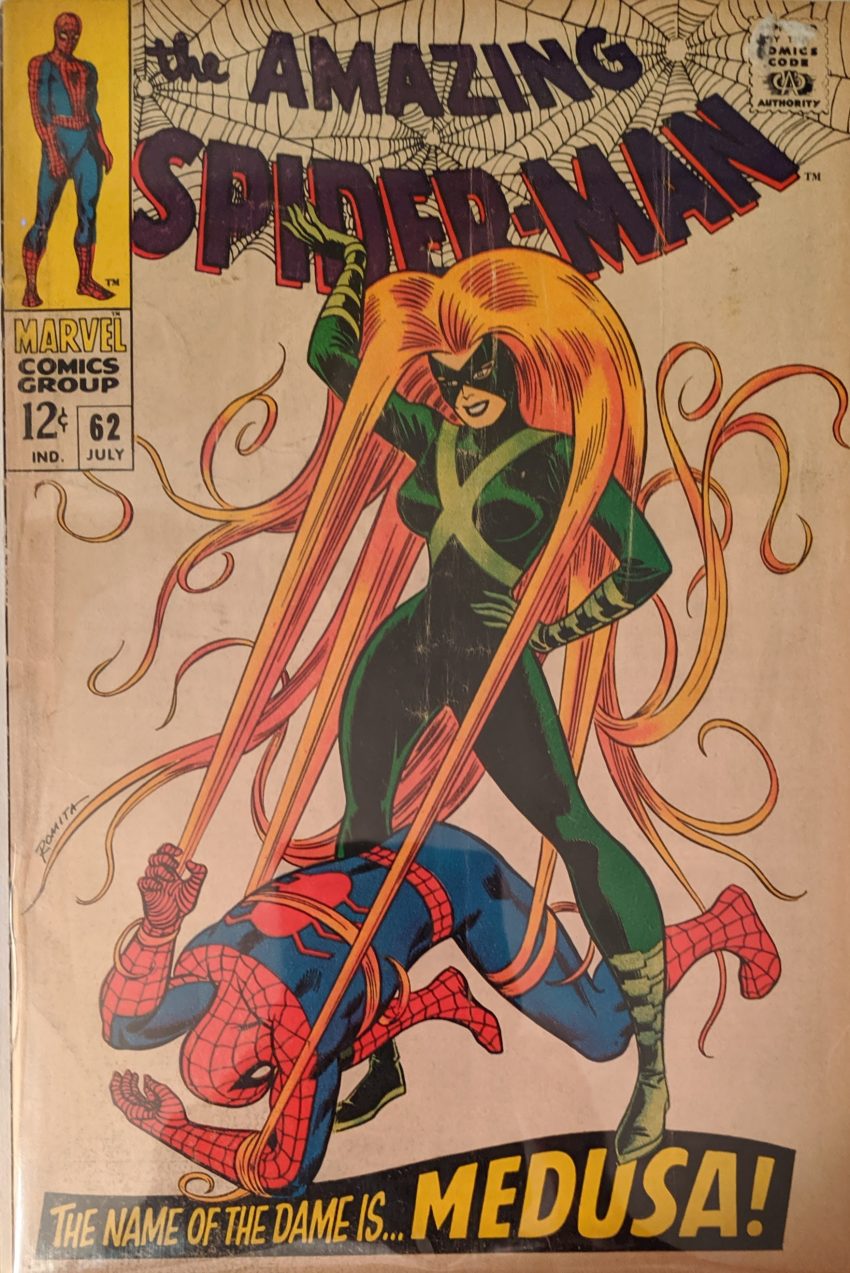 It almost seems like they’re obfuscating Don Heck’s role deliberately. And in light of the battle over credit that’s going to drive Jack Kirby to quit the company about a year from here, John Romita getting a credit that rather indicates he co-wrote the issue probably isn’t helping. The artist essentially did write the issue in these days. From a loose verbal description of what should happen (Or from nothing at all, in the case of Steve Ditko and often Kirby in their later years with the company), the artist would layout the pages, coming up with the pacing, adding scenes, coming up with most or all of the plot beats. Stan would then write the dialogue. But most Marvel comics credited him as “writer” and the penciler as “artist.” Here, Romita is “just” doing layouts. He’s plotting the book, and pretty much receiving a co-writer credit. Which is what Kirby was after, and only occasionally got. Awkward. At any rate, our hero is falling out of the sky.

Medusa decides Spider-Man doesn’t count as a regular person and just leaves. And he’s cool with that, he’d rather spend his time trying to go smooth things over with Gwen. But while he swings off to do that, we turn our attention to a couple of guys watching Medusa fly by out the window. They are apparently bigwigs at a cosmetics company, and the boss man, Montgomery G. Bliss, decides Medusa should be the face of the campaign for their new hair spray. Really. We’re doing this. Outside, Medusa descends to the street to see what people think of her, and they let her know by running in terror. But when she saves a kid from the stampede, everyone calms down. She says she’s come in peace and just wants to walk among them.

The drama! The goofiness! These plotlines do not compliment each other too well. Medusa says her word is her bond and they’re off to set up an ad campaign. Meanwhile, at the fancy rich people club he’s a member of, J. Jonah Jameson gets a call to tell him about the Medusa thing earlier, and he’s furious none of his photographers were on the scene. He’s ranting at Norman Osborn, who does not care.

Does something this aggressive even count as foreshadowing? Norman keeps remembering The Goblin confronting an unmasked Spider-Man, but he can’t see his face. He thinks he’s going mad. Sort of! We check in on Peter Parker arriving home and talking to Harry about his troubles with Gwen, and then it’s back to Medusa, who’s bored with being a hair model and walks out on her new bosses. That Montgomery G. Bliss guy is furious, saying “Nobody walks out on a Heavenly Hair Spray campaign!” which is just hilarious, and then gets to plotting on how to salvage this fiasco. And as luck would have it…

Spidey is tricked into going after Medusa, though he’s not sold on the whole thing. Then we get this positively incredible panel:

This is so silly. I kinda love it. Spidey catches up to Medusa, she’s annoyed by him, and it’s fightin’ time. And as they tangle (Literally, for once), Bliss and his guys are watching, cameras rolling, somehow thinking this will make a good hair commercial.

The two heroes battle across the rooftops, and Medusa finally gets mad enough to start ripping up chimneys and throwing them at Spidey because he’s attacked her for no reason, which makes him begin to think something’s wrong, but he’s in it now, so he keeps going.

Straight silliness from beginning to end! This was almost more like the wacky DC Comics of its day. Returning to the topic of credit, back in the letter pages, most fans keep praising Romita for drawing the book even though Don Heck is doing the finished pencils in the issues they write about, but not this guy…

Hey, the Spectacular Spider-Man magazine. There’s a post about the first of those coming up… tomorrow!