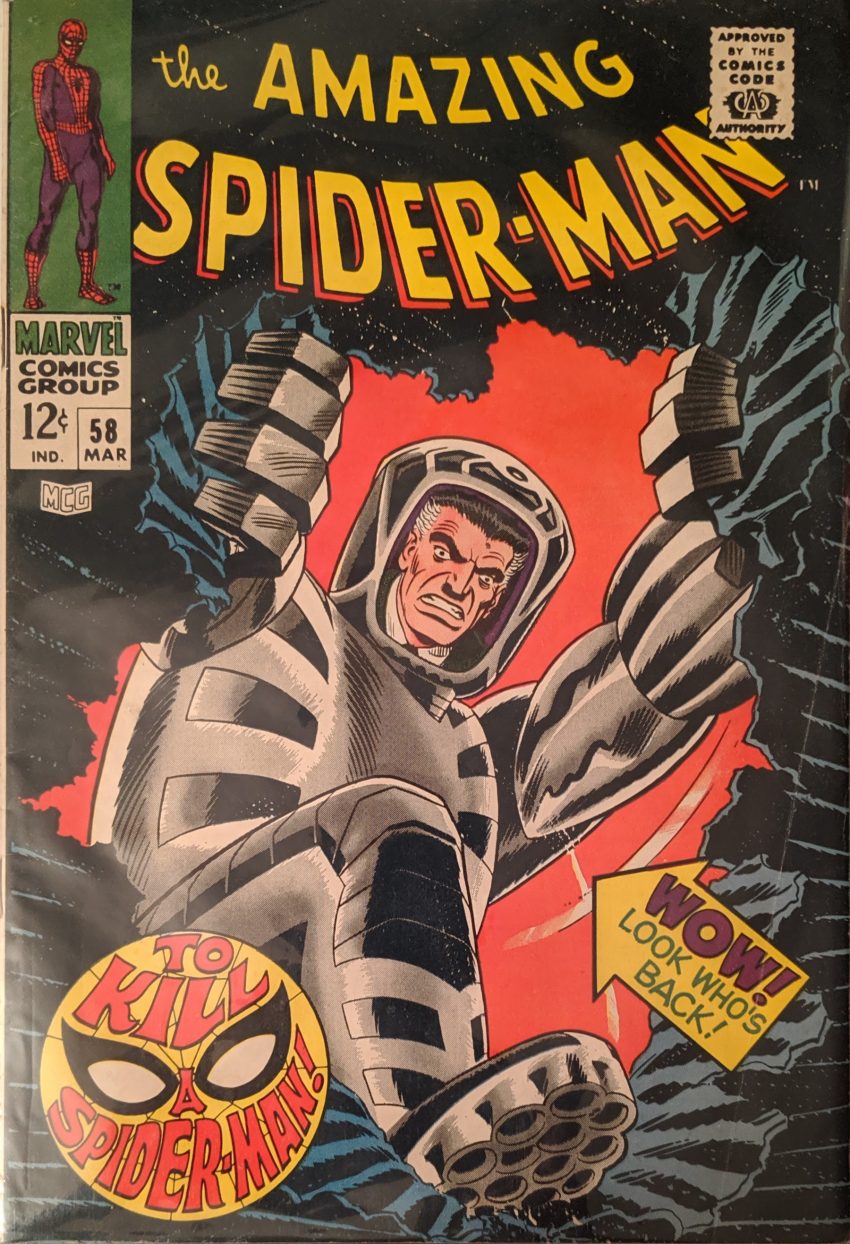 Alright. Spider-Man has had amnesia for what feels like forever. Maybe JJJ in another Spider Slayer will be enough to snap him out of it. Picking up directly from last issue, Ka-Zar swings the unconscious Spider-Man out of the park, saying that he wants to take him somewhere safe to learn about him. Meanwhile, Zabu is still in the park when the cops show up, and gives them all a scare before scampering off. Soon, on top of a skyscraper…

Thank goodness! That was getting ridiculous. It doesn’t feel like it due to the zig zagging reading order of this blog, but at this point, JJJ has only bankrolled one crazy robot. But he’s about to do another, because Smythe seems to have no trouble convincing him he’s got the problem solved this time. We leave JJJ to check in with John Jameson, saying goodbye to George Stacy as he prepares to head out to a new post. George assures him he’ll do everything he can to clear Spider-Man. Then we go see Gwen Stacy & Harry Osborn trying to visit Aunt May in the hospital, but not being allowed in. The nurse says Aunt May keeps calling for Peter.

Love to know how he “learned to sense the truth” in the jungle… “You bluffing me, gorilla?”… but whatever. Zabu’s down there causing traffic accidents. Good plan, leaving him to fend for himself. Ka-Zar has to save his trusty companion from the cops and wanders off, maybe for good? Kind of a weird way to exit the story. Spidey realizes Aunt May must be worried sick, but also that he’s out of web fluid, so it’ll take him awhile to get home. While he sees about that, JJJ goes to meet Smythe.

JJJ is shown how the new robot can crush concrete, and told it can hone in on anything with a “spider scent,” just like its predecessor. We won’t dwell too long on that. While JJJ is out funding illegal vigilante robots, he misses John coming by The Bugle to say goodbye to him. Also, Spider-Man is still trying to get home. He’s woozy from all he’s been through and having trouble keeping his balance. He manages to catch a ride and a rest on top of a bus for awhile, until he’s spotted, and then has to run for it. Back at Smythe’s lab, JJJ begins to take his Spider Slayer out for a spin just as an exhausted Peter Parker arrives home. He tries to call Aunt May, but she doesn’t answer, of course. He doesn’t know about her recent illness. But that’ll have to wait.

And so our webless, sleepy webslinger is thrown into combat with another goofy robot. Smythe quickly gets irritated by JJJ’s performance and commandeers control of the robot for himself. Spidey tries to hide behind a steel garage door, but the robot just tears right through it, and then reveals it’s got a laser on its head, too.

That’s a pretty fun bit. Smythe makes the robot crush the phone booth just as Spidey leaps out, having found Smythe’s address. This rankles JJJ, who really doesn’t want to kill Spider-Man, but Smythe is too far gone now, out for blood. JJJ only gets angrier as this becomes apparent, to his credit. Smythe thinks Spidey’s wasting his time since he & Jonah are at The Bugle and not in his lab, but Spidey hops in a window and says he’s found what he needs just as the robot comes ripping through the wall. But as soon as it does, the controls begin to malfunction.

I’m not sure I buy that, but please continue.

I guess it wouldn’t be. Well, I’m sure glad Spiey got his memory back. This issue was kind of all over the place. Who is… The Brainwasher? No idea. We’ll find out together next time.