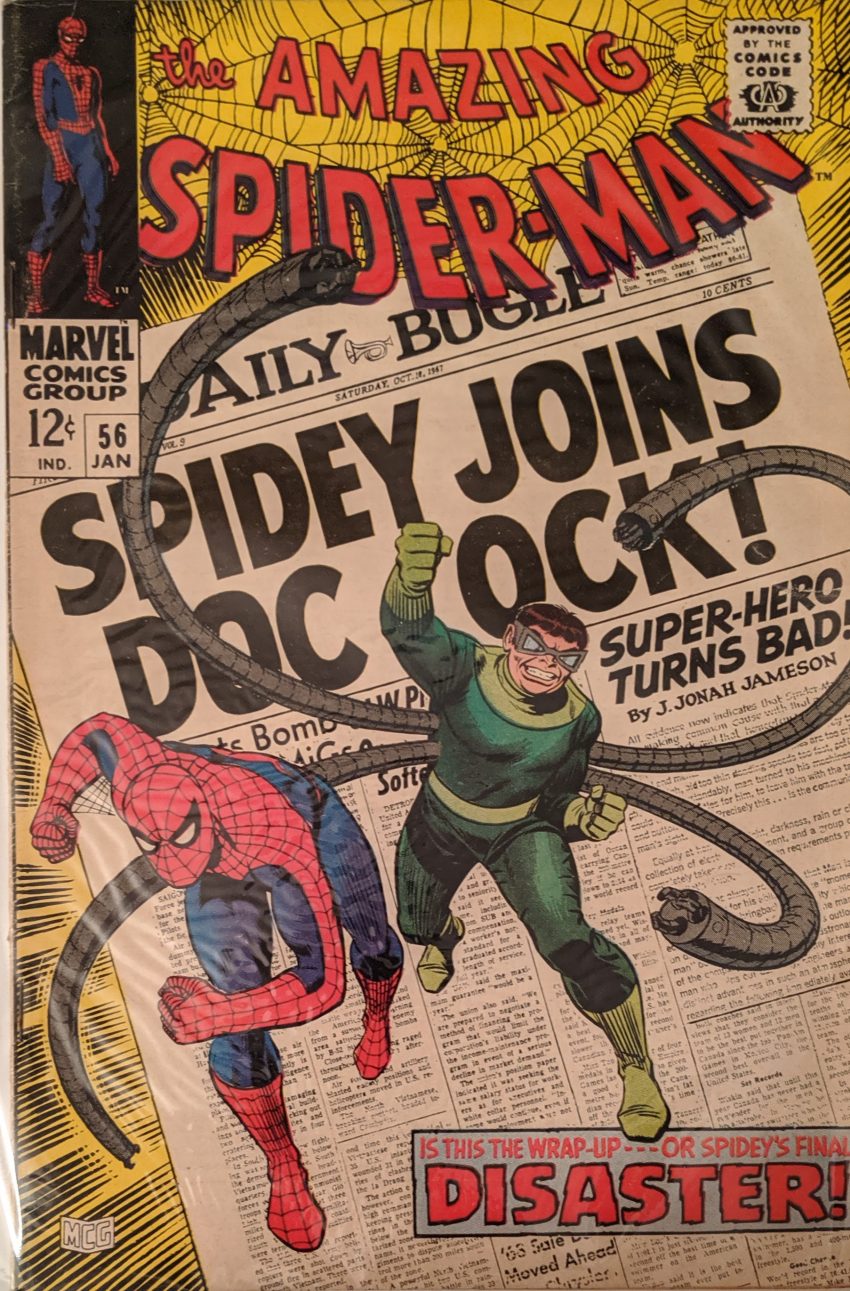 This looks bad for our hero! Let’s get right to it, as Spidey helps load The Nullifier into Doc Ock’s van and they all depart.

But as the van speeds off, the “isotopic element” in The Nullifier begins to overheat. Ock guesses that’s why they were bringing it to Stark, for repairs, but he’s confident he can do anything Tony Stark can. What level is Doc Ock supposed to be on, anyway? I guess I never thought of it, but he is kind of a super genius. Where’s he rate? Spider-Man notes to himself that he knows a lot more about science than the average person should as Ock gets to examining his prize. They reach Ock’s hideout, which Spidey notes he doesn’t think of as “our hideout,” and after hours of work, Ock decides he knows what’s wrong. The Nullifier requires “Isotope 16,” kept at nearby Ft. Tyson. He tells Spider-Man he’s gonna go steal it for him. Spidey doesn’t like that. Then Ock tells him to take his mask off. Spidey realizes Ock should know who he is already if they’re partners, and while he doesn’t understand the buzzing in his head, he’s headed in the right direction.

Otto ends the fight by saying he was “just testing” his partner, and that works. He shows Spidey some blueprints of Fort Tyson and then sends him on his way to steal the isotope. Spider-Man’s more confused than ever, but goes along with it. Then we check in with Gwen & Harry, who, we’re told, haven’t seen Peter in days, as they go to visit Aunt May.

It’s kinda sad that Peter never managed to get a real science job until, like, 2012 or something. Aunt May is right. Meanwhile, at a meeting of law enforcement people to try to figure out how to get The Nullifier back, John Jameson gets some sage advice from one George Stacy, making his debut in the book, who has come out of retirement from the police force to consult on this. He gets a call from Gwen, worried that Peter is missing. He says he can check accident reports for her, and seems to know she’s got feelings for Peter even if she herself hasn’t decided yet. Speaking of Peter, Spider-Man is about to become an actual criminal as he sneaks into Fort Tyson…

Spidey webs up a whole bunch of soldiers and smashes out through a window, dropping his map in the process. He thinks to himself that he could’ve easily webbed it up, but some part of him seems to want it to be found. And soon it is, and John Jameson, prepares his troops to go attack Doc Ock’s house. Speaking of Jamesons, you’d think JJJ would be pretty happy right now, but…

Never happy! A very sad Spider-Man returns to Doc Ock, feeling ashamed and wondering what kind of criminal he is. Ock is delighted, which only makes Spidey more uneasy. Then one of the goons notes that Spidey didn’t bring back the map, and when Ock is furious, Spidey responds in kind, and it’s once again fightin’ time.

Spidey webs Ock’s feet to the floor, throwing him off balance and making him loosen his grip, but as the two old foes fight, the army shows up. Ock’s goons out in the yard surrender immediately rather than get shot for Doctor Octopus (Who would? Why do any of these guys goon?), and then the authorities start tossing smoke grenades into the house. In the ensuing chaos, John Jameson gets ahold of The Nullifier. He sees Spider-Man seems conflicted, acting like he’s in a trance, and turns The Nullifier on Doc Ock, rendering his arms useless.

So the crisis is over, but our beleaguered hero still doesn’t know who he is. Maybe Ka-Zar can help him figure it out next time. This was a pretty wacky Doc Ock story. Having Spidey get amnesia is a bit goofy, but it certainly made for an unusual twist on their never ending battle. Back in the letter page, a DC fan is extremely upset about… something or other…?